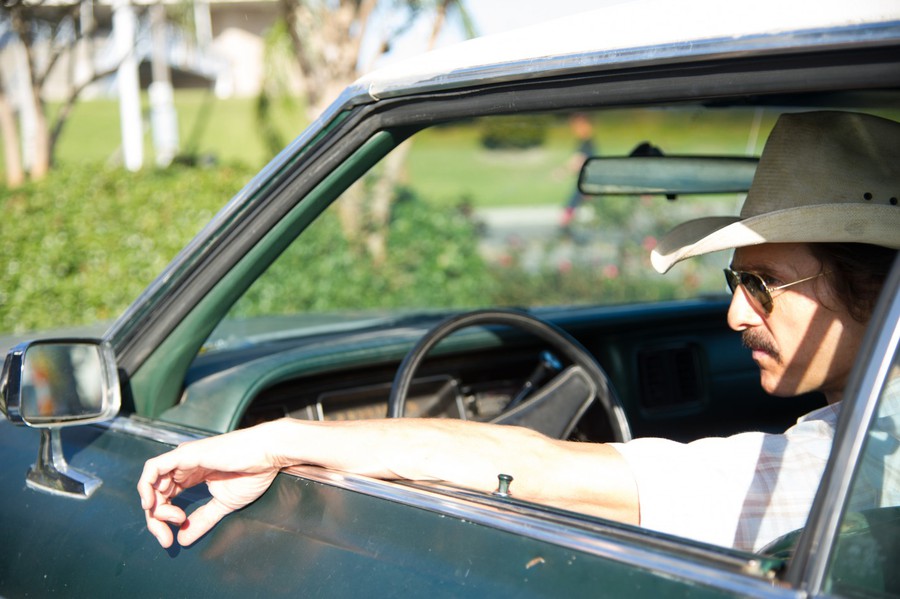 Matthew McConaughey stars as Ron Woodruff, a man diagnosed with AIDS and told he has one month to live.

Philosopher Georges Bataille wrote extensively on the bullfighting bull, which he used to clarify a larger point about human nature—just as the bull is most a bull when let out into the ring where death is certain and only to be delayed by vigorous battle, we too are most human when we accept our own situation to be similar to the bull’s. Dallas Buyers Club, directed by Jean-Marc Vallée, expands on this philosophy through the true historical figure of Ron Woodruff, portrayed by a gaunt, almost skeletal Matthew McConaughey. McConaughey, who lost 40 pounds for the role, becomes the bull in the center, supplying almost all of the humanity in Vallée’s film.

Ron Woodruff was a real man who was diagnosed in 1985 with AIDS. Before his diagnosis, he was a blue-collar redneck and rodeo enthusiast, engaging frequently in casual sex and cocaine use, his speech punctuated with curses and homophobic slurs. His diagnosis leaves him an outcast from his previous social circle and prejudiced against those around him in the same situation. In an effort to save his own life, he travels to Mexico to procure unapproved drugs; realizing their effectiveness and the demand for them back stateside, he decides he might as well turn a profit with his time left. “I prefer to die with my boots on,” Woodruff quips. His business, however, ends up being the only place to go for many AIDS victims in the area who are out of other options.

The power and subtlety of McConaughey’s performance are so impressive that at times he seems pulled down by the very good script and very good supporting actors.  McConaughey leaves good in the dust—he is great here, and an immediate Oscar contender. Vallée and the screenwriters should be praised for eschewing sentimentality and tear-jerk moments and trusting McConaughey’s performance to bring across the appropriate emotions. Manipulative writing or direction would have been easy given the subject matter—a man diagnosed with AIDS in the late 1980s who is told he has 30 days to live and turn his life around. The lack of cheers or tears when the credits roll shows a real commitment to Woodruff’s character and McConaughey’s ability.

The film scathes as a social commentary, showing brutally, though sometimes too ham-handedly, how willing we are to let those on the fringes suffer, and the infrequently examined issue that there exist taboos against certain people in our country to enter hospitals, no matter how desperately they require medical assistance. In an early instance, we find a construction worker, bleeding and writhing under a piece of machinery, with those around him unwilling to call an ambulance because “he’s illegal.” The deathly ill Woodruff is consistently threatened with arrest for his illegal drug use while in the hospital. The FDA, pharmaceutical companies, and hospitals pushing the ineffective drug azidothymidine (AZT) become the main villains of the movie as they profit from the AIDS epidemic. Even the overly bureaucratic drug testing policy is criticized for its inhumanity as “giving dying people sugar pills” by a disillusioned Woodruff. If our society’s poor and desperate are the bulls in the ring, the film seems to claim that it is those we would hope and expect to help who are often the picadors.

However, the staying point of the film is more philosophical and more uplifting. Like Bataille’s, Woodruff’s humanity is revealed when he is put in the ring; unlike Bataille’s bullfighting bull, Woodruff finds he is not alone in the center. The warmth of death at his neck is what pulls him out of his isolating lifestyle of obsessive pleasure seeking, drunkenness, and hatefulness, toward charity and appreciation of other people’s happiness. His disease and the stigma against it rob him of much of what he once enjoyed—“Ice cold beer, watching bull riding again, take a woman dancing. I want kids.” We are so pulled into this character that we smile with him during the rare sweet moment—a date (“Nice restaurant, beautiful woman. I feel like a human again.”), or even a hookup with another AIDS patient. For Woodruff and for those around him, the prospect of death (Bataille’s “void”) demands they reach out to each other, stop hating those around them and themselves. Woodruff ended up living seven years past his expiration date, largely through the small favors of others but also, we know, because living meant fighting, and he was fighting for more than one life.