Of Walking: A constitutional in color 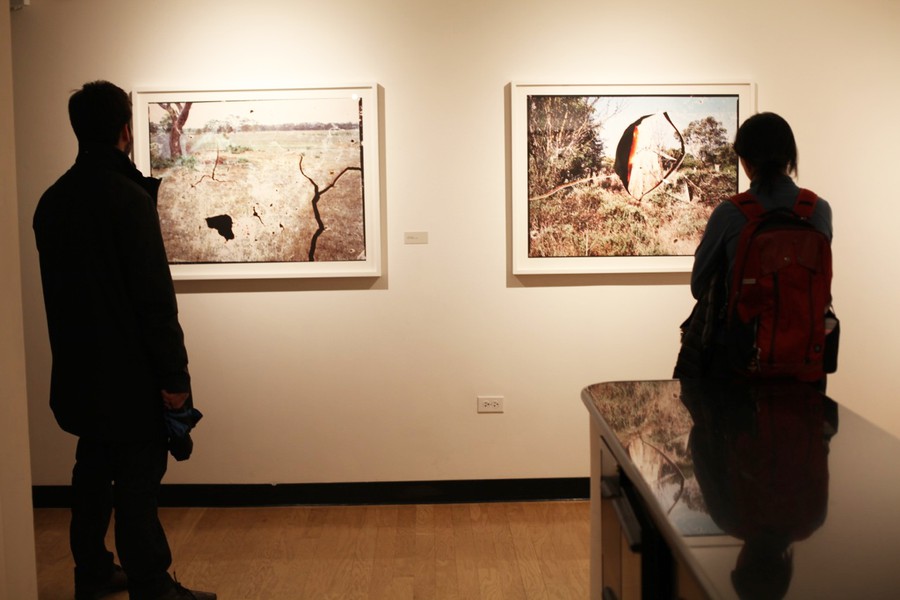 Photography has become a means of documenting a variety of physical activities, from playing sports to laughing to dancing to eating. The Museum of Contemporary Photography, located at Columbia College, recently opened an exhibit that focuses on one of the most widely practiced physical activities: walking. Of Walking, curated by associate director Karen Irvine and on display through December 20, showcases international works spanning the last six decades. The show explores the connection between walking and profundity.

Of Walking was inspired by a quote from Rebecca Solnit’s book Wanderlust: A History of Walking: “It is the movement as well as the sights going by that seems to make things happen in the mind, and this is what makes walking ambiguous and endlessly fertile: [I]t is both means and end, travel and destination.”

The photographs displayed show the different perspectives artists have taken to explore the concept of walking. Some, like Jim Campbell, have chosen to document walkers. Of Walking features Campbell’s “Fundamental Interval (Commuters)” (2010), which uses photography and LED lights to portray an abstract image of people walking through Grand Central Station in New York, as well as an earlier work of Campbell’s titled “Motion and Rest” (2002), which shows a figure walking and stopping using single pixels of light attached to a black panel.

However, the exhibit is not defined only by new media. Other artists chose to explore walking through a different lens, one in which the act of walking itself becomes the main artistic focus and photography a means to document it. For instance, the exhibit features the project Thrice Upon a Time by Australian artist and photographer Odette England, which presents pictures taken by negatives that were attached to the legs of England’s parents while they walked on the farm that they were forced to sell when she was 14. As they walked throughout the farm, the negatives were damaged, torn, and imprinted with dirt and debris—and it is these pictures that England printed and used for the project.

One of the first series of photos one sees when entering the exhibit is several large works by the Japanese artist Sohei Nishino. These works are collages of hundreds of black and white 35mm location shots that were taken in specific cities. The collage shows an urban circuit presented through Nishino’s focus on a central vein of a sort. For instance, in “Diorama Map London” (2010), the Thames functions as the central vein of the collage, while in “Diorama Map Tokyo” (2004), the railway works in a similar manner.

Of Walking presents an interesting and diverse collection of photographic works that explore the idea of motion and the emotional depth that can come through this motion in an array of unusual ways. And the Museum of Contemporary Photography, due to its small layout, functions as the perfect location for a broad-thinking yet intimate exhibit.

Of Walking will be on view at the Museum of Contemporary Photography through December 20.