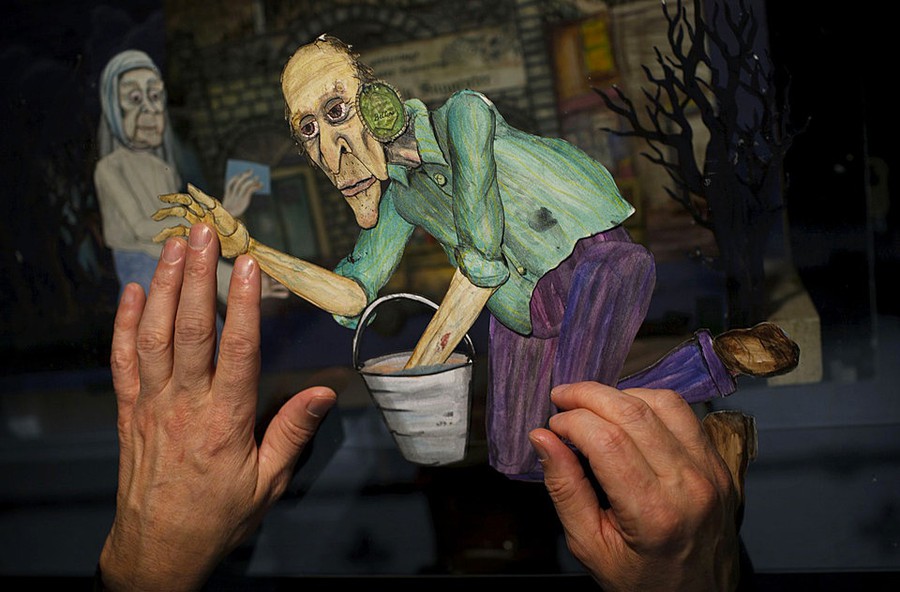 Rome wasn’t built in a day, as the saying goes, and neither was School of the Art Institute of Chicago professor and performance artist Chris Sullivan’s 128-minute epic animated film, Consuming Spirits. “Built” is a particularly apt term for Sullivan’s project, as each shot was constructed, animated, or acted out in stop motion, and then painstakingly filmed frame by frame. The timeline for his project? A staggering 15 years—and what a strange conglomeration of emotion and memory he’s made. After moving on from the Chicago Film Festival to strong showings at the Tribeca, Milan, and other international film festivals in 2012, Consuming Spirits is returning to the heartland on Friday night for a special event at the Logan Arts Center. The result is sure to be even more unsettling than the sack of Rome, sans blood in the streets. A Q&A session with Sullivan will follow the event.

The film follows three enigmatic small-town journalists—Gentian Violet, Victor Blue, and Earl Gray—as they negotiate the miasma of moral decrepitude and bad memories that infect the air in Magguson, a small rust belt town. The relationship among the three becomes more complicated as the film unfolds and switches between past and present.

Sullivan began the project in 1996. “Shorter films I just wasn’t interested in anymore,” he said in an interview with the Maroon. “It felt like there was something abbreviated about it. So I started working on this feature project. I thought I would finish in six or seven years, but I didn’t. It kept growing. I felt pretty lucky that it had questions and things pretty deep under my skin so I didn’t lose interest in it, or really know the answers. It was a somewhat organic adventure.”

Over time, Sullivan’s fledgling film grew into a hybrid of media. He incorporates wispy, surreal pencil drawings, which he envisioned as faded photographs with the saturated, disturbing colors of his hand animations. Fascinatingly complex, his animations were drawn by hand onto glass and moved using needles. The result is strange, joltingly articulated figures that are both grotesque and fascinating. The viewer is instantly repulsed and intrigued by the exaggerated facial features and intense colors that depict the cantankerous, eccentric journalists.

The film’s title brings up two prominent motifs: alcohol and ghosts of the past. Sullivan says that these things are very connected in the film. “One thing that’s kind of interesting is that, when I first started the film, it definitely had more to do with alcohol and with drinking, and as I kept working on it, I became more interested in the idea of the ghosts that haunt you, the things you can’t quite shake from your past,” Sullivan said.

Luckily for film lovers, Sullivan is already working on an entirely hand-drawn new project, The Orbit of Minor Satellites. “I’m getting this funny feeling that this film came to me and woke me up in the night and said, ‘I’m afraid you’re going to have to make me. This is important! Don’t fuck it up!’ But it’s kind of an exciting feeling—a sense of horrible responsibility.”  But let’s not get ahead of ourselves. We still have to grapple with Consuming Spirits.

Consuming Spirits is playing at the Logan Arts Center, Screening Room 201, on November 22 at 7 p.m.