Letter from Vienna: Having it all by taking none

Traveling is about turning off your mind, and your camera. 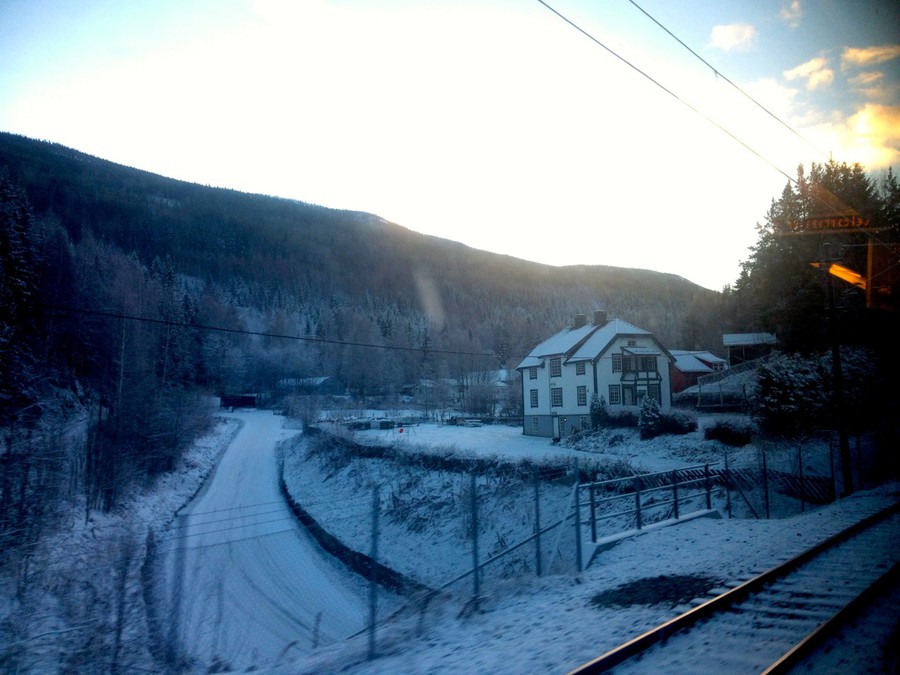 The sprawl of city buildings somehow grows brighter as the train reels away from the Stockholm station. I can see individual office buildings trapped in a pasty yellow haze, individual offices brightening with fluorescent light as individual hands blindly swat at individual light switches with individual agitated coffee-deprived aggression.

My head hits the seat’s ill-formed headrest, and I wake up way later in some icy tundra. It’s tinged blue-purple from the cruel smothering of a 3 p.m. sunset, Schiele-esque scratches of wood houses and decomposing bridges barely stretching over frozen rivers. Mountains curl upward as far as I can see and slip into a crystallized snowy fog. I see no people, save a vaguely anthropomorphic cushioned blob tacking up the message, “SUMMER BIKE TOUR, FUN IN FINSE,” onto a whiteboard. The robotic chant of the train operator beeps overhead to inform me, first in Norwegian and followed quickly by English so chopped and cross-syllabic that it startles, that we’re passing through Norway’s highest point at 1,220 meters above sea level. I decide to make good use of the completely empty cabin by stretching out across three seats to doze.

I turn over and the collective crunch and sweet scent of October’s red-and gold-peppered leaves knocks the breath right out of me again. I’m stretched out on a pile of them somewhere in the neck of the Vienna Woods: The sun has done an almost perfect backstroke and is now right overhead. I’m up off the ground and looking skyward for some clarity, but when I come back down, the trees are now people and the leaves are all cobblestone and I’m walking down another Quaint, Old-Timey, and Romantic European street in Bratislava. No wait, isn’t this Munich? Or Budapest? The prickling sensation of panic blooms as several city maps fold into one and I realize in frustration that I can’t sever one experience from the other. Instinctively I pull out my smartphone, open up Maps, and sink right back into the blue-dotted bliss of geographical familiarity. It’s both the logical thing to do and exactly what you shouldn’t.

Humans are blessed and cursed with the uncanny reflex of sensory compression: Memories are muted, desaturated, and categorized, in what is both an effort to safeguard us from constant sensory overload and an almost parental reminder that the past has passed. When this brainy defense goes up against a near-constant barrage of experiential novelties (i.e. travel), it short-circuits our intellectual hardware, and precludes any sensory understanding. The effect is well understood by the mental exhaustion of a couple hours at a museum: Eventually your capacity to appreciate the art crumbles under the stress of having so much to look at, and somewhere between leaving one gallery and entering the next, the idea of taking in another round of paintings feels more like a burden than a luxury.

In the same sense that the experiences of travel are bound by a fixed amount of time that we spend in a place, they are also restricted by a sensory monitor that can only process so much before it needs a break. Technology offers a sort of time-bending solution to this human problem by reducing some of the demands made by whatever experience we’re chasing. While a camera or guidebook buffers the ennui of overexposure, allowing us to bask in and maximize the value of the present for a while longer, the camera’s glass eye is also an additional layer between us and the world: It reduces the quality of experience in the same way it protects it. So maybe the problem is in the solution, or the mentality behind it. And perhaps that problem goes deeper than “Top 10 Things to Do in Paris” and “Best Bars in Berlin,” feeding into how we are told to remember, in terms of quantifiable objects that do have an apparent one-to-one equality with photographs.

After seven weeks in just as many countries, these are the problems I’ve been grappling with, and here are the conclusions I’ve reached: It’s not as simple as switching off your camera and trading in your phone’s map for an intuitive directional pull that you think will lead you to the best sushi in Copenhagen. It’s about wandering without any sort of expectation, without hang-ups or preferences, without burdening yourself or the city with the need to understand precisely where you are at any given moment. It’s allowing your mind’s eye to stand in for the camera frame, sometimes focusing in on legendary architecture, sometimes leaves in the river, and sometimes nothing visual at all. Really it’s about achieving that same head space of perfect unassuming contentedness you get back in Chicago (or any familiar place) when you’re kicking at fresh snow and waiting for the #6 bus to whisk you into the city or back to class, the unambitious in-between moment where things lose their relative value and instead mean only what they are in the present, in and of themselves.