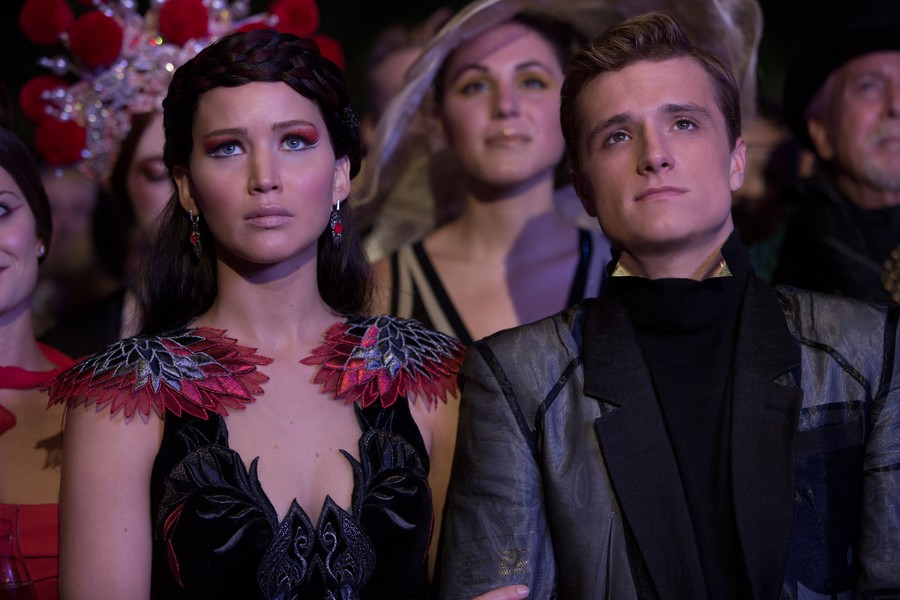 How far into a movie called The Hunger Games does it take to reach the titular event? The first movie takes over an hour to arrive at the games themselves, and its sequel, Catching Fire, takes even longer (approximately an hour and a half in a two-and-a-half-hour running time) for Katniss Everdeen (Jennifer Lawrence) and her fellow tributes to be sent into the reality TV battlefield that the books and movies center around. But this delay plays to the movie’s unexpected strengths, which lie not in its action but in its characters, acting, and dramatic tension.

The film takes place almost a year after the end of the first movie and sees its protagonists Katniss and Peeta (Josh Hutcherson) trying to adjust to their new lives as victors of the past games and as fake lovers—a move they made in the first movie to help maintain the government’s propagandist façade of well-being. After lower-class citizens begin looking at Katniss and other victors as symbols of uprising, President Snow (Donald Sutherland) decides to wipe out most of the living victors—including Katniss—in a special Hunger Games.

Director Francis Lawrence (I Am Legend) demonstrates a level of craft and patience beyond his range of experience in what is by far his largest project yet. Despite the aforementioned wait before the story reaches its central struggle, the movie maintains a very consistent sense of urgency throughout. The viewer is neatly transported through a long line of important plot points, from Katniss’s attempts to act for the cameras in order to protect her family, to the threats of uprising, to preparation for the games, and finally to the games themselves. The result is one of the best-paced movies of the year.

Some writers or directors might have been tempted to speed up or half-ass the pre-games part of the movie, but Lawrence understands that all of the struggles within the games themselves really come from the psychological and emotional struggles of the characters. Since those elements are set up before the games even begin, Lawrence devotes great effort and attention to detail on those scenes. Moments such as the one in which a citizen is executed during a protest, or in which Katniss and Peeta pretend to be in love for the cameras, are just as memorable and important to this movie as any scene in the games themselves.

All of the other requisite elements remain solid as well. The special effects are good enough that one doesn’t think about them while watching. The acting is a bit more nuanced from most of the actors (the addition of Philip Seymour Hoffman helps), though Lawrence seems to lack some intensity in her role when the scene doesn’t explicitly require it of her. Her performances in other films are still much better. Woody Harrelson continues his strong, darkly humorous turn as Haymitch, the drunken mentor, and Sutherland seems to relish the extra material he gets to work with in this sequel after a mostly forgettable role in the first movie.

In a time of so many soulless blockbusters and thoughtless cash grabs on young adult literature, Catching Fire is more than a cut above. It elevates source material that was already very good, so it will be exciting to see what director Lawrence can do when adapting the far weaker third book in the series.