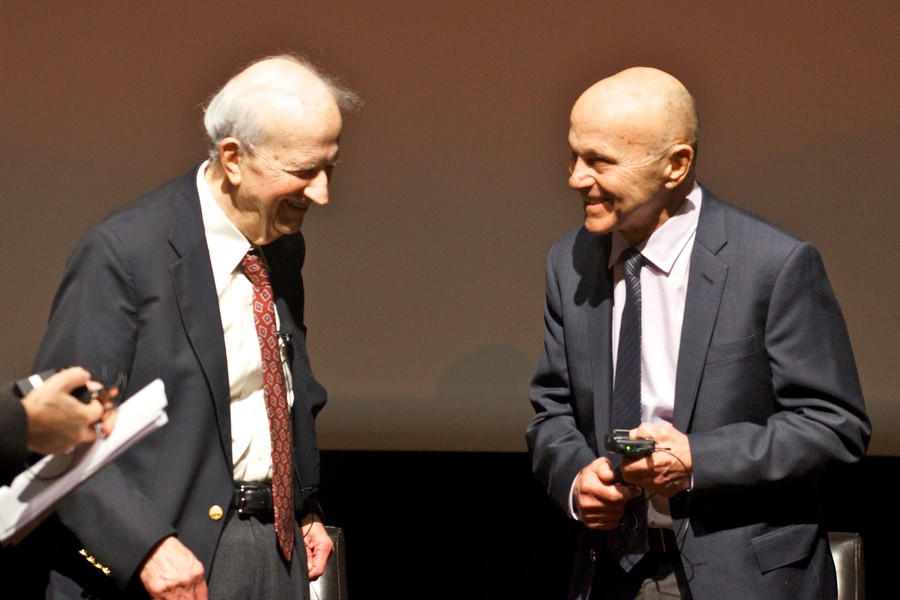 Multiple Nobel laureates debated the claim that the 2008 financial crisis disproved existing economic theories at a panel exploring the research of Professors Eugene Fama (M.B.A. ’63, Ph.D. ’64) and Lars Peter Hansen, who were awarded the Nobel Prize in Economics this year, held Monday afternoon at the Reva and David Logan Center for the Arts.

Heaton and Heckman discussed Hansen’s broad collection of research, including his far-reaching generalized method of moments (GMM), which Hansen developed in 1982 as a technique to help analyze economic models. Hansen’s work has provided an important framework for the research of other economists.

Cochrane explored Fama’s concept of efficient markets: a market where prices always fully reflect the available information, and price movements are unpredictable. This theory of efficient markets has many practical implications. For example, “professional managers should do no better than monkeys with darts at picking stocks,” he said.

Moskowitz clarified the importance of Fama’s more recent work on asset pricing, for which he was awarded the Nobel Prize.

“Prices are ultimately what determine resource allocation, where we invest as an economy into productive assets. Prices are going to determine that,” Moskowitz said.

Before inviting Hansen and Fama onstage to speak, Becker asked the panelists how they thought “the [economic] theories we’ve had survived the financial crisis?”

Heckman responded that the financial crisis “created some challenge about regulating the economy.”

“In some quarters of economics, we were unprepared,” he said.

Cochrane said that the financial crisis offered an opportunity to see how accurate theoretical economic models were.

“Sometimes with a big data point, you see how our simple models work beautifully,” he said. “Consumption fell like a stone; stock prices fell like a stone. Just like the models said they ought to.”

Moskowitz argued that the financial crisis offered a valuable challenge to economic theory.

“One of the things that I would say as a researcher is sometimes we like a good crisis,” Moskowitz said. “They’re events we don’t usually see in the data.”