"The Editor," creator of Hyde Park Romances, and "the Webmaster," administrator of UChicago Compliments, explain how their web pages came to be and reveal their own V-Day plans. 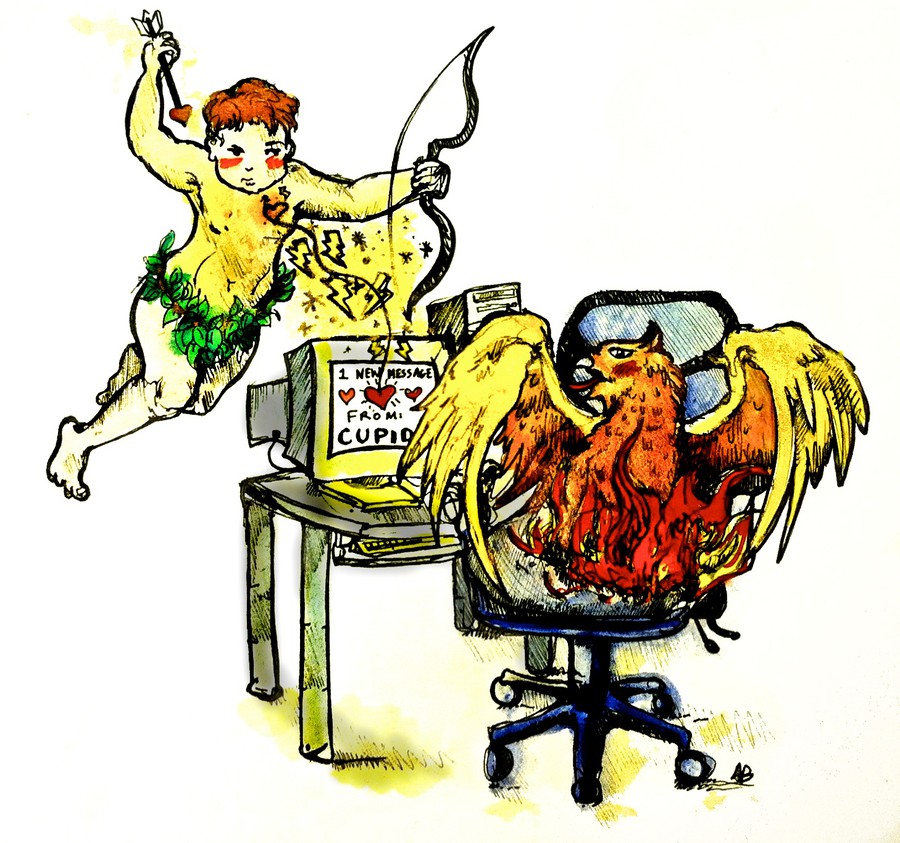 A student’s first impression of the UChicago social scene often comes via prepackaged cheesy one-liners. You know what I’m talking about: T-shirted nonsense, often gross or entitled, about quad squirrels and our GPAs. But for many of us, time here has softened those preconceptions. There’s a flipside to the infamous academic demands—sex happens, and there’s an incredibly progressive dialogue surrounding it, too (see Sex Week). Similarly, we have speed dating, date auctions, undie runs, and date clubs. And, like everywhere else, there’s an Internet component to it all as well.

This UChicago cyber date world has proliferated insanely over the past few months. A site called 2 Student Bodies promises quick and potentially anonymous hookups. If you’re interested but feel like savoring romantic possibility for a little longer, then there’s Love Professions UChicago, a Facebook page that allows for anonymous submissions of admiration. Perhaps the most notable of these Web sites include a Tumblr called Hyde Park Romances, which posts short stories both fictional and nonfictional about romantic incidents around campus, some contributed by readers, and the Facebook page UChicago Compliments. The latter has over a thousand “friends” and dozens of wall posts, to boot. Similarly, since its creation last October, Hyde Park Romances has put up over 500 posts (and boasts about as many followers). I was able to sit down and talk with the minds behind these sites about love, V-Day, and the role moms play in both.

My first question, of course, was about how it all started. For the blogger behind Hyde Park Romances, who wishes to be known only as the Editor, it started the way most things do: off-handedly, nestled amid the banter of friends. “I started it mainly for fun. My friends and I would often swap hookup stories, or even discuss random encounters on campus…and at one point, it was suggested that I start writing all this stuff down,” wrote the Editor in an e-mail conversation with me. “Once I started, my imagination sort of took over.” And with it came the masses. Submissions from all sorts of campus-types flooded her inbox. “I especially love it when alums write in.”

UChicago Compliments has a similar story. The page’s administrator, who we’ll call the Webmaster, told me in an interview that it started over last Thanksgiving break. “My friend who goes to Princeton, he introduced me to his new girlfriend. I was like, ‘How did you guys meet?’ He said what happened was that they had a similar site, Princeton Compliments, and this girl put a compliment on the site for him. You know, it was anonymous at first, and my friend was like, ‘Oh my God, I got a compliment.’ He was really excited, and then a couple days later she went up to him and said, ‘You know, the compliment was [from] me.’ Then, after that, they started dating. I thought, ‘That’s so funny. I’ll start that at UChicago.’”

The Webmaster emphasized that Compliments, as you might imagine, is, above all else, about complimenting. “The site’s good at making people happier. People like reading other people’s compliments; they like receiving compliments,” he told me. “Whenever someone receives a compliment, they say, ‘Oh my God, I needed it this week. I bombed a test; thank you, this made my week and my day.’ We get a lot of that.”

It’s not always just students who are grateful. “I got [a ‘thank you’] from a mom once,” the Webmaster laughed. “A mom said, ‘Thank you for this site; it’s so great for the student body.’ I don’t why a mom was on the site. I don’t know how she found out, but it was the greatest thing.”

Perhaps it was the mother of the Editor, as she seems to be particularly Internet-savvy. “My mother actually follows [Hyde Park Romances] and she’s my moderator,” the Editor wrote to me. “‘Some of the stories are really good,’ she’ll tell me on the phone, ‘and others are just okay. Try not to post the ones that are just okay.’ I don’t mind her comments. I could, however, do without her panicking when she thinks all of them are about me. They’re not.”

But these stories are about someone, in the same way that there’s a face behind every anonymous compliment on the Webmaster’s page. Is this activity mirrored in the real-life campus dating scene? I pressed the Webmaster for his thoughts on the matter: “I think the main issue with [UChicago], and I think this might be true of all college campuses, I’m not sure, is that we have a really strong hookup scene, but I think the dating scene is pretty weak. I think it’s [the culture of] our generation. People are very reluctant to ask the girl they like on a date. You think, ‘Well, I hope I’ll run into her at a frat party when we’re drunk and I’ll hook up with her.’ But you don’t think, ‘Well, I’ll go ask her to coffee.’” With Compliments, he hopes to rectify that mode of thinking. “I want the site to promote more traditional forms of dating. So you give a girl a compliment, and then you ask her to coffee, and I think it’s harder to do that. It takes a little more work, it’s a little scarier in a sense, but I think it’s better.”

Yet the transition from anonymous complimenting to real-life dating isn’t an easy one. The consensus amongst the Webmaster and his team seemed to be that while the site is a great first step, and “posting compliments takes some courage,” in the end there’s “no way you’d go up to the girl in your Gen Chem section and say the same thing you’re saying about her on Compliments.” There’s the desire to take the next step, but where’s the impetus? After all, everyone is in different situations, the Editor says. “There’s a lot of long-term relationships, not only between students here, but also a fair number of successful long-distance relationships too.”

So what is there to do then? “Honestly, I’m a big fan of just going for it, putting yourself out there,” the Webmaster says. “The worse thing that can happen is a rejection, and that’s okay. If more people [made an effort], the campus would be a better place. People are way too reserved. The dating scene would be easier. One rejection isn’t the end of the world. My main advice: Just go for it.” After all, it worked at Princeton.

And if you’ve not got your eye on any particular person, the Editor says, then “stop looking.” Hers is more of an Eat, Pray, Love approach: “Take all that effort and put it into making yourself the best possible version of you. Study hard. Actually do all your readings. Work out. Put some effort into how you look and feel…. Be open to new people and new experiences. Think long term about how awesome and interesting you can make yourself, and about how much potential you have. Love yourself first. And then you’ll find someone quite by accident when you aren’t even expecting it.”

And the Editor seems to be a woman of her word. When pressed for her own personal Valentine’s Day plans, she says, “I have a paper due that evening. So that’s my plan. Editing my paper… No. Writing my paper. I’m a ton of fun. Okay, seriously. The paper’s due at 6. I plan on spending some time with my friends after that, maybe grabbing a couple of drinks? No bad rom-coms, though. That’s too cheesy. And definitely no watching of Titanic.”

As for the Webmaster and his team, say one finally owns up to having left that anonymous compliment—then what? “On campus, around here, a good dating spot? For coffee, I like Classics… Or Robust! It’s an interesting place. Get off campus. After coffee, go downtown. In terms of dinner, Cedar’s…also, the Sit Down.” However, in the end, he emphasized that “it doesn’t really matter.” The effort, he assured me, is more important. The Editor seemed to agree: “Really, you can’t go too wrong unless you suggest the Reg, bookstacks excluded, or Noodles, the fishbowl where your personal space is approximately the same as the space you’re allocated in economy class on any given airline."