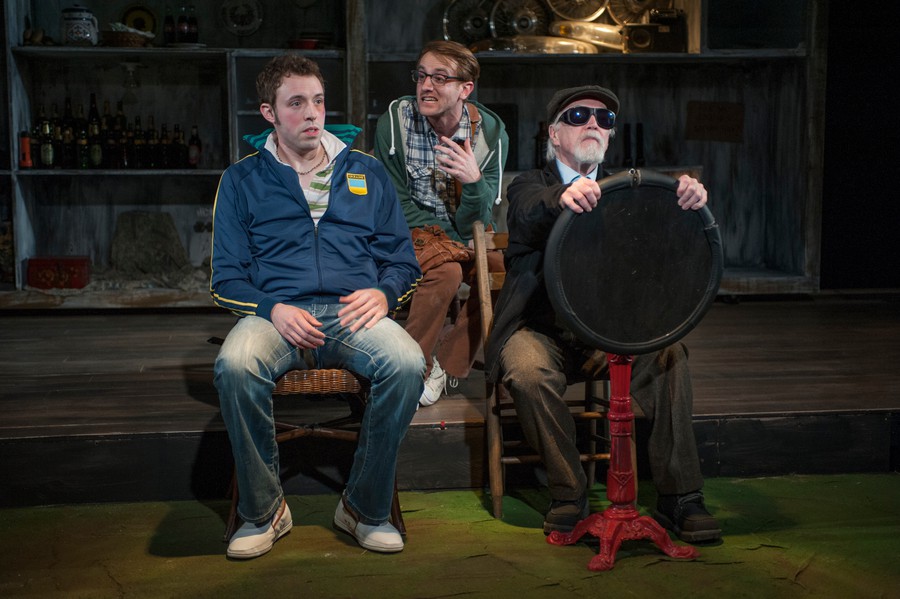 “The origin of a story is always an absence,” writes Jonathan Safran Foer in his 2002 novel Everything is Illuminated. In Next Theatre’s adaption of the novel to the Evanston stage, a warm and hilarious journey springs out of the void left by the Holocaust.

With only a disintegrating photograph in hand, an American college student named Jonathan Safran Foer (Brad Smith) sets out to find the woman who saved his Jewish grandfather from the Nazis during the Holocaust in a Ukrainian shtetl, accompanied by the ever-amusing Alex (Alex Goodrich), his young Ukrainian translator who speaks in “sublimely-butchered” English, and Alex’s grouchy and “blind” Grandfather (Bill Norris), also the group’s driver, who is haunted by memories of the war era, and his seeing-eye dog named Sammy Davis Junior, Junior [sic].

Next’s production, directed by Devon de Mayo, is the most recent adaption of this story to different media. It began when the real Jonathan Safran Foer embarked on a similar journey to the Ukraine after his first year as an undergraduate at Princeton in search of the woman who saved his grandfather during the Holocaust. The experience grew into his 2002 debut novel Everything is Illuminated, which won the National Jewish Book Award for Fiction. A 2005 film adaption by Liev Schreiber starred Elijah Wood as Jonathan, and Jewish writer Simon Block first adapted the novel to the London stage in 2006.

Unlike the film, the drama preserves the book’s ingenious yet disorienting structure: an epistolary conversation between Jonathan and Alex after their “voyage” in the Ukraine. In the drama, as in the book, we are left to Alex’s “not so premium” English for narration—which Goodrich nails—of what he “dubs” a “very rigid search” in an old car across the country from Odessa—which, Alex assures Jonathan, “Is very much like Miami”—for the lost Jewish shtetl of Trachimbrod.

While Alex writes in the present to Jonathan, Jonathan responds with sections of the legend he is writing about his lost relatives based on scraps of information handed down to him—from the fantastical founding of the shtetl in 1791 to its destruction in 1942.

The result is a Holocaust narrative that is anything but typical. Both Alex and Jonathan are third-generation victims of the war era—so far removed from the events that Alex has to ask Jonathan, “What is Yiddish?” since Ukrainian Jewish life was so completely erased.

The only remaining trace of the town lies in the house of an Old Woman (Ann Whitney) who turns out to be its lone survivor. (“A real Jew, here?” she exclaims upon seeing Jonathan.) Her country house, captured in an enchanting set by Grant Sabin, is packed to the ceiling with boxes, obscurely labeled “dust” and “darkness,” full of miscellaneous possessions of the Jews of Trachimbrod, which they buried as the Nazis approached. However, as Jonathan discovers when he is finally taken to the town itself, Trachimbrod is now just an empty field. Despite the Old Woman’s stores of seemingly everything from the shtetl, “There was nothing,” Jonathan remarks, of the family history he initially sought.

Just the opposite, it becomes clear from Alex’s staunch and abusive Grandfather’s refusal to drive to Trachimbrod that he is hiding a history of his own that links him to the horrors that took place there. Alex, in a way typical in former Soviet regions, has been left in the dark about his family’s dark past and must in turn face his own illumination.

Despite the play’s dark subject, the most amazing part of the story, preserved through Alex’s ceaselessly endearing approach to tough circumstances, is the nuanced friendship he develops with Jonathan—whom he never stops calling “Jon-fen.” While his Grandfather continuously threatens to stall the journey, Alex becomes immersed in it and won’t let it fail. “This is my story also!” he exclaims to Jonathan.

While Alex initially narrates, “Before the voyage I had the opinion that Jewish people were having shit between their brains,” he comes to see Jonathan as more than a client, or an American, or a Jew. “We became like friends while you were in Ukraine, yes?” Alex writes to Jonathan. “In a different world, we could have been real friends.”

Everything is Illuminated, Next Theatre, through March 31