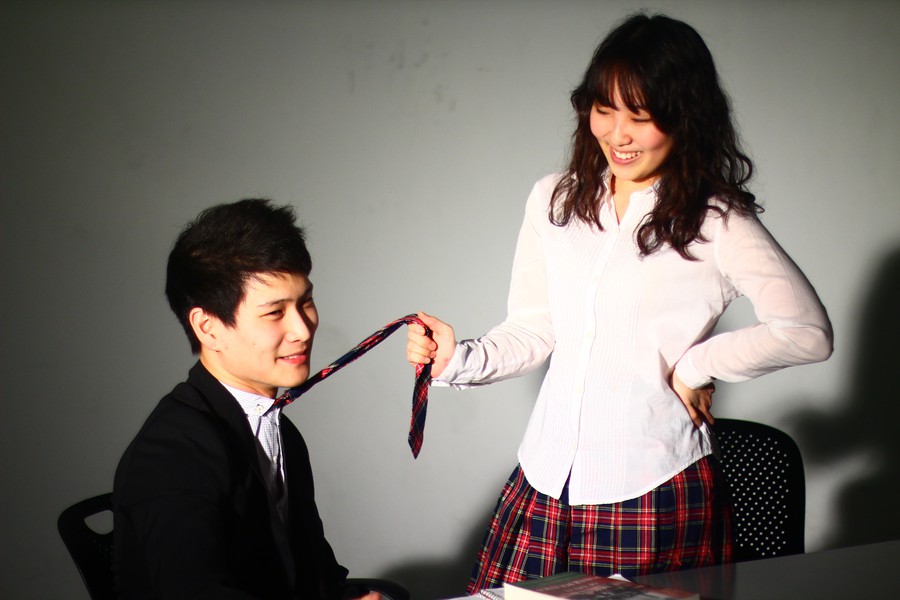 In this photograph of the leads in KSO’s winter show, first-years Kevin Kim and Jaewon Yoon, its hard to tell who’s tutoring whom.

Courtesy of the Korean Student Organization

Posters for My Sassy Tutor have been stuck on the doors of practically every bathroom stall on campus for the past week, and for that we have the Korean Student Organization to thank. KSO’s annual cultural production is playing this Saturday, March 2, at Mandel Hall. The directors are eager to have everyone come see the culmination of their 10 months of work and to experience a little bit of Korea.

The show is a romantic drama about a girl, Jooyoung (played by first-year Jaewon Yoon) who meets a boy—Jiho, a proud and impoverished student portrayed by first-year Kevin Kim—at her new school. Jooyoung is wealthy, but Jiho lives alone with his father and tutors other students to make ends meet. The two clash immediately. Though the directors were cryptic as to the specifics of the actual plot, they mentioned that issues of class, wealth, social division, and family create conflict in the play. They also emphasized the light-hearted and heartwarming love story, which comes out of the play’s modern school setting.

Third-year Jae Min Cha, co-cultural director of the show, explained that the title and plot both borrow heavily from Korean dramas. The tropes of this play are common in the modern Korean cultural and media industry, which, as of late, has increasingly gained recognition for its dramatic television and movie productions.

It is this pop culture that the directors wanted to draw on for this year’s show, second-year Kimberly Han, the other director of the show, explained. “Throughout the past, culture shows we have been dealing with very historical events,” she said, explaining how in the past few years the shows have dealt with ancient historical periods of Korea, or the modern political concerns dividing North and South Korea.

But while she doesn’t think those issues are unimportant, she says that this year the KSO wanted to have a change of pace. “[Modern Korean culture] is becoming very popular,” she said, “and it’s something important that we want to showcase to the audience.”

Cha says that they had the first draft of the script in spring of last year. “The draft is on its fourteenth version,” he said, and they have tweaked and edited the lines and transitions for the script to fit its characters.

“Individual lines we definitely tweaked to our own personalities,” added Kim about the rehearsal process. Yoon said that though she wasn’t thinking of acting at first, she has grown into her role as rehearsals have progressed: “I like the fact that [Jooyoung] really cares about the people around her, the more I think I do find what is attractive about her, so I think as rehearsals go on I find myself more attached to her character.”

Cha commented, “The characters in this play are rather eccentric…I think it’d be rather difficult to find someone in reality as vibrant and…with so much conflict, and dramatic overall.” This is another common trope of modern Korean dramas—exaggerated characters. Nevertheless, he added, “There are key elements in the characters everyone can relate to.”

The show will feature other aspects of Korean culture as well. To continue with the modern theme, there will be two modern dance performances, one performed by a female group and one by a male group, in tribute to the K-pop music industry, which has also been becoming increasingly well known outside of Korea. Cha said there will also be a traditional Korean fan dance, DJ turntabling, a traditional Korean drumming performance by the Koong RSO, and a musical fusion between a Western orchestra and the traditional Korean drumming group, directed and composed by a UChicago student.

Also, according to Cha, the catering will be excellent. “To really come to understand and know a culture is to sit down and enjoy the food,” he said, and he mentioned that there would be bulgogi (Korean barbecue meats), chicken, and lots of side dishes.

Though the show will draw much of the Korean community on campus, Han said, “We’ve been trying to market as much as possible to reach anyone, really, who’s not just Korean or interested in Korean culture, but to anyone who we can reach out to.”

Cha said that the purpose of the show is not only to give the experience of Korean food and culture to a Korean audience, but to include other cultural groups as well. As KSO’s main event of the year, the show is also meant to reach those outside of UChicago. KSO is inviting students from Northwestern, the School of the Art Institute of Chicago, and local high schools to give them more exposure to Korean culture.

“Honestly, it’s just really entertaining,” added Han. “I can really promise it will be a great show.”

By Olivia Shao and Estelle Higgins

Elementary-aged children through adults competed for a grand prize at the 2016 International Korean Traditional Performing Arts Competition, an event sponsored with the Consulate General of the Republic of Korea.