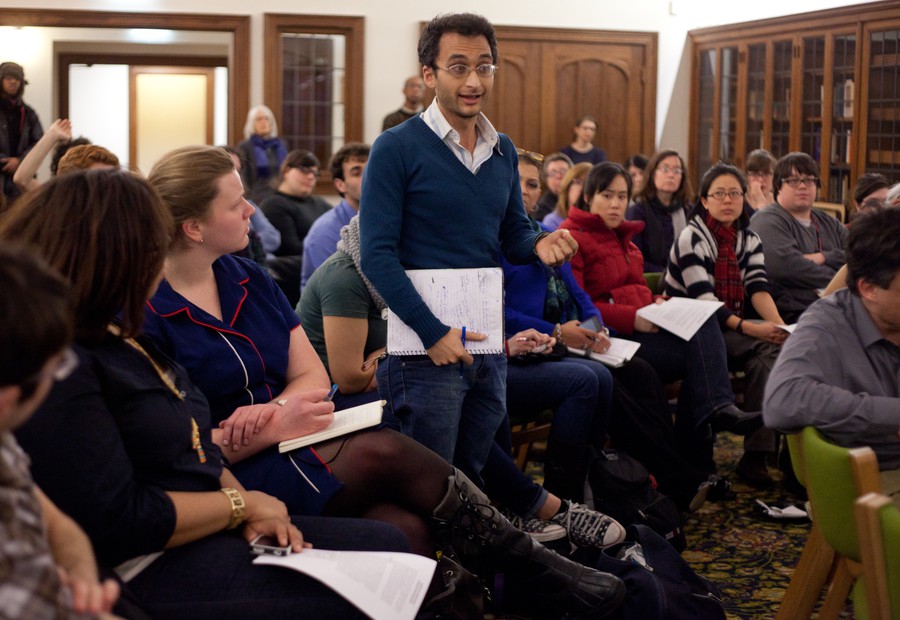 A crowd consisting of mostly campus and community members expressed their concern about the alleged opacity of the University’s investigation into the January 27 UCMC protest at an open forum led by faculty yesterday. The intention to hold a discussion on the protests was stated in a campus-wide e-mail sent by Provost Thomas Rosenbaum on February 1.

Many community members expressed frustration and confusion over the continued prosecution of the three arrested activists. The original complainants, a University of Chicago Medical Center (UCMC) official on the trespassing charges and a UCPD officer on the single resisting arrest charge, passed over prosecution to the State Attorney’s Office. Jacob Klippenstein, one of the arrested activists, revealed that the University had convinced the State to toughen the plea bargain offered to him and Alex Goldenberg from just supervision, to a different offer of conditional discharge and a no contact order.

Supervision would have allowed the charges to be left off Klippenstein’s and Goldenberg’s criminal record in exchange for periodic check-ins with the authorities. Conditional discharge means the two would not face sentencing for the trespassing charge, on the condition they not have contact with the UCMC. The charge would remain on their record.

Several other community members questioned why the police officers involved in the incident were not being individually investigated. The UCPD is currently engaging in what University spokesperson Steve Kloehn called a “broad review.” There is no individual review of the specific police officers accused of unnecessary force under way, Kloehn said, “because nobody has made an official complaint.”

Southsiders Together Organizing for Power (STOP) member Duff Morton explained that STOP decided to let the deadline for filing a complaint pass because of inequities in the process. Morton said that to file a complaint, “I, and every other eyewitness to the event, would have had to sign affidavits without the presence of attorneys. We are the same witnesses who will subsequently be called into trial. That puts us in an extremely difficult situation. The fact that the University’s complaint system doesn’t account for the legal jeopardy in which I’m placing my friends is [ethically questionable].”

Throughout the discussion, the conversation repeatedly returned to the confusion with the University’s review process.

“I think that one of the things that’s loud and clear in this meeting is the sense of the opacity of the decisions and the decision making processes at both the hospitals and at the senior levels of the administration,” discussion co-moderator Deborah Nelson, English professor and the Deputy Provost for Graduate Education, said.

Along with Nelson, the forum was moderated by Michael Dawson, political science professor and Director of the Center for the Study of Race, Politics and Culture; and Doriane Miller, Associate Professor of medicine and the Director of the Center for Community Health and Vitality. Executive Director of the Office of Community Affairs at UCMC Leif Elsmo and Assistant Vice President for Campus and Student Life Eleanor Daugherty were also present. All three activists arrested at the protest, including Toussaint Losier, attended the event.