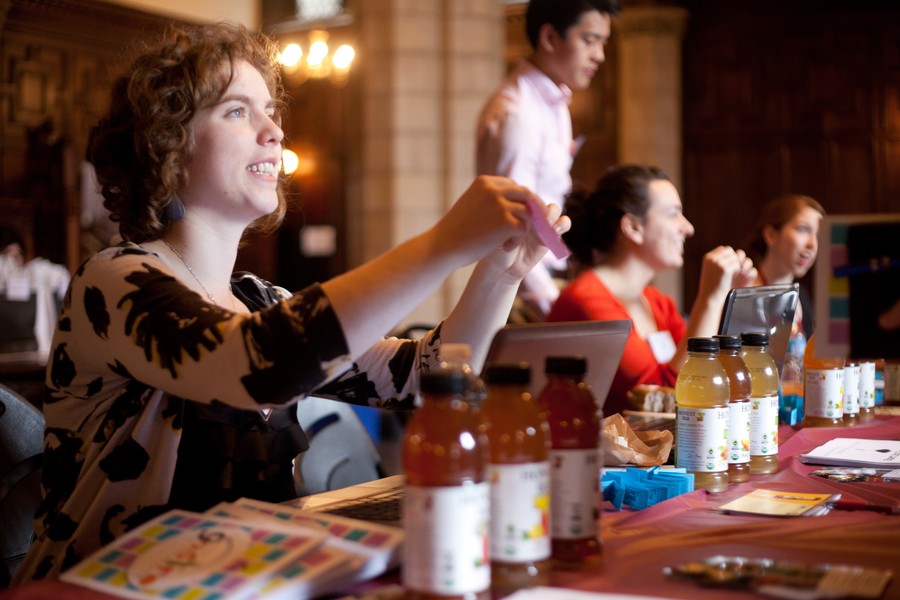 It’s no secret that Chicago is a city for diverse food experiences, with devoted restaurant-goers seeking out authentic ethnic cuisines at hole-in-the-wall locations, or vying for tables at big names like Next and Alinea. As foodies in 2013, we approach eating experiences with a heightened set of expectations for the ambiance, food quality, and presentation (somewhat due to iPhone photography), but it’s difficult to pin down what makes a culinary enterprise successful and what makes for a flop. The food industry experts and entrepreneurs of Chicago and beyond gathered at the EnvisionDo GastroConference held in Ida Noyes Hall this past Saturday to address this question, and revealed the strategic considerations that exceed mere passion for food.

Barry Nalebuff, a keynote speaker at the conference and the co-founder of Honest Tea, identified two major questions that a food venture must ask itself: Why will you succeed, and why will you succeed in the face of competition? Of Honest Tea’s own success as a beverage company, Mr. Nalebuff highlighted its unprecedented “two teaspoon” approach to sugar content, which was enough to add taste to the tea without adding excessive calories for almost zero impact on taste. The locally-sourced ingredients, the commitment to featuring quality teas, and a little bit of luck all contributed to Honest Tea’s near-overnight success when first introduced through Whole Foods markets in 1998.

Innovation doesn’t just pertain to the product itself. Major players in the Chicago restaurant scene such as chefs Iliana Regan of Elizabeth Restaurant and Josh Kulp of the Sunday Dinner Club mentioned a memorable atmosphere as a factor for their restaurants’ successes. Both Elizabeth and the Sunday Dinner Club reject the conventional RSVP policy (diners need tickets for Elizabeth, and require invitations from a referral-only mailing list for the Sunday Dinner Club), but provide unique dining experiences that keep the seating requests flowing.  Regan described Elizabeth as “the restaurant version of [my]self,” and explained the homey ambiance and commitment to personal attention that makes her guests feel comfortable and special. At the Sunday Dinner Club, the restaurant is located in an actual home, and gives diners the sense that they’re at a dinner party—Kulp’s newest venture, Honey Butter Fried Chicken, will be a similarly cozy environment.

Ambiance has so much power that it can transform an average-quality restaurant into a major hotspot. Regan mentioned Hop Leaf Bar on the North Side as an example of a restaurant with mediocre food but a fun, chaotic atmosphere that keeps her coming back.

Jason McKinney, co-founder of iCream Café, the innovative Wicker Park ice cream parlor that uses liquid nitrogen to make ice cream, is no stranger to struggle in the food industry. His initial ice cream parlor closed within two days of opening, and remained closed for six months. Rethinking his machines and branding, coupled with some serious perseverance, allowed his venture to make a comeback, and he is now set to have iCream branches open in Kuwait City and Dubai. Meanwhile, UChicago grad Teresa Ging (A.B. ’00) will be opening the second location of Sugar Bliss bakery in Streeterville. Ging opened Sugar Bliss Cake Boutique six years ago in the Loop, an area where she identified a lack of fine bakeries at the time. A savvy sense of quality control and cost and demand have restrained her from accepting offers to open branches in the suburbs, and the specific low-price items offered during the recession have kept her business thriving amid the arrival of brand bakeries in the Loop, such as Magnolia and Crumbs.

A newcomer at the conference was Alex Abbott Boyd, a UChicago grad (A.B. ’11) who started an organic cocktail mixer company, Cocktail Crate, two months ago. Boyd’s artisanal mixers are currently sold in select markets in New York City, but he hopes they will be available in Chicago within a few years (they can currently be ordered online). Boyd served conference guests samples of his mixers, and the enthusiasm for his products (particularly the “Ginger Bee”) gives hope that he, too, will be able to make his company stand out in a highly competitive industry.