The Maroons (13–8) were involved in two slugfests in Monmouth on Sunday, coming out on top in the first game of their doubleheader before falling short in the second. 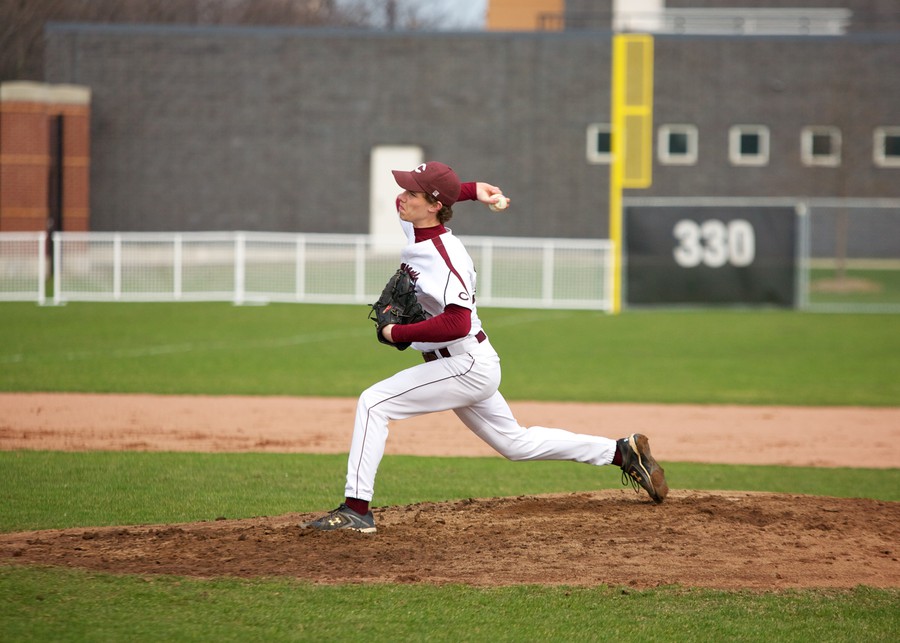 The Maroons (13–8) were involved in two slugfests in Monmouth on Sunday, coming out on top in the first game of their doubleheader before falling short in the second.

After splitting decisions in its two games on Sunday, Chicago is now tied with St. Joseph’s for third in the Independent Conference. Although there is over a month left in the season, with 15 games to go, the Maroons face an uphill battle to catch second place Covenant (22–10) and conference leaders Huntingdon (23–9).

Chicago came into the weekend riding a five-game winning streak and managed to extend it to six against Monmouth (5–16) as it hit its way to a 22–4 victory.  The day ended on a sour note, though, as St. Norbert (14–6) gave the South Siders a taste of their own medicine, racking up 16 hits en route to a 17–7 victory.

“We took some really good swings today and hit the ball hard,” third-year DH Ricky Troncelliti said. “We had a good approach and battled. As a result we had a lot of success.”

The approach worked from the beginning as the Maroons plated six in the first in their game against Monmouth and managed to knock starter Ray Gerard from the game in just 1.2 innings.

Third baseman Engel recorded eight RBIs on three home runs in Chicago’s first game. He was not the only Maroon hitting them out of the park, however. Troncelliti, fourth-year outfielder Ben Bullock, and third-year outfielder Brett Huff all went yard. Fourth-year left fielder Cinoman tripled in a run in the fourth to break the Maroon’s all-time career triples record. Cinoman now has 17 in his career and five this season.

“Kyle Nittis battled in the first game and settled down after a bit of a rocky start,” noted Troncelliti.

Nitiss wasn’t spectacular, but managed to prevent Monmouth’s scoring from getting out of hand, allowing four earned on six hits in five innings of work. He pitched three scoreless innings after a rough first two, which was enough to earn him the win.

The Maroons’ pitching staff never seemed to settle down in their game against St. Norbert as they allowed at least one run in every inning except the fifth. Third-year Alex Terry started for Chicago, giving up 11 earned on eight hits, including three home runs, in three innings.

Pitcher Brett Nohr went the distance for St. Norbert, but his seven innings were far from flawless. He surrendered seven runs and allowed 13 Maroon hits.

Cinoman continued his extra base success in the second game for the South Siders as he hit a two run homer in the sixth. Second-year catcher Brenden Dunleavy doubled twice, collecting two RBIs. Third-year shortstop Dylan Massey matched Dunleavy, recording one RBI on a sac fly in the second and another on a third inning single.

“We have to continue to execute in the field and at the plate and I’m sure our pitching will rebound soon,” noted Troncelliti.

The Maroons fielded a clean game against Monmouth, but recorded three errors against St. Norbert. No runs were scored as a result.

Hitting remains the team’s strength. At the time of release of the latest NCAA statistics on April 7th, the South Siders lead DIII with a .366 batting average and are sixth in scoring with a whopping 9.4 runs per game. This team is fifth in slugging at .509.

“We need to keep playing strong defense and have our hitting stay at a high level. We will get good pitching from some reliable guys this week,” said Troncelliti.

The Maroons travel to the North Side to face North Park (14-12) this evening before returning home to play North Central (11–13) tomorrow, ending the week with a rematch against North Park at home on Friday.

The game against North Park is scheduled to begin at 6 p.m. tonight.