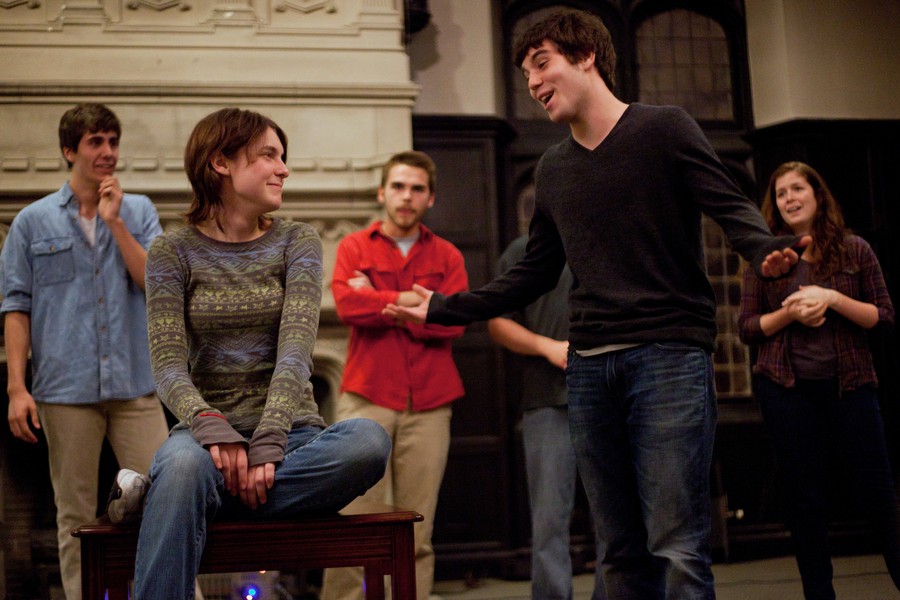 Upon arriving at the University of Chicago, comedy-lovers—a rare but not extinct species—are likely somewhat underwhelmed by what’s to be found here in the way of live humor. You can occasionally see stand-up at Logan, and I have once or twice had a chuckle courtesy of University Theater, but it remains remarkably difficult for an overworked UChicago student to get his or her laugh on without shelling out cash or trekking off campus. So, if you count yourself a fan of funny things or think that your life could benefit from some audible laughter free of charge, you may want to come to the Reynolds Club Third Floor Theater this Friday, where the members of the improv comedy group Occam’s Razor will take the stage, gesticulating wildly.

Founded in 1999 under “mysterious circumstances,” Occam’s Razor has since gone on to become one of the foremost improv comedy troupes at the University of Chicago. They currently play three shows a quarter to sizeable audiences and participate in improv festivals and competitions across the nation. Membership is open to undergrads and grad students alike, all of whom write and perform in equal measure.

Their show this Friday, Summer Opportunity Workshop Presentation, is a loving tribute to the horrors of the collegiate job search. Laughter being the best medicine, they’ll use their comedic stylings to soothe the pain we’re all feeling over whoring ourselves out to Internet startups or, worse yet, being forced to work another summer as a greeter at Men’s Warehouse.

I myself cannot speak to the quality of the show, as I haven’t seen it. No one has, not even the cast members themselves. Improv comedy showcases are, as a rule, remarkably different every time they’re performed. So how do the student-comedians of Occam’s Razor ensure that a show they think up on the spot is going to make people laugh with any kind of reliable consistency?

That problem, like so many in the world of improv comedy, can apparently be solved with two fairly simple maxims: Just go with it, and try to have a good time. “We think that what we do is funny, and generally we force it on other people, and if they like it, they stay,” said group president and not-Maroon-5-frontman Adam Levine (he’s half-joking here, but then that’s almost always the case). Fellow Occamite Tony Ditta put it in gentler terms: “If you’re authentic to what you find funny, people will tend to find that funny because they can tell you’re having fun.” Careful analysis of that statement yields an important truth: You can’t spell funny without fun. Improv, at its heart, is play; it’s a cooperative, non-competitive game in which the primary objectives are to create new things and to have a good time doing it. And, as in any game, if you’re not having a good time, you’re probably doing something wrong.

This is not to say that they’re just fooling around up there. Although nothing is staged or pre-planned, there are certain conventions that need to be followed to establish the scene and keep things moving in the right direction, and each skit has its pre-determined parameters. Lots and lots of practice also means that they’ve got a pretty deep bag of tools and tricks to draw on if things hit a snag or get really fucked up. All that being the case, the particulars of the performance remain completely spontaneous, and scenes can still go in some spectacularly strange directions. I’m told that, during one particularly lively show, one cast member mimed giving birth to himself and then engaging in autoerotic acts as said newborn, all without breaking character.

Of course, breaking (that is, laughing uncontrollably) does sometimes occur in this line of work. But the group was quick to assure me that laughing intentionally to save a dying scene (à la Jimmy Fallon) isn’t something they do. “If it happens, it’s because you’re having a really good time, and surprising each other with what you come up with,” Willy Calvin said. Again: Just go with it, and try to have a good time.

But at the humor vacuum that is the University of Chicago, just what kind of people join Occam’s Razor? Are they animated, highly-expressive goofballs who crack wise around the clock, or are their comedic sensibilities largely kept in check until they spring forth uncontrollably every full moon and terrorize the countryside?

From what I’ve gathered, improv doesn’t really bleed into one’s day-to-day life to a noticeable degree—Occamites don’t feel the urge to pretend the Reg is a pirate ship or respond to Chalk posts as Mr. T. Improv does not, as far as I know, help them climb the corporate ladder or fight crime MacGyver-style. The men and women of Occam’s Razor are largely normal, mild-mannered UChicago students, albeit ones endowed with preternaturally quick wits and the urge to get up on stage a few times a quarter and perform comedy.

This they do quite well. I’ve seen Occam’s a few times, and I’ve been repeatedly impressed with the group’s ability to pull tightly paced, well-scripted scenes out of thin air. They’re a cohesive unit, anticipating each other’s thoughts so smoothly that it’s hard to believe they’re making it up as they go (they actually are). They make liberal use of references to bad movies from the early ’90s and pretty much never miss a chance to make sexual innuendo. And, God help me, I think they’re funny as hell.

But there’s only so much a performer can do on their end to make you laugh. Improv, like all forms of theater, is a bit like hypnotism: It requires a certain degree of willingness and participation from its audience (more literally, in this case). You need to come into the theater wanting to be entertained, or else the trick won’t work. Don’t be that tough guy at the comedy show who tries to make it through the whole thing without cracking a smile. Whatever happens on stage, just go with it. Try to have a good time—it shouldn’t be too hard.