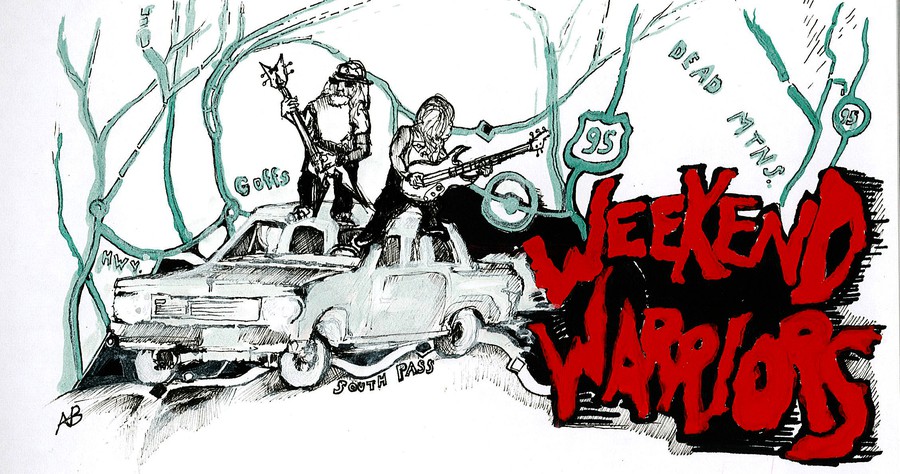 “Not that many people live by a code anymore.”

Stanton said it, Alex Cox filmed it, and a crowd of 70-something teenagers, early 20-ers, middle-agers, Ph.D. students, and film nerds watched it at Doc Films last Thursday. The movie was Repo Man, the third installment in Doc’s “Headbangersploitation: Heavy Metal on Film” late-nite series. Repo Man is a weird selection for a series on heavy metal exploitation movies. At its core, Repo Man is way more punk (Circle Jerks, Black Flag, Minor Threat) than it is metal (Suicidal Tendencies). It came out in 1984, a time when the divisions between a “punk” kid and a “metal” kid were pronounced, despite the fact that both forms of hard music were starting to rule the charts, concert halls, and video rotations on MTV.

I thought about these things as I sat and watched this flick unspool on a 35mm print. I thought about what a buddy of mine said about Harmony Korine’s new movie Spring Breakers, which is that it is not only bad, but also dangerous. I thought about coming-of-age movies—or “teen” movies—and how people experience Repo Man today, in an era when Dazed and Confused is “retro,” when the stringent genre of late-’90s teen comedy is dead, when people pay less attention to the importance of Mean Girls than they do to Lindsay’s 99th Nervous Breakdown and how Letterman feels about it, and when the Apatow crew hit its glorious peak with Superbad and has since gone to hell. The only movie about being a teenager that anyone wants to see these days is confined within a genre that you might call the Techno-Ironic Dark Teen Comedy, or TIDTC. (In way of examples, I refer you to David Fincher’s The Social Network, Korine’s Spring Breakers, Lena Dunham’s Girls for HBO, and, to a certain extent, Edgar Wright’s Scott Pilgrim vs. the World.)

I present to you two theses about Repo Man: 1) It is about freedom—therefore, it is about heavy metal—and thus has a place in Doc’s series on metal, and 2) It is about apathetic people, but it is not an apathetic movie like TIDTCs—therefore, it embraces film ideals that, in 2013, are in danger of slipping away.

To the first point. Repo men live by a code: “I shall not cause harm to the vehicle or to the personal contents thereof, nor through inaction allow harm to be caused to the vehicle or the personal contents thereof.” Most people live their lives trying to avoid tense situations: Repo men spend their lives getting in to tense situations. The repo man’s concept of a form of life is not unlike that of Wittgenstein: From it results a capacity to freedom of action and judgment of any kind of rule or circumstance that might confront a repo man. They are not “entangled” in rules. Quite the contrary, rules are what give repo men their freedom, because they establish a baseline from which the repo man can do anything at all. Heavy metal is similar. There is a “code” in the sense that the music should be, at its core, hard; it should challenge musical, social, political, and cultural norms. From these two things, hardness and challenge, the freedom of doing the thing can actually take place; i.e., these rules do not set a “boundary,” but rather, establish a form of life in which you are able to actually proceed.

Second: Post-Bowery ’80s hardcore punk—be it the West Coast or D.C. scenes—seems to have been borne of disillusionment and apathy with and toward systems. Repo Man embraces this ideal, and indulges in absurdities (“Let’s go commit crimes!” “Yeah, lets go eat some sushi, and not pay for it!”). Here is a key moment: Repo man Miller (every repo man is named after a beer) says to a disillusioned punker-turned-repossession-agent (Emilio Estevez), while burning trash and talking about how people are “into weirdness,” “People get so hung up on specifics, they miss out on seeing the whole thing.” The characters in Repo Man may be apathetic toward the world, but over the course of the movie, you come to learn, care, laugh, and grow with these people. Sometimes the things that they do are absurd,  but they are still people you can relate to, whom you know and recognize from real life. They may sometimes be vapid, but they are not vapid. Focus too much on the specifics—the “I get it” that you probably said multiple times throughout the vapid absurdities of Spring Breakers—and you miss out on the complete picture.

The difference between a movie like Repo Man and a movie like Spring Breakers or The Social Network is that it actually is about life. It’s not trying to manipulate you, and it’s not trying to “stimulate your senses,” as Korine said about Skrillex’s music in his latest film. It makes you feel, and it shows you, not unlike how Superbad did, that it is possible to be disillusioned with the world, or to sometimes act vapidly in it, while still having a capacity for life. A capacity for learning and loving is something people sometimes take for granted while Instagramming and Twittering and Facebooking and Formspringing their reality, a reality that is on the precipice of being eliminated. Reality’s challenger in the arena? The Techno-Ironic Dark Teen Comedy. Living ironically sucks. Living rules. Spring Breakers has no code, is about nothing, and also sucks, but luckily, you can see good movies like Wayne’s World and School of Rock in Doc’s Heavy Metal series this quarter. Never fear love.