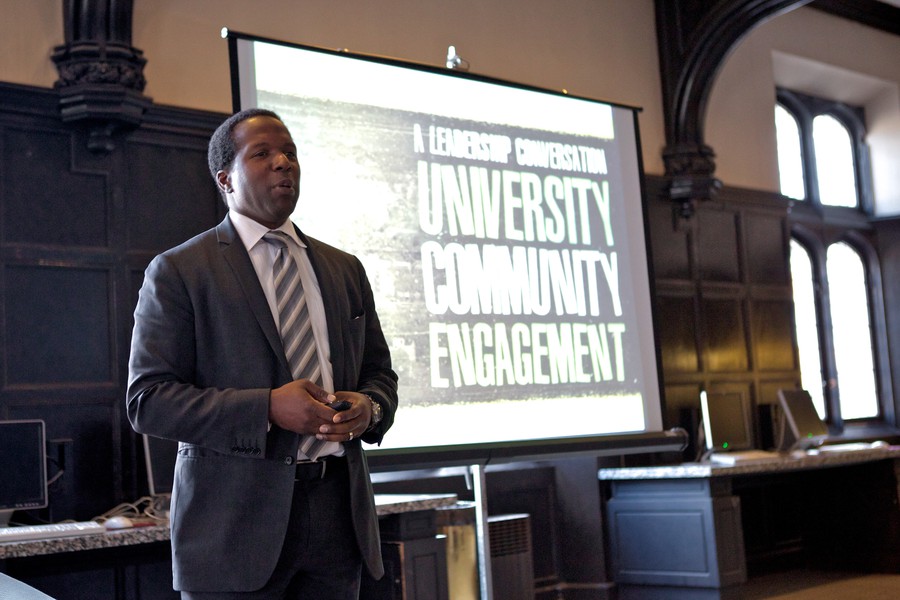 Vice President for Civic Engagement Derek Douglas headlined the third Leadership Conversation on Wednesday, which centered around the University’s community outreach efforts. At the SG and Office of Campus and Student Life–sponsored talk, Douglas announced the creation of a new student advisory council to work directly with the Office of Civic Engagement to provide a link between student and administrative involvement in the community.

Among the principles Douglas cited as part of a “New Model of Engagement” was a mutually beneficial relationship between the community and the University, saying the University is not “going to do civic engagement out of charity.”

Douglas outlined the three branches of the Office’s work: strengthening community relations through programs like UChicago Promise and the Neighborhood Schools Program, supporting urban research to develop the best strategies for civic engagement, and maintaining an urban initiatives portfolio of projects like the 53rd Street Development.

As a part of this model, Douglas said, “Students can play and should play a critical role in that effort.”

Lindau spoke about the inadequacies of health care on the South Side, saying, “We are a model of urban health. We’re just a bad model.”

However, she noted the work of the UCMC’s Urban Health Initiative and other organizations in conducting research and improving patient care on the South Side. For example, the South Side Health Care Collaborative, which was started by Michelle Obama in 2005, is a network of 35 health centers that meet to collaborate on health-related programs and initiatives.

Evans spoke about the goals of the University’s charter schools, citing high standards for behavior and academic performance as key to achieving them.

“We stay away from the soft bigotry of low expectations,” he said.

He also discussed how one of the University’s charter schools has a literacy program that has proven successful as a means of assessing students’ reading proficiency, a good indicator of whether or not a student is on track to graduate.

“UChicago has an ambitious and aspirational mission in that we believe that we want to prepare 100 percent of our students not just for college acceptance, but more importantly graduation from four-year colleges,” he said. “We believe in the basic premise that all of our young people are intelligent.”