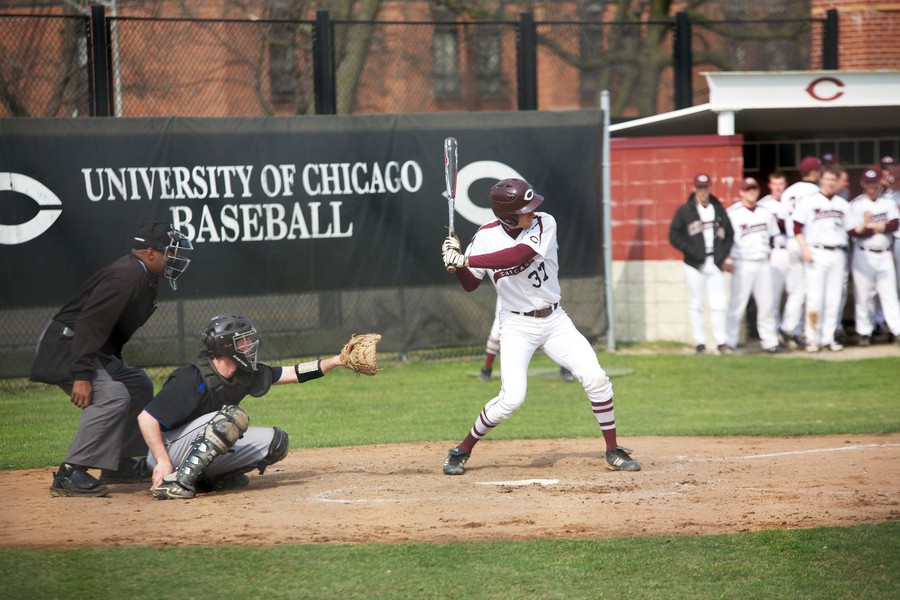 The Maroons had an unfortunate end to their season on Saturday as they lost both games of a doubleheader to Wash U.

Wash U started its game one assault early with two runs in the first off of two RBI singles by first baseman Zack Kessinger.

The onslaught continued with the Bears scoring three more runs in each of the following two innings, compiling a total of eight unanswered runs.

The South Siders’ bats came alive in the fourth inning. Fourth-year Jack Cinoman walked to lead off the inning. Second-year cleanup hitter Kyle Engel moved Cinoman into scoring position with a single. With two men on and no one out, fourth-year J.R. Lopez loaded the bases for third-year left fielder Brett Huff. Huff drove in Cinoman, but grounded into a 6-4-3 double play to add two outs to the frame along with the Maroons’ first run. The Chicago threat was quelled when third-year Ricky Troncelliti struck out, swinging to end the top of the fourth.

Before the Maroons could add to their run total, however, the Bears would manage to add two more to theirs, making the score 10–1.

Chicago put one more run across in the top of the fifth. Third-year Dylan Massey led off the inning with a single through the right side. Massey would quickly score from first when fourth-year catcher Tony Logli doubled, plating the Maroons’ final run for game one.

Wash U continued the previous inning’s pattern by answering with two more runs in the bottom half of the inning and scored its last run in the bottom of the eighth.

Although fourth-year Matt O’Connor struggled in game one to end the day with 12 runs (10 earned) on 11 hits with six walks and two strikeouts, third-year Alex Terry made a strong relief appearance, giving up only an unearned run on three hits in three and a third innings with three strikeouts and a walk.

Game two began with a more typical Chicago display, as the Maroons put up one run in the first. Fourth-year Ben Bullock led off with a single and scored with two outs when Engel reached first on an error by shortstop Andrew Goldstick.

Down 4–2 in the third, Lopez and Huff hit back-to-back singles with one out. Troncelliti and Massey would then string together two more singles for two runs to tie the game at four.

However, this was as close as the Maroons could get to the Bears, since Wash U pulled ahead with a total of six runs in the fourth and fifth innings and never looked back.

Chicago scored three more runs in the game to finish with a 10–7 loss. In what proved to be a disappointing day overall, there were glimpses of excellence from what is quite a talented team.

“J.R. [Lopez] had an awesome day at the plate,” third-year righthander Ray Kim said. “Although we didn’t end the season like we wanted to, we have definitely matured as a team.”

Kim came in to relieve in the second game, pitching two scoreless innings while only surrendering a walk and a hit.

“Whether it is coming in and holding a lead or stopping/limiting the damage, it’s a great feeling when you are contributing in order to help your team win in one way or another,” Kim said regarding his role this season.

Kim also made sure to credit the defense and its positive effects on the Chicago pitchers. “The left side of our infield has been tremendous in making plays, definitely reinforcing the pitcher’s confidence.”

The Maroons put together a great season statistically from a hitting standpoint as they were fifth in DIII with a .348 batting average, eighth in slugging at .482, and 11th in scoring with 8.3 runs per game (all rankings are through May 5).

Fourth-years Cinoman and Steven Schwabe were named to the first All-UAA Baseball Team.

Bullock, Engel, and O’Connor were named to the second team as well.