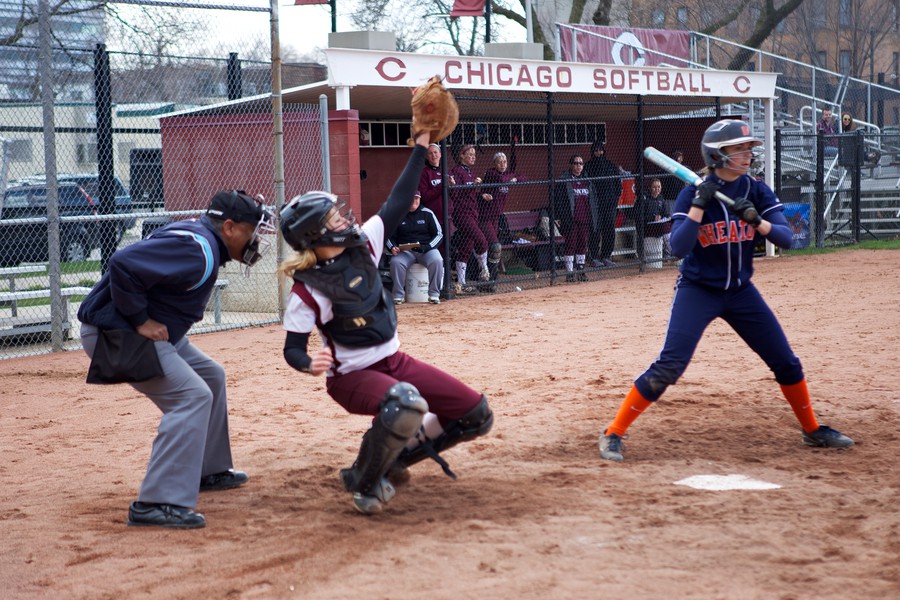 Following two victories against Beloit (7–29) on Senior Day, the Maroons split their last doubleheader of the season against Elmhurst (17–15) on Tuesday. The South Siders ran their record to 18–16, and this record will stand as the team does not expect to make it to the postseason.

The Maroons won the first game 6–2 but gave up the second game to the hosts 3–2.

“We are disappointed that we ended the season with a loss, but we are happy that we won the first game,” first-year Kristin Lopez said. “We wanted to win that final game, but it just didn’t turn out that way.”

The first game got off to a slow start with no runs crossing the plate in the first two innings. The Bluejays took the lead in the third on a two-run homer. The Maroons tied it up in the fourth with two RBI singles by second-year Raechel Cloud and third-year Kaitlyn Carpenter.

The real shift in the game was in the sixth, when the South Siders’ offense heated up with four runs. First-year Kathleen Kohm stepped up to bat with the bases loaded and two outs, and tallied a two-run single. Third-year Maddie McManus matched Kohm’s effort with a second two-run single, running the score up to 6–2.

Fourth-year starting pitcher Kim Cygan claimed the victory on the mound after achieving her first no-hitter against Beloit on Monday. Cygan pitched six innings and held defense tight, allowing only three hits and two runs. Second-year Emily Ashbridge took over for Cygan in the last inning with one strikeout.

The second game started quickly for the South Siders. The brunt of the hits came from Kohm and McManus once again; Kohm hit a double down left field for one run, and McManus added to the Maroons’ lead with a run from a fielder’s choice.

However, besides the first inning, the Maroons were lacking in offense and it hurt their overall performance.

“I feel that we put forth the same effort [in the second game], but our offense did not stay on top every inning,” Lopez said. “We won the first inning by scoring first, but after that we didn’t score.”

Elmhurst shortened Chicago’s lead to 2–1 with a sacrifice fly in the fourth, and tied the game in the fifth with an unearned run. The Bluejays earned the win at the bottom of the seventh with an RBI single, bringing the score to 3–2 in the host’s favor.

Though the season may not have wrapped up the way the Maroons wanted, they remain hopeful of success next year. The South Siders will lose graduating fourth-years Cygan, Jacqueline Ryan, and Vicky Tomaka for next season, but will be retaining the vast majority of its squad.

With a team-high batting average of .382, Lopez will lead the South Siders on offense along with Carpenter, who batted .368 this year. Ashbridge and first-year Jordan Poole will have big shoes to fill on the pitcher’s mound but seem up to the task, only giving up 2.90 and 3.04 runs per game respectively.

The Maroons have reason to be confident of improving on what has been a somewhat inconsistent season.