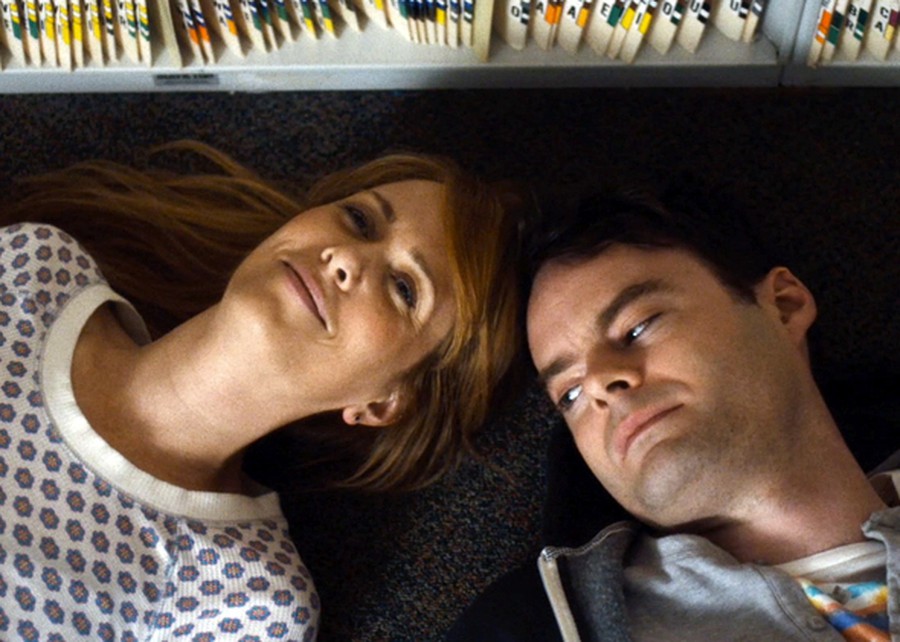 Kristen Wiig and Bill Hader are national treasures. In fact, I’d argue that their dual departures were the major stumbling block over which SNL lost its footing last season. So when I heard that The Skeleton Twins was finding success in the festival circuit, it was cause for celebration—Hader’s been sidelined for too long, and Wiig’s last effort, Girl Most Likely, ran at best like the actress’s annual charity case.

Hader and Wiig’s chemistry sells the vehicle miles beyond its capable script or earnest, if sometimes distracting, direction. They lean into each other, and find on one’s shoulder the perfect nook for the other’s head. Their respective characters, Milo and Maggie, laugh at fart jokes and get high on various gases from a dental hygienist’s office. Together they’re mercury, dangerous and lilting, perceptive to temperature in a manner that cannot be learned but rather must grow organically, over years. Dud family flicks come and go, but never have I seen one so astutely capture what it means to be saddled with loving someone who’s so close and yet also a world away. This is siblinghood, messy and tragic and worth it.

Maps to the Stars

Screenwriter Bruce Wagner wrote Maps to the Stars while working as a Hollywood limo driver in the 1980s. I didn’t realize this while watching the film, but in some sense I felt it: David Cronenberg’s latest has the vibe of a dated origin story, like some sort of forward-looking odyssey that was only unearthed after we’d all been living in its world for a little while. Maps is an Oedipal dip into the nepotistic cesspool that is Tinsel Town, and although the uneven script at time defeats him, Cronenberg finds a sticking point in stars Julianne Moore and Mia Wasikowska.

Moore plays Havana Segrand, a semi-washed up actress who’d dance on the grave of a dead baby to get the film she feels will define her—an art-house remake of the very movie for which her late mother became an icon. In between a ménage-a-trois and insane, John Cusack–driven psychotherapeutic message sessions, Segrand spends her days getting berated by the ghost of her dead mother. Colinearly, Wasikowska plays Agatha Weiss, a young burn victim who’s come to find work in Hollywood on a bus ticket footed by Carrie Fisher, playing herself.

There are insane, alienesque child actors and scenes of self-immolation, but nothing is more startling than Moore’s Segrand, who at one point shouts for Agatha to go buy her some all-natural laxatives from Whole Foods whilst sitting on the toilet. Moore has made a career of going for broke, and Maps popped up on my radar initially as the film in which she’d finally get her Oscar. Distribution woes have dashed these hopes, but there’s still something to be had from watching Moore anchor a movie by sheer force of her will to articulate insanity.

Rose Leslie (“You know nothing, Jon Snow!”) and Harry Treadaway star as Bea and Paul, a recently married couple whose honeymoon vacation at a secluded lake house goes awry, as honeymoon vacations at secluded lake houses are ought to do. Leslie is a world away from Game of Thrones’ Ygritte, trading fur cloaks and arrows for denim Bermuda shorts and boat shoes. And I can’t underplay the shift away from her warm layers; this movie is about bodies, and embodiment. Just as we see the sharp angles of her knees and elbows as she bends over to hook a worm, so too does the camera linger on the bruises that are the only mark of the movie’s central tension: a strange encounter in the woods one night that leaves Bea seemingly a different woman than she’d been before.

The lake house—which belongs to Bea’s family—is decorated with hollow wooden ducks in which Bea hid treasures as a child. Their quaintness morphs into something alien as Paul hurls them across the room, seeking answers as to what happened to his wife in the wake of her silence. Violence registers quietly in this film, in much the same way as it did throughout last year’s Under the Skin. Both films concern themselves with female bodies and explore the ever-present tension of what it means to be female in a world constrained by men. But whereas Skin's central conceit is that star Scarlett Johansson’s body is not her own from the start, Honeymoon complicates—or simplifies, depending on who you ask—that premise, and situates itself on an axis of before and after.

White Bird in a Blizzard

Doc Films’ summer screening of Mysterious Skin (2004) was a welcome reminder of director Gregg Araki’s unparalleled style. Teenagers are to Araki what, say, depressed women are to Von Trier. Though where Von Trier’s camera lingers on naked bodies in order to elucidate a sort of despondent rawness, Araki celebrates texture and fur, bright eye shadow and costumery that’s almost Warholian in its desire to replicate a culture that might never have existed. Araki’s latest, White Bird in a Blizzard, continues this trend, starring Shailene Woodley, Eva Green, and Christopher Meloni as a miserable family fighting the monotony of late ’80s suburbia. It’s angst as usual until Eve Connor (Green), matriarch, goes missing. The film’s based on the novel of the same name, written by Laura Kasischke.

This is Woodley’s The Dreamers, incipient and sexual in an exploratory way. Araki’s camera stares at her body with curiosity but it never feels predatory; this is a film about a young girl who’s grown into herself just as her mother’s stepped out, about being young and craven and bored. Green plays a woman whose sexuality represses her, a contrast from other films in which it was made to define her. Eve Connor is trapped by domesticity, a woman stronger than her constraints and yet still no more capable of undoing herself from them.

While the mystery of where Mom went is Blizzard’s easiest selling point, it is also the film’s last concern. Araki establishes his movie stolidly within the confines of Kat’s head; we are not to be concerned with anything that doesn’t concern her—including the disappearance of her mother. Attention to the period is limited to hair crimping and a killer soundtrack, and yet all of this selectivity might be the film’s strongest point: It’s insular and weird and not a little uncomfortable. In other words, it’s a teenager.