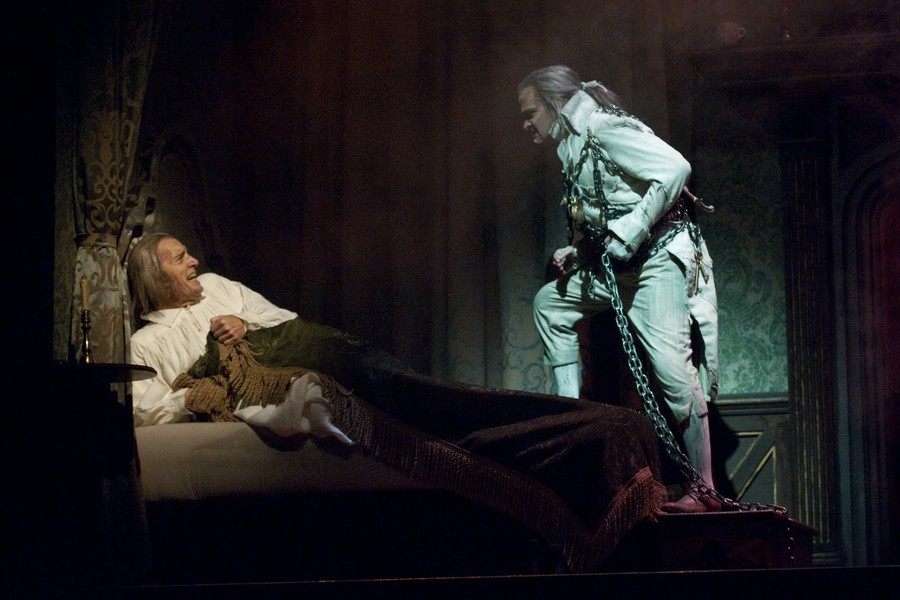 Goodman Theatre’s annual production of Charles Dickens’s A Christmas Carol began running last week and continues through December 28. The production, directed by Henry Wishcamper, is in its 36th year and is a major event for the theater. The prominence of the event is accented by a bazaar-like state of affairs in the theater’s lobby, emphasizing the sale of theme-oriented paraphernalia paired with hot chocolate, eggnog and seasonal cocktails, and beneath ringing caroling music. Just as the holidays are a ritual of their own, this production is a special event for Chicago’s oldest not-for-profit theater.

For the production to succeed, it must get Ebenezer Scrooge right.  It's character stands central to the story; he is in practically every moment of every scene, and it is upon his change of heart that the tale’s importance lies. It is an involved, tortuous, and exhausting role that Larry Yando embodies with panache, charm, and humor. He never fails to evoke the rumble of audience laughter every five minutes or so, and it is with Yando whom the audience comes to sympathize (the mark of a successfully rendered presentation). To ignore the set design, however, would be to ignore a significant share of the production’s magic making.

Think of the holidays: Think of cold, crowded streets made warm by bustling bodies, crackling logs burning slowly before the grates of the fireplace; think of whispering smoke trailing deeply into crisp air, and early evenings lengthened by sonorous multi-course meals, capped off with pies and wines and puddings and ales. Think of soft sofas, and gentle, all-too-familiar, music; think of sounds: laughter, voices, the hissing and popping of things heated or cooking, and the slow sweeping gusts of gentle snowfall.

Think of ghosts—no? Think of misers and money and bookkeeping tables and gains and losses.

Dickens made a heartwarming point when he published A Christmas Carol to immediate success 171 years ago. He also profoundly shaped the understanding of what Christmas was and what the holiday season would become.

It is a strange thing to realize, but as estranged as Dickens’s colorfully charactered and grime-besmirched London may be from our WiFi-enabled one, that world still manages to be both familiar and inviting. And Todd Rosenthal’s work on the eccentrically atmospheric set creation does well to make an outlandish and distant place feel at home. Dickens’s shadowy gas lamp–lit streets, brooding factory buildings climbing over and toppling onto each other, and hearth-warmed homes are familiar to our collective memory, and the production succeeds by playing on what is expected of a particular down-and-out Dickensian setting by adding slight quirks (asymmetrical structures, creeping fog, moving sets) for an otherworldly though intimate experience.

The season, for one hundred seventy-one years, has been colored and characterized and altogether warmed by Dickens’s 1843 novella. A Christmas Carol has prominently shaped the evolution of the holiday season since its publication and, though dated, the tale still holds a seminal position in seasonal tradition. Goodman Theatre’s rendition of the tale succeeds on all levels expected; but it must be understood that at heart, Dickens’s tale is a family story, albeit one whose moralizing tone and sentimentality can come off as sometimes too melodramatic for our pre-eminently self-aware and self-critical moment. Nevertheless, Goodman’s production operates well with what is given to make a somewhat sappy mid-19th-century story retain and express a little seasonal magic.

A Christmas Carol runs through December 28 at the Goodman Theatre. Tickets available at goodmantheatre.com/joy. Tickets start at $27 for weekday performances.