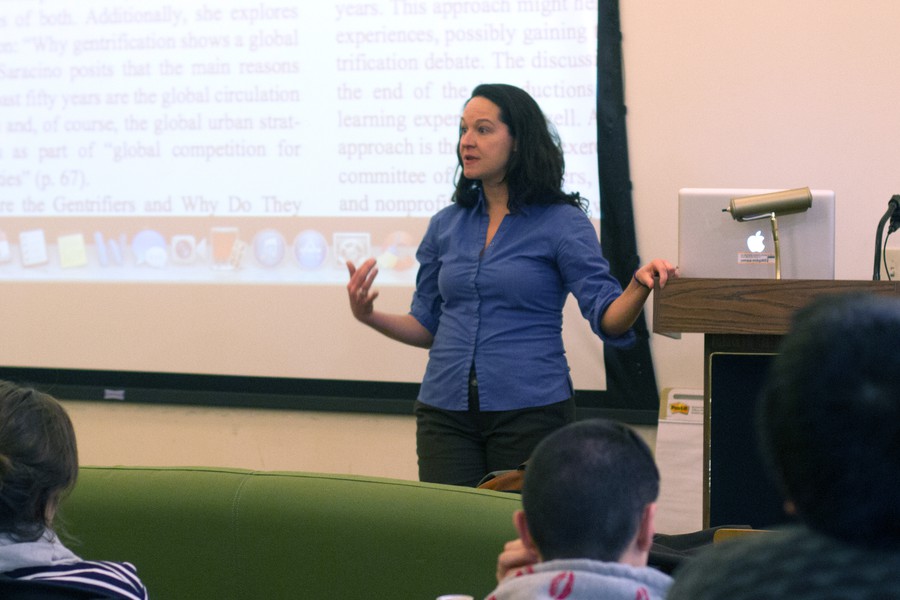 Touching on issues close to home, students discussed the potential and limitations of redevelopment on the South Side in a forum led by Amy Khare at OMSA on Monday night.

Khare, a Ph.D. candidate in the School of Social Service Administration, presented her research on the impact of the recession on mixed-income housing development, focusing on the construction of the 350 new mixed-income apartment units at East 61st Street and South Cottage Grove Avenue, made possible by a $30.5 million federal grant from the U.S. Department of Housing and Urban Development.

“Particularly with the economic recession, there’s the question of, ‘What do we build?’” she said. “I know that the residents who live in Woodlawn have real concerns about the funding that’s coming in to redevelop the five blocks here. How will that money be spent? What jobs will it create? Will it make a difference?”

Khare also reflected on the merits of mixed-income strategies in general, emphasizing that non-profit developers like Heartland Alliance, where she worked before coming to UChicago, do not always share the same values as the private developers with which they often partner.

“It occurred to me that my so-called colleagues who I was partnering with thought about this mixed-income strategy very differently than the way I was defining it,” Khare explained. “They were not thinking about it as a project to ameliorate poverty. They were thinking of it as a way to access land in key areas in Chicago neighborhoods, land they could use to build houses for a very different type of resident than I was thinking of.”

Khare emphasized that there was no singularly held view on the effects of redevelopment, based on her fieldwork.

“I don’t think there’s one voice. People say, ‘If we can get our kids into the charter school then we might be able to not go through another generation of living in public housing…We want our neighborhood to look a little bit like Hyde Park,’” Khare said. “I also hear another message, which is that ‘the University is not a place that I have access to... .’ I don’t want to share my neighborhood with them because the University has historically perpetuated a type of development that has forced residents to move.”

Khare believes that race is usually absent from discussions about urban development, and better alternatives to current mixed-income policies can only come when race is acknowledged.

“This is an income-based policy. Race is silent. You do not see the word ‘race’ on any legislation,” Khare said. “I do think that we will need to return to a race-conscious language and perspective to actually be able to work through integration around income. We need to be able to talk about race in a different way than developers are doing now.”