Krishna Ravella is a fourth-year tennis player from Hinsdale, IL. We chatted with him to get some insider info on the life of a Maroon athlete. 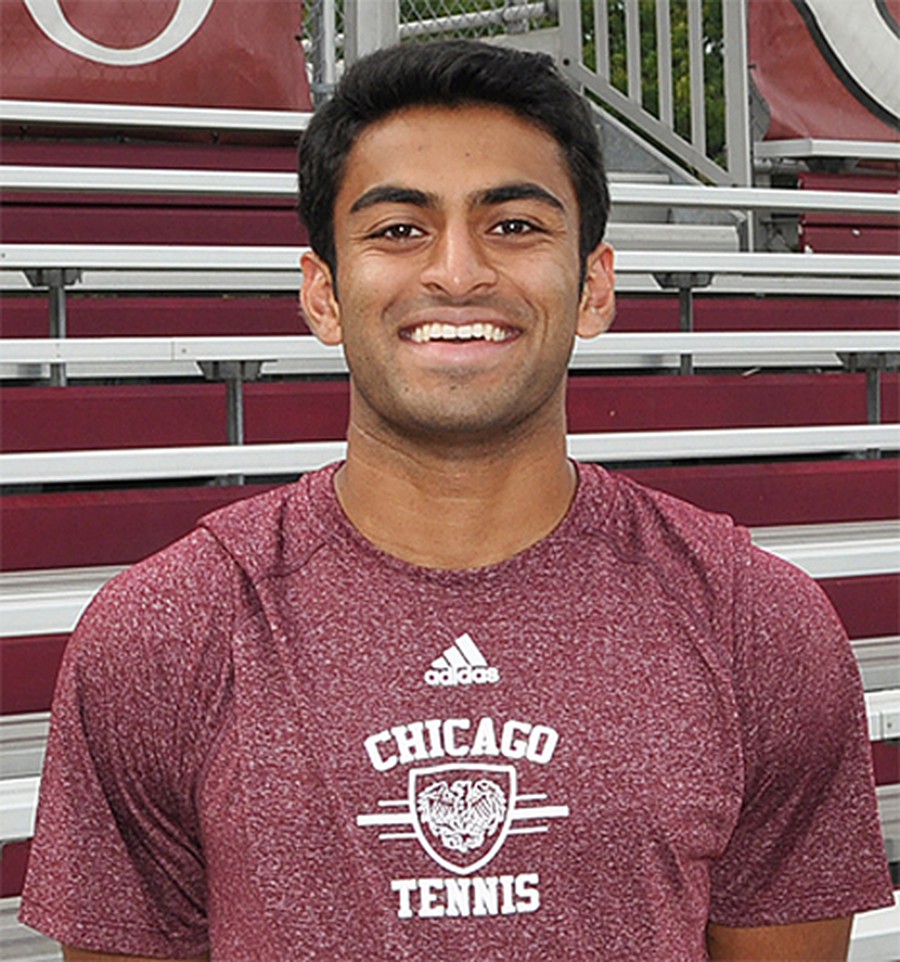 Krishna Ravella: I started playing tennis when I was eight years old. Both of my sisters played tennis growing up, so that’s kind of how I got into it. And I played some other sports growing up, but then I ended up sticking with tennis and continued that through college.

CM: What other sports did you play?

KR: I played soccer, football, and I ran track. I stopped all of those in middle school, and then going into high school, tennis was the only sport that I played.

CM: How did you choose to focus on tennis?

CM: When did you know you’d be able to play in college?

KR: Probably when I was starting high school. I was playing a lot of tournaments around the country, practicing pretty much 20–30 hours a week. I knew that I wanted to use tennis to get into a school that was good academically because I didn’t have any realistic expectations to go pro or anything like that, obviously, but I definitely wanted to come to a school where I could play tennis. That was one of the main factors in my decision.

CM: What’s on your mind when you’re on the court, competing?

KR: You know, it was definitely hard at first not to think about school and classes and all of that, especially being here. But I’ve definitely gotten better at closing everything out when I’m on the court. It’s different being in college, because you’re not just playing for yourself. When you’re growing up, playing tennis tournaments and in high school and around the country, that’s a different field because you’re only playing for yourself. And then eventually coming to college, being around your teammates and coaches, you’re playing for something together. So when I’m on the court, I’m really thinking of helping my team.

CM: You’re a fourth-year, just a few weeks from graduating. Are you going to keep playing tennis when you graduate—competitively, not competitively?

KR: I think I’m definitely going to take a few months off, because I’ve pretty much played it consistently since I was little. I think in the future, I’m going to play recreationally but not super competitively or anything like that, just with friends here and there.

CM: You’re attending medical school at Georgetown in the fall. I’ve heard people make connections between an athlete’s mindset and a doctor’s. Do you see any connection or similarity in the mentality?

KR: I think that above all, tennis has really helped me kind of maintain a balance in my life. And moving forward with my career, I want to be a doctor, obviously, but I think that part of being a doctor is not putting all of your eggs in one basket, and maintaining a balanced lifestyle with family, friends, and doing other extracurricular activities while you’re taking care of patients and people. And tennis has definitely helped me realize that you can focus pretty heavily on more than one thing, because it has been a big part of my life in college. But definitely, tennis has helped me bring that competitive drive to classes and stuff like that as well, because it’s hard to do well in classes here unless you’re motivated and work hard.

KR: I think my favorite would be [Novak] Djokovic. I like his game a lot. He’s smooth on the court, and his personality—he knows how to carry himself well.

CM: So do you have a prediction for the French Open?

KR: I’m going to take him to win the French. I know [Rafael] Nadal is always favored, but I like his chances this year, so I’m going to go with Djokovic.