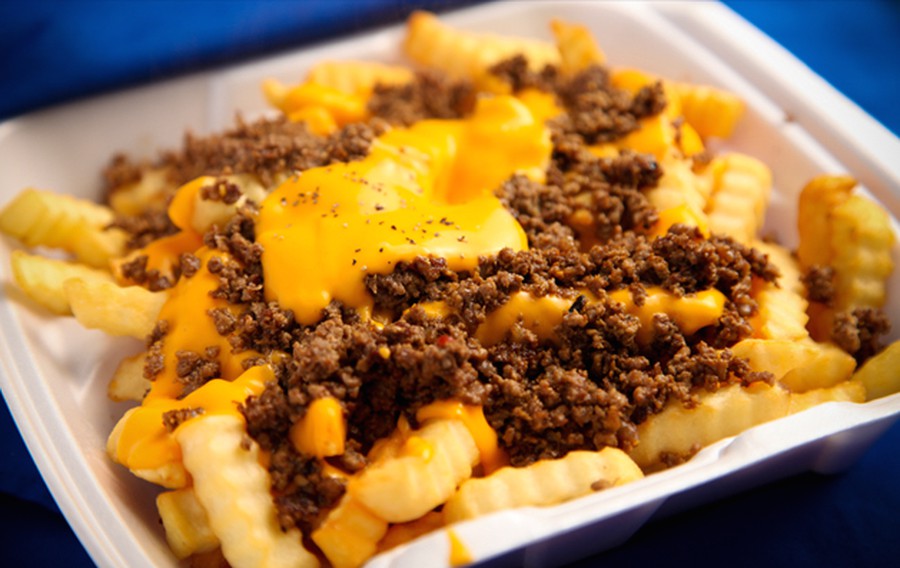 In the interest of ingesting copious amounts of meat, as well as seeing whether Yelp reviews for restaurants in Washington Park are legit, three Maroon affiliates hit up Baba's Famous  Philly Steak and Lemonade (130 East 51st Street) for a Saturday night meal.

No tables, no chairs, and no credit cards. Baba’s might be one of the best joints for you and your posse to hit up if you’re fixing for calories on low salaries. It is located barely a block away from Swagger Lounge, which, according to several reviews, can best be described as “ratchet.” However, Baba’s itself is a clean and friendly establishment that features a plethora of lemonade flavors, all the variations of steak sandwiches possible, and the frugality of Harold’s. Having developed an enriched palate of North Side flavors, I was excited to see what the pride of the South Side had to offer. I, along with Eleanor, opted for a crispy Philly cheesesteak sandwich with giardiniera which arrived atop a wax paper veil, under which were my hot-sauce-lathered fries. The sandwich itself struck an admirable balance between moist and crisp, juicy in all the right ways and generous with cheese. Baba’s, in their infinite wisdom, left the lettuce and tomatoes on the side so you can maximize your grease intake without having to chew through anything remotely organic. Overall, Baba’s is another bulletproof glass-equipped fried-food vendor on the South Side made distinct by its Saran-wrapped lemonades and ability to severely challenge your confidence in your digestion abilities. At the end of the meal my homies were looking like, “Why, God?” when they reminisced over our food.

Seeing as Rohan and I got the exact same exact order down to the piña-colada lemonade, and he’s the Real Arts Reviewer, maybe I should just stick with what I know best. Because damn, I really tried to be critical while eating that deep-fried, crispy philly cheesesteak sandwich. After that first bite I paused and tried to come up with good criticisms or compliments, but my mouth was full of fried stuff, and there was hot sauce dripping onto my pants, and there didn’t seem to be anything to say. After I finished, I sat on the ground and tried to reflect on the experience, but as I crunched on the yellow ice left in my cup, all I could think was that there was a brick in my stomach.

I guess I could say something about simple joys and uncultivated indulgences, but shit, that’s not even close to novel. And to draw that conclusion doesn’t even feel truly honest. I mean, the meal was definitely both uncultivated and an indulgence, but it was the kind of meal where the first bite and sip were the best. As I acclimated to the taste each bite became a little more bland until the last bite was mostly dough and little meat, and I slowly came to the realization that not even hot sauce could save the unremarkable fries from the trash.

Maybe all this means is that while this ideal entry into brick-shaped foods has its flavor elevated by the simplicity of the experience of eating it, as this particular sandwich went on, the experience began to overwhelm the actual flavor. I remembered the heft of it in my hands and the weight of it in my stomach long after I had forgotten the taste of it.

Or maybe that’s not a problem with the sandwich, but with me—after all, my job in this paper is to conceptualize and attribute undue significance to my experiences, so much so that sometimes I forget the fabric of the experiences themselves. Maybe I’m just not built for enjoying a deep fried sandwich sticky with cheese. But I’m definitely built for enjoying that sandwich in a park with four friends and a spring breeze, so if you’ll allow me to rate that experience, not the sandwich, I’d give this a five out of five.

Eating at Baba’s has the same series of outcomes as a trip to White Castle—inner satisfaction with the absurdly low price of your purchase, the inability to eat anything else for the better part of a day, and the total annihilation of the Regenstein B-level bathroom roughly seven hours later.