"I wanted to create a contemporary shape shifter character, another young black woman, and look at how she would move through the world when she figured out that she could change herself to anything from an animal to another person,” Franklin said. 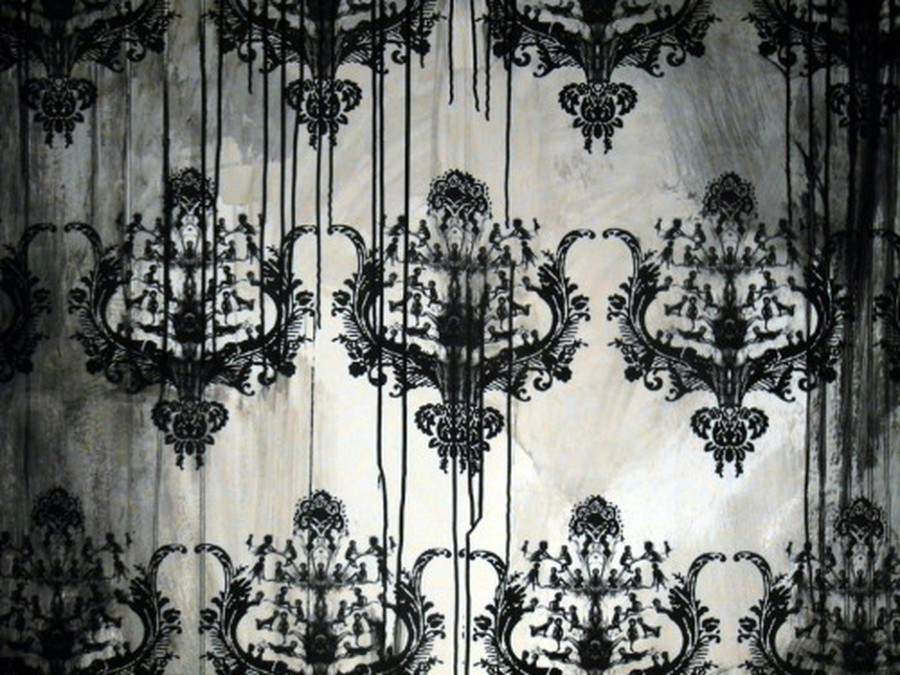 Combining visual art and writing, Like Water, now on view at the Center for the Study of Race, Politics, and Culture (CSRPC), uses a fantastical story of shape shifting to examine themes of identity, power, self-determination, and the malleable nature of memory.

Like Water is a solo exhibition of several works by artist Krista Franklin, who served as the 2013–14 Arts + Public Life/CSRPC Artist-in-Residence. Based in Chicago, Franklin is a writer, a performance artist, as well as a visual artist who often combines a variety of artistic forms in her work.

The exhibition is curated by Dara Epison, the program coordinator for the CSRPC, and is presented by the CSRPC as part of its 20th anniversary programming.

On display across several rooms in the CSRPC, Like Water is centered around the fictional Naima Brown and her family, who have the ability to shape shift.

“I wanted to explore the notion that women, in this case black women, can turn themselves into a lot of different things. It’s a supernatural tale, but on the undercurrent of it is the idea that women do that kind of thing all the time,” Franklin said. “We shape and shift and change over time, from young to old, and sometimes put on different kinds of masks for people. That’s essentially the core idea behind Naima Brown.”

Franklin was inspired to create Naima by Wildseed, a novel by science fiction writer Octavia Butler in which an African shape shifter is abducted and travels to the United States during the time of slavery.

“I wanted to create a contemporary shape shifter character, another young black woman, and look at how she would move through the world when she figured out that she could change herself to anything from an animal to another person,” Franklin said.

“The Two Thousand and Thirteen Narrative(s) of Naima Brown,” a series from 2014 included in the exhibition, features three mixed media works, each accompanied by a paragraph of text displayed in a case beneath them. The first work consists of thick, curly, synthetic hair laid out on handmade paper and almost entirely covered by silver paint. Several strands stick out from the ragged edges of the paper. The second work mixes faded flower petals and dark artificial hair laid out in spirals on top of brown handmade paper, while the third features synthetic hair in twists, formed into circles and loops and spread across brown handmade paper with white beads scattered across the page.

In one accompanying paragraph, Naima pictures the perfect black cat to transform herself into, while another explains that the Brown women carry a gift passed on through generations, “a glitch in the matrix of their complex cellular structures that allowed them to change  whenever they wished, into whatever they wished.” This ability manifests itself differently in different women. “Like in Naima’s case—it was hair, and lots of it,” writes Franklin.

“When I was working with the project, I was working with handmade paper. So I was thinking about the hybridization of the synthetic with the natural,” Franklin said. “I was thinking about synthetic hair as an art material—how could I incorporate it into my work? Symbolically, in the story, Naima Brown sheds her hair with every transformation. And so I used the hair as a touchstone for that transformation.”

On the wall ascending the building’s stairway, three selections from 2014’s “We Wear the Mask” series are displayed. Each work is a collage of cutout images and pictures women in bathing suits with their heads obscured. In “We Wear the Mask II,” sea anemones cover the woman’s head and one of her hands, while a squid hides her feet. Next to the woman, there are many small, cutout eyes.

2014’s “What Big Teeth You Have,” another collage featured, is centered on a woman wearing a bikini bottom with her head covered by a cutout image of a wolf’s head. The image of the woman lies on top of bright lines painted with watercolors, which bleed down towards the bottom of the page, and small, difficult to read pieces of text from newspapers and magazines.

The collages are separate from the narrative of Naima Brown though they are thematically linked to it.

“They have to deal with transformation and shifting, but it’s more about wearing masks,” Franklin said. “There’s this notion around women being dangerous and women being shifty… the idea of women being kind of monstrous.”

Like Water will be on view at the Center for the Study of Race, Politics, and Culture, 5733 South University Avenue, until December 11.