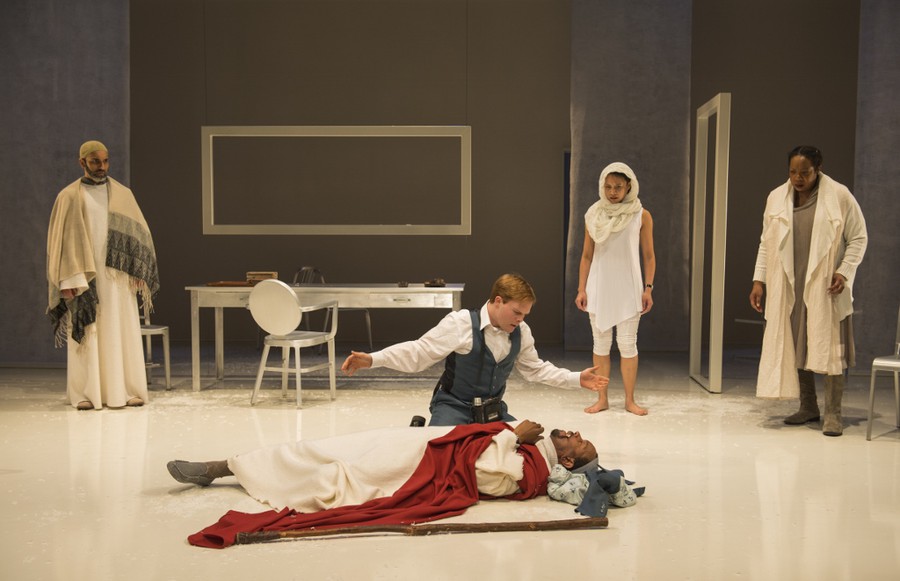 The words of Ecclesiastes 1:9 were sprinkled throughout the first act of The Good Book, which opened at the Court Theatre last Friday. Be it the title of a perpetually-deferred book penned by one of the play’s protagonists, the hollow utterances of a distraught Jewish scribe, or the same protagonist’s existential rants, all of them intoned the weary, age-old lament: “There is nothing new under the sun.”

They are also words that can very neatly write off the play’s premise. When it comes to ontological debates pitting the secular against the spiritual, there indeed seems to be nothing new under the sun, and the same goes for The Good Book. The two main characters are tropes of the highest order: There’s Miriam (Hollis Resnik), a jaded, middle-aged Biblical scholar whose militant atheism too often asserts itself in the lecture hall, and Connor (Alex Weisman), a devoutly Catholic teen coming of age in the mid-1970s who struggles to reconcile his homosexuality with his faith. Though an attractive formula, The Good Book carries with it a whiff of déjà vu.

Yet The Good Book is more than the sum of its parts—much, much more. By interweaving these characters’ stories with a mélange of historical scenes that trace the compilation of the Bible, writers Denis O’Hare and Lisa Peterson—who last teamed up at the Court to present another fresh interpretation of an old text with 2011’s An Iliad—cleverly present the holy text itself as something of a third narrative.

And, as the play is quick to remind us, it’s a narrative that is still very much evolving. Miriam’s Nietzschean assertions withstanding, The Good Book’s thesis is that the word of God is anything but dead: it is still very much a living, breathing text.

That’s not to say that it’s a straightforward one. However, instead of glossing over the inconsistencies plaguing both biblical scholarship and the Scriptures themselves, the play embraces these contradictions, even thrives off them; it approaches a tale as complex and ideologically mired as the Bible’s creation with a blitheness that is refreshingly natural and unforced. The scholarly conclusion that Pentateuchal authorship is not Mosaic, but rather lowercase-M mosaic—the result of multiple authors as opposed to Moses solely—is spotlighted, but blessedly lacks the stiffness of an educational aside.

Miriam and Connor’s dual narrative threads were engrossing, though not without their melodramatic excesses. Miriam’s contempt of organized religion came off as caricaturish, as did Connor’s mannerisms and naïve zest for all things ecclesiastical. Thankfully, smart and sympathetic writing saved these characters from devolving into full-fledged stereotypes. Miriam’s botched attempt to Skype her Syrian husband (ensemble member Kareem Bandealy) was a crowd-pleaser. Connor’s scenes were framed through his obsessive habit of chronicling his life on a tape recorder—yet another clever decision, lending era-appropriate timeliness and introspection to his narrative.

As though to temper what was, at times, a convoluted script, The Good Book’s staging was sleek and minimalistic: Act I was executed on an all-black set, which transformed to all-white for the second act. Supporting roles were played by an impressive ensemble that flexibly cycled through a relentless stream of character and costume changes. For Friday’s performance, a post-show discussion was led by Dean of the Divinity School Margaret Mitchell, providing a soapbox for audience members to critically respond to the play. The conversation which followed was engaged and inquisitive, not unlike the spirit of the show itself. Like any good play, that is what The Good Book is sure to do best: incite hearty dialogue within member of its audience, be they religious, nonreligious, or something in between.

The Good Book continues at the Court Theatre through April 19. Tickets are $15 for students with a valid UCID, $25 for faculty, and $35–65 general admission. Student rush tickets are available for only $5 within an hour of the performance. Visit courttheatre.org for details.