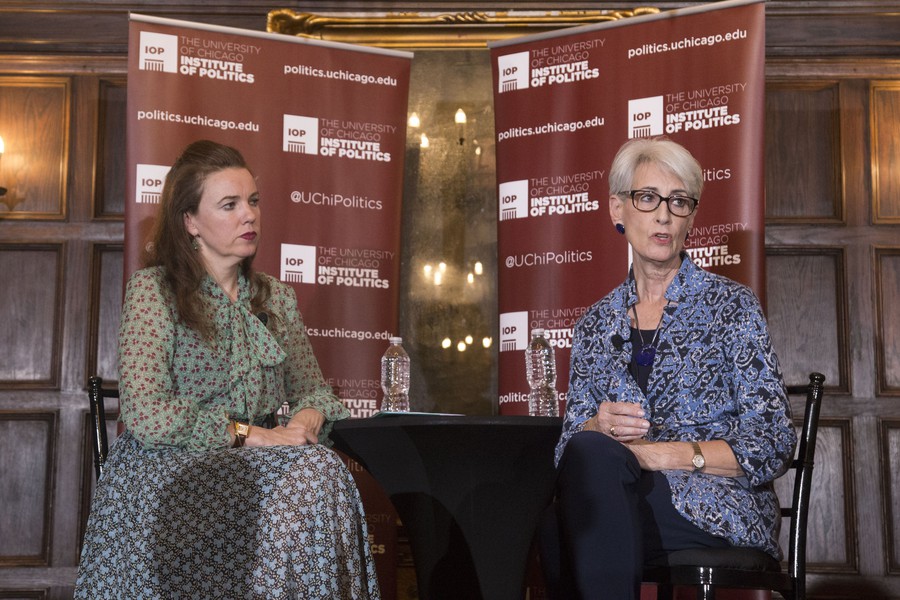 Ambassador Wendy Sherman was at the IOP on Thursday, October 6.

The U.S. diplomat who led negotiations leading up to the Iran nuclear deal gave a talk at the Institute of Politics (IOP) on Wednesday.

Ambassador Wendy Sherman’s talk, which she called “a tour of complicated times,” focused on the foreign policy challenges that the next U.S. president might face. Sherman gave a broad overview of some of the most salient challenges faced in several areas of U.S. geopolitical interest, touching on the role of the U.S. military in the world and national security.

Sherman said the Iran nuclear deal, which she called “the best solution out of really bad choices,” limited the access of the Iranian government to nuclear materials in a verifiable way.

“I don’t trust Iran, they don’t trust me,” she said. The deal includes provisions so that the U.S. and its allies can be sure that there is no nuclear development in Iran. She quoted former Secretary of State Hillary Clinton, saying the plan is one that aims to “distrust and verify.”

The talk began with a discussion of current populism in the U.S. and the U.K., particularly its effects on the Brexit referendum and Donald Trump’s candidacy. Sherman said she understood the concerns of people who feel like they have been “left behind” by globalization.

“Globalization and trade create a lot of winners, but it also creates some losers, with all due respect to all the 55-year-old white guys in the audience,” Sherman said.

The talk then shifted to the country’s relationship with Russia, which Sherman believes is “complicated.” She touched on the role of Russian President Vladimir Putin, saying that “he doesn’t necessarily play by the rules that the rest of us play by.”

She believes there is some reason to be skeptical of any potential future cyber-attacks from Russia on American political institutions, worrying that Russia is doing what they’ve done in Europe, which is release authentic hacked documents before releasing more that won’t necessarily be legitimate.

Sherman has experience dealing with North Korea, which she also delved into during the hour-long talk. She stressed the very real dangers that could come from the North Korean nuclear program.

“They have developed more sophisticated military technology, which in the not too-too distant future, will probably result in a ballistic missile capable of carrying a nuclear weapon to the continental United States. At that point North Korea will believe that they have deterred the United States…and therefore deterred the world,” Sherman said.

She also mentioned the importance of cooperation with China when dealing with North Korea.

When the moderator of the discussion brought up Syria, Sherman’s tone turned more somber. “Nothing that I did in government…was as heartbreaking as the conversations around Syria,” Sherman said. She stressed how difficult it has been to create an effective plan of action in the country.

“It was very hard for any of us to tell the president with confidence: if we did this, this, and this, what would happen? What would be the next five things that will occur?” Sherman said.

Tucked away in her response to an audience question dealing with the future of Iran-U.S. relations, Sherman expressed a glimmer of hope, paraphrasing the first female secretary of state, Madeleine Albright: “I tend to be an optimist, by nature. Madeleine Albright…always says she’s an optimist that worries a lot. I think that’s a great description.”

An earlier version of this article included a photo from the wrong IOP event.

“I am only given twenty-minutes to explain what Argentina is. It’s very difficult but I will try my best."