No. 11 Chicago Thrives at Home 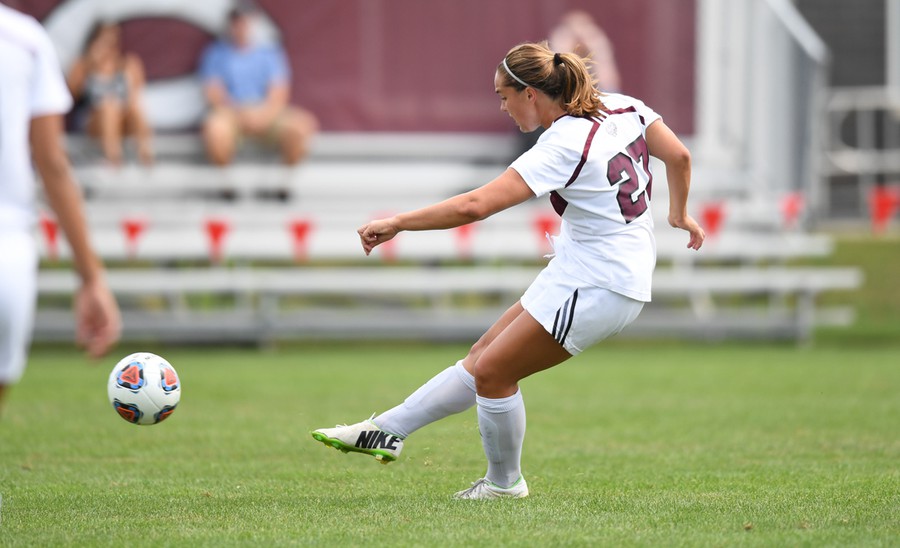 Third-year forward Mia Calamari takes her boot to the ball.

The South Siders, ranked No. 11 nationally at the season’s end, had a fantastic playoff weekend, sweeping both Augsburg College and Webster College at home. The wins improve the Maroons to 11–0 at Stagg Field. The final scores were 6–0 against Webster on Saturday, and 2–0 against Augsburg on Sunday.

The Maroons had an even scoring attack during the game against Webster, notching three goals during both halves of the game. This game was a rematch of 2014’s first round, where Chicago won 1–0. It didn’t take long for the team to strike, with third-year Mia Calamari knocking one in off the right post in the 18th minute, with classmate Caroline Olivero assisting. First-years Hanna Watkins and Rachel Dias also scored in the first half, pouring goals in during the 24th and 40th minutes, respectively. Dias’s goal was particularly impressive, as she scored while striking the ball blindly with her back heel.

The second half was just as efficient as the first, with fourth-year Anase Asom scoring her first goal of the season during the 64th minute of the game. Calamari then struck again for her second goal of the game, and eighth goal this season, at 68 minutes in. Right before the end of the game, first-year Adrianna Vera scored, assisted by fourth-year Sophia Kim and second-year Dana Urlich. For the game, Chicago dominated shots, leading 28–6, and won the corner kicks game 3–1. Not surprisingly, Webster led in fouls, with four to Chicago’s eight, and saves, protecting eleven times as opposed to Chicago’s two, indicating that the Maroons were attacking ferociously and often.

The game against Augsburg was less even in terms of scoring, as the Maroons’ only offense came during the first half. Much like last game, first-year Adrianna Vera scored, with a header during the 27th minute, while third-year Caroline Olivero provided the other goal 43 minutes and 19 seconds into the match. Chicago once again won the battles of shots and corner kicks, leading 15–9 and 9–4 in those statistics, respectively. Interestingly enough, Chicago actually lost saves, 4–3, but still managed to pull out the shutout. As for fouls, the Maroons were perhaps more overly aggressive than usual, losing 9–7.

Despite Augsburg having one more win under their belt for the season, this did not deter the Maroons, who improved to 17–3 with the win. This win brings Chicago to the Round of 16, with just four wins separating the team from gold and glory. First-year Clare Suter, who assisted Vera on her goal during the Augsburg game, remarked on the efforts of the defense this weekend, which was particularly spectacular.

“A shutout didn’t mean that much because they weren’t that threatening, however, we expect to face much more challenging teams in the Sweet Sixteen and forward,” Suter said. “But shout out to the offense for scoring and Katie Donovan for the amazing saves.”

The next game for the Maroons is next Saturday, November 19, against No. 3 Thomas More. The game is at Stagg Field and the time has not yet been announced.