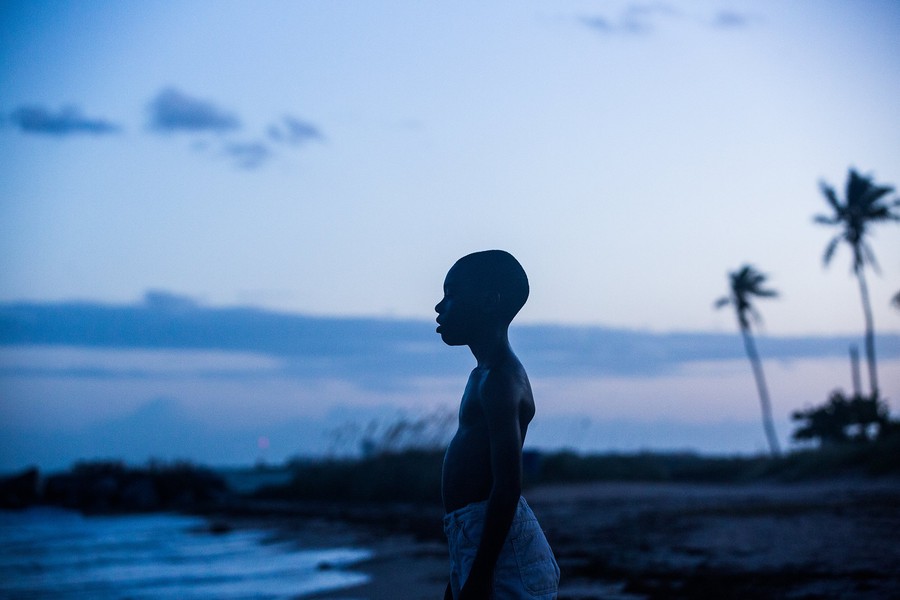 A still from "Moonlight," directed by Barry Jenkins and based on a play by Tarell Alvin McCraney.

Barry Jenkins is an American filmmaker who rose to prominence for Medicine for Melancholy (2008), which was nominated for three Independent Spirit Awards. He is the writer and director of Moonlight.

Tarell McCraney is an American playwright and actor who is best known for writing the Brother/Sister Plays trilogy. He is a recipient of the MacArthur Fellowship Grant in 2013 and the Windham-Campbell Literature Prize in 2013. He wrote the script for the play In Moonlight Black Boys Look Blue, which was adapted into the story for Moonlight.

“What it says about black masculinity, I don’t know necessarily,” began playwright Tarell McCraney at a roundtable discussion on his play In Moonlight Black Boys Look Blue. “I wish I had some sort of language for it. What I do know is that I’m watching a kid try and perform the masculinity that he saw in his life—poorly, to the point that he’s not living it, he’s not inhabiting it. He’s performing it in a way that’s cutting off his sensitivity to other things, including his sexuality.”

It was a tricky question for McCraney to answer. Director Barry Jenkins had immediately passed it over to him—and rightly so. Of the two men in the room—frankly, of everyone involved in film—McCraney would seem best able to answer this question.

McCraney’s past work, which has garnered him such accolades as an Olivier Award nomination and a MacArthur Fellowship grant, deals with themes of identity. In particular, those closest to him: race, sexuality, masculinity, family. In Moonlight Black Boys Look Blue was based on his own persona.

"It was an investigation of my life up until a certain point,” McCraney said. “I was at a crossroads: I had just graduated from DePaul; I was still living in Chicago; and I was about to go off either to grad school or to pursue my professional career as an actor. I had been writing plays, but I wanted to try to figure out, in a poetic way, if I had made a turn here, what my life would have been like.”

McCraney cited some challenges to his personal exploration, the most immediate being his mother’s passing. “The person who could have answered questions about me as a child was gone,” he confessed. This reality made his personal artistic project more demanding—and more necessary—than ever.

“I was trying to put a narrative together and I thought, ‘Okay, so if I had taken a turn left at this point, what would my life look like?’ And that’s where Chiron [the central character] in the original script came from. It wasn’t a huge departure; it was a minuscule left turn.”

In Moonlight Black Boys Look Blue never made it to the stage. Fortunately, the script landed in the talented, enthusiastic hands of filmmaker Barry Jenkins. At the time, Jenkins enjoyed the indie spotlight. His 2008 romantic drama, Medicine for Melancholy, garnered critical acclaim on a budget of $15,000. Now McCraney’s deeply personal story has come to fruition in what critics and industry leaders proclaim to be the year’s best film.

"What does the film say about black masculinity?” I had posed that question to Jenkins and McCraney: I felt most compelled to explore the answer after watching Moonlight. A character study in three acts—each a different period in Chiron’s life played by an age-appropriate actor—Moonlight tackles the presence and performance of black masculinity. In the third act, we are presented with an adult lead (Trevante Rhodes) whose impressive physical build and street cred epitomize the perceived masculinity that both plagued and eluded him in his youth. Going by the nickname “Black” on the streets, this reification of Chiron also seems to suffer from an uncultivated sexual identity that has been overwhelmed, almost to the point of repression, by his pursuit of masculinity. What do we make of the relationship between Chiron’s black masculinity and queerness, two facets of identity that appear at variance with each other?

McCraney discussed the adult Chiron with an unfaltering sense of familiarity. Interesting—Jenkins conceived this character in full, as an extension of McCraney’s original script. “For the third story, neither one of us is that character,” Jenkins elaborated. “That character is a continuation of what comes in the first and second story, but [he’s] also this idea of what could have happened…”

Jenkins further expanded on his friendship with McCraney, which was already apparent given how the two men practically finished each other’s sentences. “One of the really beautiful things that happened over the process of this was that I realized that, even listening to [Tarell] now, our lives are just so fucking similar, that it was really easy for me to feel like Chiron is Tarell’s, but in this way, he’s also mine.” Both grew up in Miami and attended the same high school, with no knowledge of each other—it was truly remarkable how similar their lives were.

McCraney spoke with merited confidence on behalf of adult Chiron and his identity conflict: “I don’t think he’s [neglecting his sexuality] in an active form of repression; I think what’s happening is, he’s going, ‘I have to survive this world. The only thing I know about survival is that [my role model Juan (Mahershala Ali)], whom I love and adore, survived. I will now put that on and perform it the best I can.’”

McCraney wished he had some sort of language to properly express his character assessment—that language exists, and it is cinema. With spectacular camerawork, discerning formalism, and a vibrant Miami backdrop, Jenkins has composed an epic visual tapestry of gestures, relationships, confrontations, and memories. It hits all the right notes, from opening shot through to the mesmerizing and monumentally cathartic final scene. Complete with a careful attention to bodies, sounds, colors, and lingering gazes, Moonlight evoked the long-lasting influences of such auteurs as Jean-Luc Godard and Claire Denis: The film is just as much a feat of pure artistic prowess as a watershed moment for black, queer, and intersectional cinema. My words can’t even try to do it justice. You really ought to go see it for yourself while it’s in theaters. And if you’re anything like me, bring a pack of Kleenex, just to be safe.

"Olli Mäki" at Chi Film Fest: The camerawork has a documentary quality to it.