A student played a mournful national anthem on his trumpet. 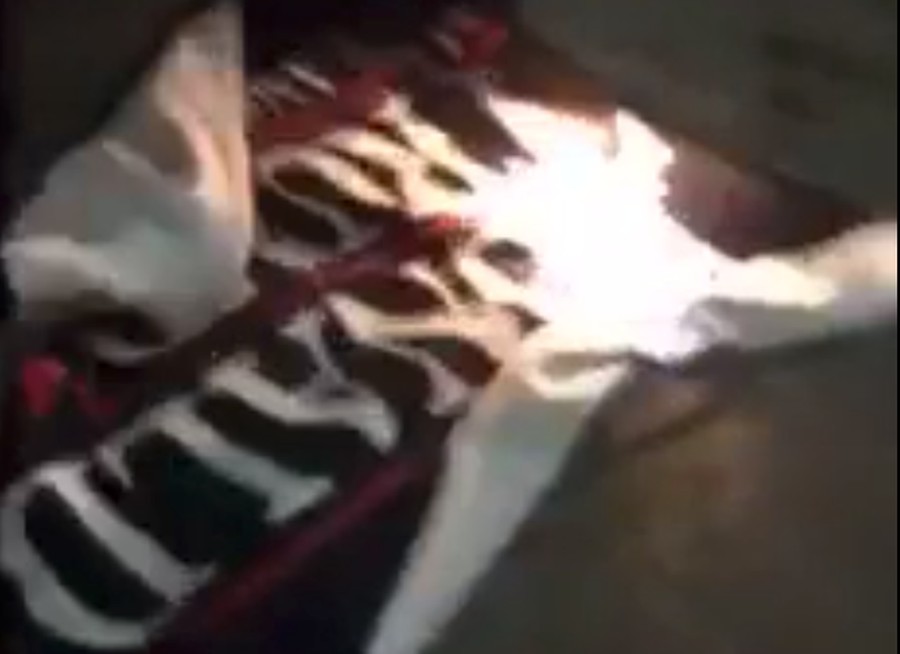 Students burned Trump paraphernalia on the quad around midnight on election night.

As election results rolled in last night and key states were called for now president-elect Donald Trump, nearly 300 students congregated on the quad for a “primal scream” that evolved into an anti-trump demonstration.

Around midnight several students lit a Trump banner on fire at the cheers and encouragement of the crowd, and chants of “fuck trump” returned in choruses. On the fringes a student played a mournful national anthem on his trumpet.

Another wave of students arrived just after, carrying a large speaker. They played rapper YG’s song “Fuck Donald Trump” on repeat and students sang along with the protest anthem.

Fourth–year Andrew Xue said he did not think the location of the Trump paraphernalia burning was ideal, but he said, “I guess it certainly got the message across.”

At around 9:30 p.m., First-year Victoria Constant organized the event with a post in the Class of 2020 Facebook page, writing, “If Trump wins, primal scream in the center of the quad at midnight.” She later made a Facebook event, which clarified, “This is happening no matter who wins.”

“That [event] was the greatest display of collective effervescence I’ve ever seen. It was so loud,” Xue said.

Students marched to the center of the main quadrangle, screaming and yelling along the way and with new fury when they reached the gathering.

At 12:15 a.m. the crowd screamed again, in a more unified effort that lasted almost a minute.

UCPD did not report to the scene, though a security guard kept watch over the gathering.

“Trump 2020” was scribbled in chalk at several places on the quad last night. By Wednesday, the pro-Trump messages had been crossed out or written over.

Students at many schools in the country demonstrated against Donald Trump last night. The Yale Daily News reported that Yale students also organized a “primal scream.”

Trump Win Shocks U of C Students; His Scattering of Supporters on Campus Celebrates

We asked students for Trump, Clinton interns, and the student president about Trump's victory.