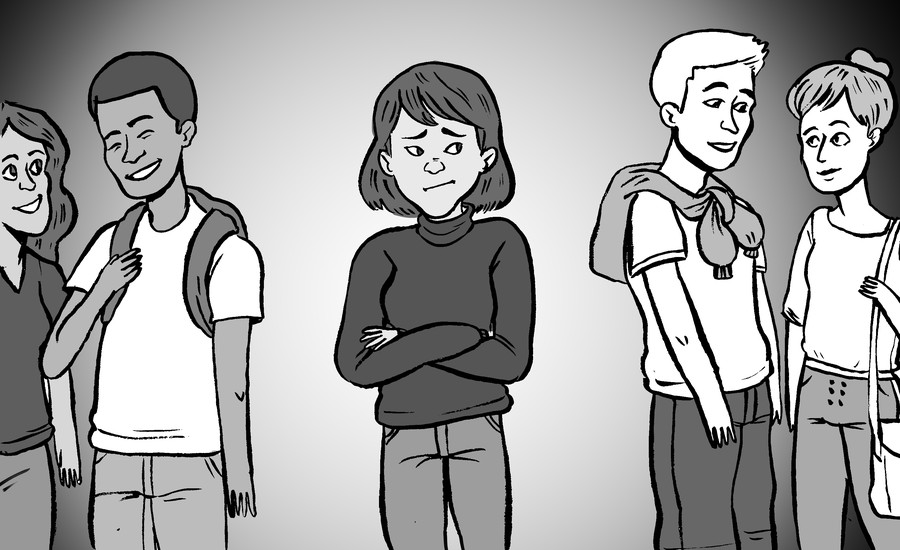 I scroll through my phone and read the words, “The Diversity Forum provides undergraduate Black, African American, Hispanic, Latino, Alaskan Native and American Indian freshman and sophomore students the opportunity to participate in a one and a half day immersion experience to kick start your career in financial services.”

Below is their slogan, “Life’s better when we’re connected.”

Chances are if you’ve looked at other diversity forums, you’ve noticed (or not) that Asian Americans have been excluded.

As someone who is perceived as smart and industrious simply because I’m Asian, shouldn’t I be grateful that out of all the possible stereotypes, I’ve been given the model one? I should feel indebted to the society that decided I’m not the problem but a solution. I have nothing to complain about. But the issue is not what these characteristics are, but that an entire ethnicity is viewed through a lens of homogeneity. The issue is that when a forum’s aim is to promote diversity, Asian Americans, who make up 5.6 percent of the U.S. population, are not considered a minority. The issue is that we are neither excluded nor included. We are invisible.

In taking Asian Americans out of the equation, these companies are implicitly assuming that they are comparable to the white, American population. They elevate the position of the Asian American to that of a model, with publications throwing out titles like “Those Asian-American Whiz Kids,” “Success Story of One Minority Group in U.S.,” and most worryingly, Newsweek’s “Success Story: Outwhiting the Whites.” They glorify statistics of Asian-American families experiencing an increase in median wealth from $68,636 to $74,343 and growth in educational attainment, with 29.3 percent of Asian Americans holding a bachelor’s degree, compared to 28 percent of the general population. People seem to think that Asian Americans don’t need to be included in diversity forums because they are statistically successful. They are overrepresented.

Yet when only eight out of 500 Fortune 500 CEOs are Asian Americans, what does overrepresentation mean? That for every 436 white CEOs, there can be at most 8 Asian Americans? In a University of Michigan study, research shows that for residential neighborhoods, African Americans considered “integrated” to mean a 50/50 mix of white and black, but a majority of whites considered this ratio too high for their comfort. There is a disconnect between how we think of diversity and how diversity actually functions in society. That overrepresentation is used to justify the exclusion of Asian Americans suggests that diversity represents a quota, a box to be checked—and apparently the box for Asian Americans has already been checked off.

This perception is dangerous because statistics do not indicate racial equality. By substantiating the Asian-American success story with average family median incomes and education, the media has confidently asserted that Asian Americans have “outwhited the whites,” as if first, the default definition of success is the white American, and second, Asian Americans have seamlessly integrated into this brand of success (and by extension, the country). Material success is not a measuring stick for acceptance—if it is, explain to me why in the Silicon Valley corporate ladder, only 27 percent of professionals, 19 percent of managers, and 14 percent of executives are Asian American. Explain to me why in law firms, only 5.3 percent of partners are Asian American. Explain to me why, when resumes are screened, qualified candidates are tossed out because their names are Asian and not “American.” Fewer than 10 of America’s 3,000 colleges have Asian-American presidents, and only 2.4 percent of the 113th Congress is Asian American. We are not overrepresented, but underrepresented where it most matters: in positions of institutional and political power.

We are stuck beneath a bamboo ceiling.

Under this ceiling, we are put into a position where we experience neither the blatant inequality of other minorities nor true equality with whites. Asian Americans can’t be compared to our peer minorities, because as Newsweek’s “Success Story: Outwhiting the Whites” has so eloquently put it, we’ve surpassed equality! But look at the imbalance in positions of power, and you’ll hit your head against the bamboo. What is perceived materially as acceptance is external; instead, the Asian American holds the awkward, uncomfortable position of the overlooked middleman, one who is always swimming in the lower to middle echelons, but can never swim either deep enough or far enough to gain entry into the upper echelons.

Scrolling through my phone, I once again come across the slogan, “Life’s better when we’re connected.” These companies are well-intentioned and these forums are not wrong. Progress has been made for Asian Americans and other minorities alike. But in striving for a multicultural, textured world, the box for diversity has not been checked off—to truly realize this goal, there must be no box.

Jasmine Wu is a first-year in the College majoring in philosophy and economics.