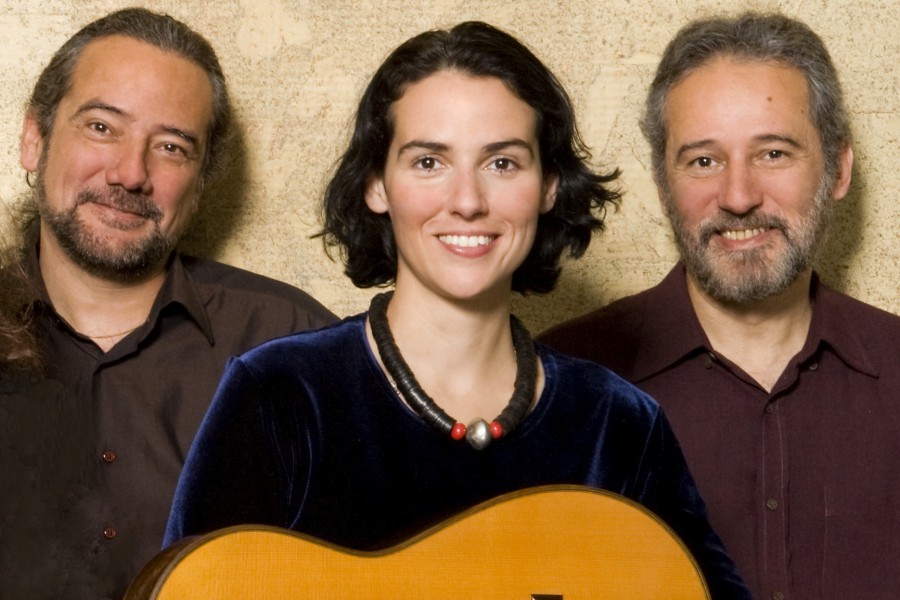 Courtesy of University of Chicago Presents

Drawing on traditions as disparate as the baião rhythm of northeastern Brazil and the Arabesque flair of the Lebanese diaspora, Sérgio, Odair, and Clarice Assad reaffirmed their status as members of Brazil’s most musically innovative family by playing compositions spanning from Rio to Catalonia in Mandel Hall Sunday afternoon.

Although Sérgio Assad maintains close ties to the University of Chicago—his wife, Angela Olinto, chairs the Department of Astronomy and Astrophysics—he and his brother Odair typically perform in Evanston. On Sunday, however, Sérgio and Odair, who were joined by Sérgio’s daughter Clarice near the end of their show, had no trouble adjusting to their new environs. The acoustics of Mandel provided a worthy setting for the crisp dexterity that characterizes their style of classical guitar playing.

The brothers began on stage with their respective guitars, playing renditions of two pieces from Isaac Albéniz’s suite Iberia. The arrangement drew on elements from the suite’s origin—a technically challenging piano composition—incorporating elements of the two-guitar arrangement introduced by Brazilian classical guitarist and composer Sergio Abreu in the 1970s. Swift and percussive, the Assad brothers alternated seamlessly between curt chord sequences and trembling melodies.

After excursions into Debussy, among other composers, Sérgio and Odair presented the fusion of Chopin’s Prelude No. 4 in E minor (Op. 28) with Insensatez, a 1960s bossa nova standard written by Brazilian legend Antônio Carlos Jobim. More than any other played on Sunday, this piece showcased the genius of the Assad brothers, who combined a classic Brazilian composition—based loosely on a chord progression by Chopin—with its imitation, Insensatez, to create a piece that honors old and new masters alike.

The performance also provided the audience with its first taste of Clarice Assad’s vocal talent. Her versatile voice adeptly handled Jobim’s melancholy lines—no small feat, considering that her accompaniment consisted of only two guitars, as opposed to the sweeping orchestral instrumentation that accompanied the original recording.

The three Assads continued their program with three more works from the Brazilian musical canon. Baião de Cinco, based on a rhythmic corruption of Pernambuco’s signature musical beat, featured Clarice and Odair trading vocal and guitar lead lines over the staccato shuffle of Sérgio’s rhythm guitar. Next, Sérgio and Odair temporarily left the stage and Clarice took to the piano to perform two suites of songs by two of Brazil’s most celebrated composers, Jobim and the Minas Gerais–born Milton Nascimento. The suite of Nascimento songs, including “Cravo E Canela” and “Ponta de Areia,” drew heavily from his mid-1970s repertoire.

The highlight of Assad’s Jobim medley was her take on “Waters of March,” in which Jobim’s Portuguese lyrics were accompanied by Assad’s blocky piano arrangement.

The Assads concluded their concert with a performance of Clarice and Sérgio’s suite Back to Our Roots. Although the suite, somewhat drawn-out and lacking the crispness of the rest of the program, was perhaps a poor choice for the finale, it did feature delightful contributions from Sérgio on the sazouky, which is a hybrid of the Greek bouzouki and the Turkish saz. Clarice referred to her father’s sazouky as a “peaceful instrument,” representing harmony between the often-fractious Greek and Turkish peoples.

The adjective “peaceful” could be easily applied to the entire concert; the Assads’ musical and interpretive abilities indeed blended serenely, allowing for the music of Nascimento and Jobim, the celebratory shuffle of the baião, and classical Impressionism to share the stage.