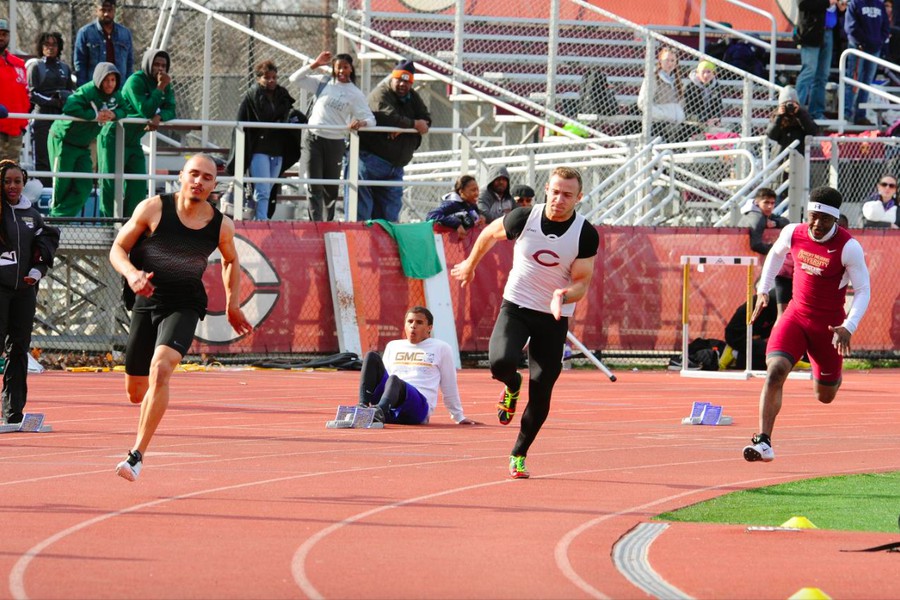 When the Maroons traveled to Valparaiso University in Indiana for the Crusader Open on Saturday, they were not greeted with the sunny skies and warm weather they had desired. Rather, the downpour was of Biblical proportions, befitting the story of Noah more than any else. Nevertheless, the fearless Chicago squad set forth to the track in Valparaiso and fought through the rain and wind. Despite not sending the full squad, the Maroon men and women were able to take third and fourth place, respectively.

The women’s trip was highlighted by second-year Megan Verner-Crist’s brilliant 1500-meter run. She finished the race in a blistering 4:35.43, putting her in 26th position nationally. Not far behind the victor was fellow second-year Cassidy McPherson, who posted 4:50.39 on her way to the third place. The only other Maroon podium finish came from another second-year, Vivian Barclay. Her long jump of 5.15 meters garnered her third place in the event.

The remainder of the Maroons’ 66 points came from a slew of finishes just shy of the podium. Fourth-year Maya Lewinsohn took fourth in the 5K in just one second over 19 minutes, and first-year Anastasia Bernat took the same position in the 400-meter hurdles. Likewise, first-year Grace Penders took fourth in the triple jump with a 10.34-meter hop, skip, and jump. Rounding out the slew of fourth-place finishes was Olivia Cattau. The second-year took that placement in both the high jump (1.30m) and the javelin throw (30.60m). Cattau wasn’t done there, and she went on to take fifth place in the 100-meter hurdles. The other scorers for the Maroon women were second-year Angel Fluet (fifth in the pole vault), first-year Merisa Middlestadt (fifth place in the discus), and fourth-year Theo Kassebaum (seventh place in the 100-meter hurdles).

Fourth-year runner Alisha Ho summarized the meet: “I’m very proud of all my teammates,” she said. “With the rain and wind there were some very tough conditions out there, and a lot of our runners performed really well. We are excited to take these finishes and improve upon them in our meet two weeks from now at North Central.”

On the men’s side, the South Siders managed to top the women’s score for the first time in this outdoor and field track season. Three Maroons—fourth-years Michael Bennett and Ryan Manzuk and second-year Cristen Bublitz—took first in the pole vault, 400-meter hurdles, and javelin, respectively. The results from Bennett shouldn’t be surprising, as the fourth-year’s terrific career includes a National Championship, and three UAA Champion honors.

But Bennett remains focused on the team’s success. “I feel like the team showed great resilience this weekend running in the rain,” he said. “The higher finish, even against some DI competition, shows our mental toughness at this point in the season.”

The squad was able to round out its performance with several other trips to the podium. Second-year Peter Kreuch came in second on the 5,000-meter, while classmate Jacob Amiri took third in the 1,500-meter to round out the long distance scores. Second-year Connor Turkatte contributed a third-place finish in the 100-meter with a time of 11.32 seconds, as well as three points to the team score for his sixth-place finish in the 200-meter dash. Finally, the UAA Outdoor Men’s Most Outstanding Field Performer, third-year Andrew Maneval, was able to continue his success, finishing third in the discus and fifth in the shot put.

With the Valparaiso Crusader Open wrapped up, the Maroons will have this weekend off before they compete again in two weeks at the North Central College Dr. Keeler Invite, their second to last meet before the NCAA Division III Outdoor Championships that will be held later this month. The Maroons are the team to watch, as the women look to continue their dominant performances and the men start to hit their stride.