“We’ll be focused on Washington Park just as much as we are on Woodlawn and the Jackson Park area.”

By Jaehoon Ahn   and Pete Grieve 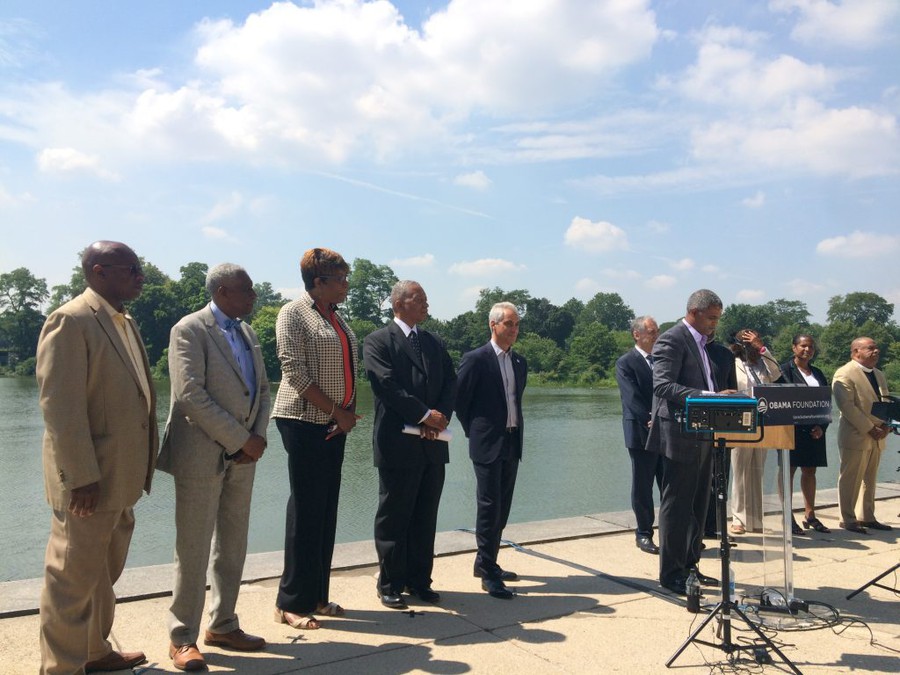 Obama Foundation Chair Martin Nesbitt discussed plans for the center at a press conference on August 4, 2016 in front of the Jackson Park Lagoon.

On Wednesday, planners of the Obama Presidential Center held a press conference in front of the Jackson Park Lagoon at the Museum of Science and Industry to discuss the 2021 opening of the presidential library in Jackson Park.

Representatives of the Obama Foundation, the City of Chicago, and the University of Chicago, along with community leaders and local aldermen tried to assuage residents’ concerns by emphasizing plans to spur development in Washington Park—the home of the other site that made the final round of consideration for the library.

“Our support for the efforts in both neighborhoods for growth and engagement will not be limited to one side of the South parks,” Chair of the Obama Foundation Martin Nesbitt said. “We’ll be focused on Washington Park just as much as we are on Woodlawn and the Jackson Park area.”

Nesbitt said that economic development and community engagement will begin in both neighborhoods well before the Center opens its doors.

On June 30, the Foundation announced that Tod Williams Billie Tsien Architects will design the Center, and Nesbitt said that the design team is hard at work “putting together the right players to pull this off.” He added, “We think it’s going to take us 12, 18 months of thinking through design, and then a period of time to construct the building obviously, but sometime in 2021 we should open our doors.”

Officials cited the park’s rich history and its lakefront scenery as they explained why the President and First Lady chose Jackson Park over Washington Park.

“Jackson Park with its aesthetics, its iconic location, the historical relevance of the World Fair—we just think it will attract visitors on a national level, a global level,” said Nesbitt, who also noted that this will be the first presidential center in an urban area. “We think that locating the Center here is probably the best way to benefit the larger South Side together.”

Mayor Rahm Emanuel echoed Nesbitt’s excitement for the development and tourism that the Center will bring.

“With this investment, we’ll be bringing more world leaders and guests from around the world and around the United States to the City of Chicago and specifically to the South Side,” Emanuel said.

Addressing concerns that have been raised by South Side residents, officials at the press conference repeatedly cited efforts to bring comprehensive economic development to the broader South Side communities.

On July 27, Washington Park residents convened for a town hall meeting and expressed concerns regarding possible displacement of longtime residents and toward economic development that some feared could exclude local residents and businesses. The event, which was organized by Southside Together Organizing for Power to draft a Community Benefits Agreement, was attended by more than 150 residents.

“We are going to make sure there is made public investment in both the parks, in the transportation, and in other amenities so that the impact of the center of gravity or the centrifugal force will then be a catalyst for other economic development,” Emanuel said.

3rd Ward Alderman Pat Dowell said that Washington Park will “ride the wave of opportunity” presented by the opening of the Center just miles away in Jackson Park.

“We look forward to the spin-off benefits of economic development, improved schools, better infrastructure, working with the Obama Library Foundation, the people of Washington Park, and the University of Chicago,” Dowell said.

Nesbitt and Emanuel said that they hope the proximity of the site to the Museum of Science and Industry, the Dusable Museum, and the University of Chicago will encourage visitors to explore the South Side beyond the Center.

“When you look at the University of Chicago plus the museum campus, we are now uniquely positioned with the library to make an impact on the South Side for all parts of the South Side to receive the educational, and cultural, and economic benefits,” Emanuel said. He added that University President Robert Zimmer has been a partner to the City and the Foundation’s efforts to make that impact.

“The Obama Presidential Center here in Jackson Park will provide an array of new opportunities for young people,” Zimmer said at the press conference. “It’ll be a catalyst for economic development, cultural enrichment, and community programming.”

Emanuel also expressed relief about Friends of Parks’ recently announced decision not to file a lawsuit to try to stop the presidential library from coming to Jackson Park. Because the Jackson Park site is not public trust land, Friends of the Parks concluded that they had no legal basis to block development on the land.

“I'm glad that they are not going to sue… because this is an opportunity that you don't want to be tangled up in courts,” Emanuel said.

Several religious community leaders expressed their support for the project and thanked the President and First Lady for building the Center on the South Side.

At the press conference, Dr. Byron Brazier, a Pastor at the Apostolic Church of God in Woodlawn, said that the center will “strengthen not just the physical landscape, but also the human condition.” Reverend T.L. Barrett of the Life Center Church in Washington Park called it, “the most historic and important announcement that I believe our city has ever had.”