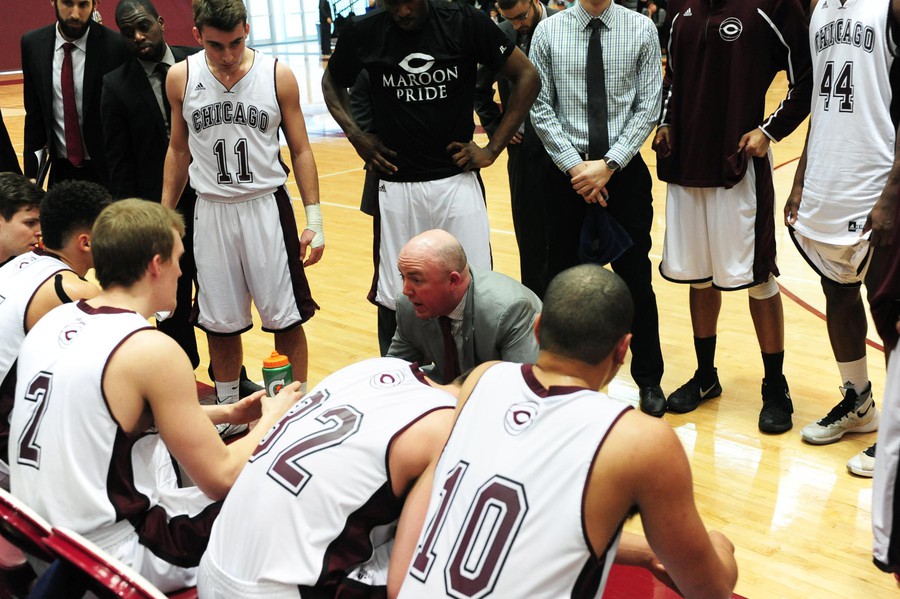 The Maroon men get a pep talk during a timeout.

After a successful weekend at home, the Maroons picked up their first two conference wins and improved to hold a record of 2–3 in the UAA and 10–6 overall. Last Friday night the Maroons reigned victorious as they came out ahead after a tough battle with the Brandeis Judges.

With fourth-years Blaine Crawford and Tyler Howard, as well as third-year Jake Fenlon posting 16 points each, and fourth-year Waller Perez scoring 14 of his own, it was easy to see the great offensive team effort that was shared in the match against Brandeis. Bolstered by this collective Maroon effort, the team battled with the Judges the whole game but pulled ahead just in time to snatch the win, with a final score of 75–65.

The following Sunday, the South Siders picked up another win. They came out strong, nabbing a 93–79 victory against the NYU Bobcats, with another great offensive effort by Perez, who scored a whopping 24 points, while third-year Collin Barthel and Crawford closely followed with 18 and 17 points respectively. Fenlon also contributed with 15 points.

This weekend the Maroons are back on the road and ready for another UAA doubleheader. Their first match will take place today in Cleveland, against the Case Western Reserve Spartans. When asked about the approach to these two games, Barthel remarked, “We need to have a very similar approach as we did last weekend. We had a focused energy that allowed us to pick up two wins, and we need two more this weekend. Offensively, we need to execute well and make sure we are crashing the offensive boards aggressively. On the defensive end, we need to play sound fundamental basketball, communicate well, and rebound.”

The Spartans, who are currently at the bottom of the conference, will be going into Friday’s game with five losses and no wins. Although it should be an easy match-up for the South Siders, they know to expect just about anything from their fellow UAA competitors. “This week in practice we worked on off-the-ball defense and making sure we were in the right positions defensively. We also went through a lot of film to make sure we understand what we did well and what we can improve on from the last few games,” Barthel said.

This weekend is a surefire way to gain ground in the conference ranks. The final match of the weekend will be played Sunday in Pittsburgh against the Carnegie Mellon Tartans, who currently hold a record of 3–2 in the conference. This game should prove to be more of a test for the Maroons, especially as rebounding from Friday games to play on Sunday has been difficult for the squad in the past. It will be a tough match, but the Maroons are looking to lengthen their win streak and move ahead in conference play.