Last weekend, over 200 buildings opened their doors to the public for Open House Chicago. 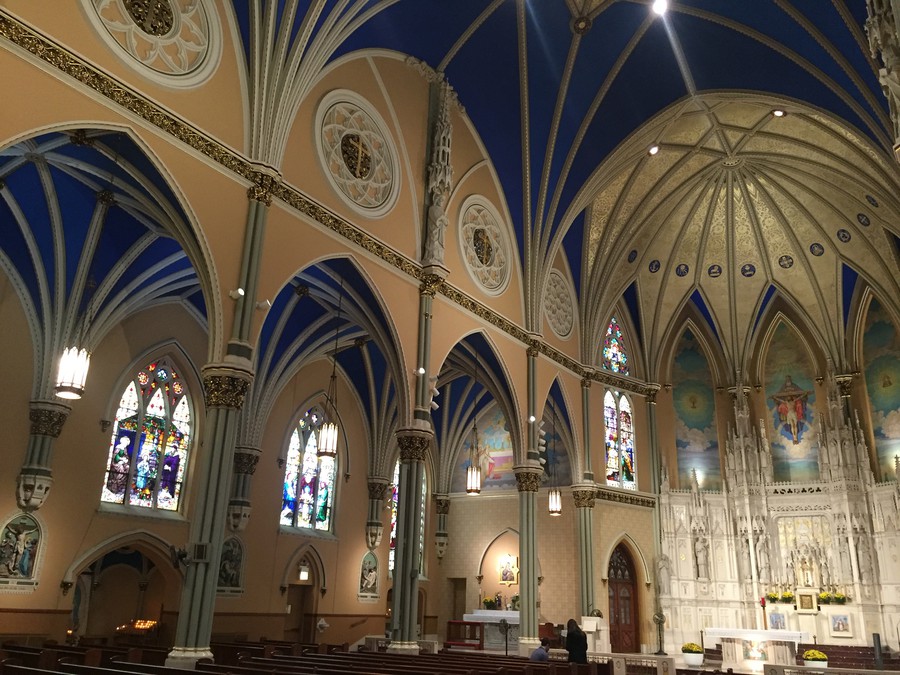 This past weekend, over 200 architecturally significant buildings—including private residences, offices, places of worship, entertainment venues, and more—opened their doors to the city to celebrate Open House Chicago. Organized annually by the Chicago Architecture Foundation since 2011, the celebration allows visitors to tour buildings normally closed to the public. 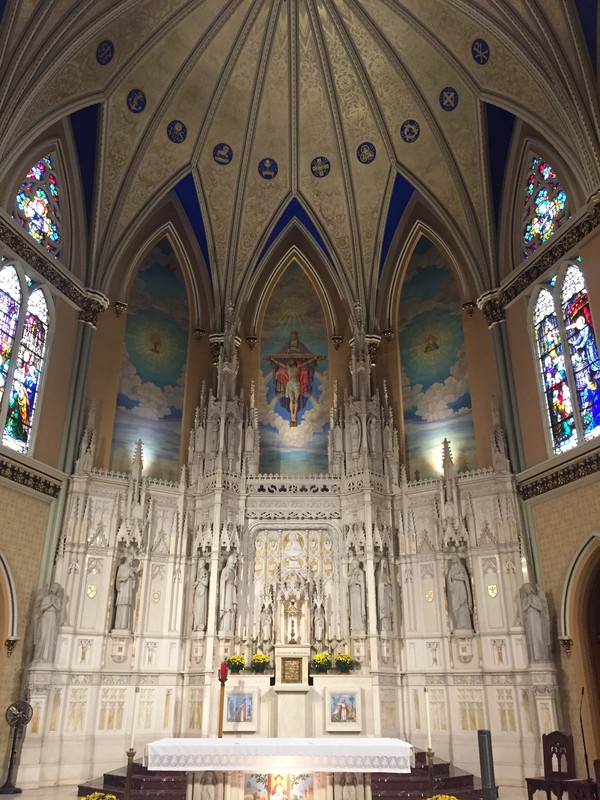 At the intersection of Lincoln, Southport, and Wellington, the massive St. Alphonsus Church looms over the storefronts and residential buildings of Chicago’s Lakeview neighborhood. Elevated from the street level by stone steps on its facade, the church’s Gothic architecture is immediately visible from the six-way intersection below. Built in 1896, it is currently the only church in Chicago to offer monthly services in German.

Peering east over Southport, St. Alphonsus’s facade features hefty, light-colored stones stained with green runoff from the rusted ornamental finishes on the towers and the rooftop. Pointed arches and metallic pinnacles command the eye upwards to appreciate the detailed crosses lining the central tower and the sky. Characterized by heavy building materials and the earthy colors of brown, black, and gray, St. Alphonsus’s exterior is solemn and mature.

But the east entrance tells a different story. Hooded by a tunnel-like series of shrinking Gothic archways, the powder-blue doors are plain, bright, and decorated with clean, white squares that cling to the doors like empty picture frames.

The entrance foyer has walls painted a warm yellow-beige and greets visitors with a mural of the eponymous saint and the faces of smiling cherubs carved into a white plaster molding. Most striking, however, is the cobalt ceiling bisected by white structural ribs sprouting from the light gray floral design in the center.

The cobalt ceiling continues to the main body of the church, where it expands over the pews in three central groined peaks like a rich, untouchable sky. A geometric star-like form plated in silver covers the center of each groin, and delicate white ribs coalesce into the characteristic Gothic archways that line each side of the nave. Each archway is supported by a pale green column topped off with an ornate golden capital, behind which are beautiful stained-glass windows illuminated by the morning light.

Amid all this color, the altar at the west end of the church is surprisingly desaturated. The ceiling above the altar boasts a groined vault of its own, but plated in an iridescent material with a silver sheen. Above the altar, two more sets of stained-glass windows frame a pastel triptych mural; below, earthy red marble steps bring the light and airy focal point of the church back to earth. 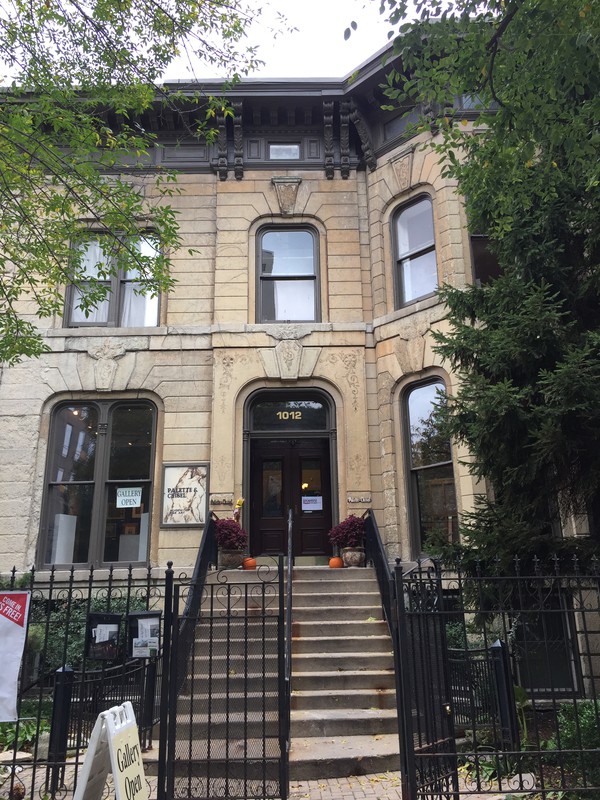 Hiding behind a pine tree among the high-rises of Gold Coast, 1012 North Dearborn Street blends elements of Italianate mansion and brownstone in its facade. Faded yellow stones form three stories of light-catching bay windows while a sweeping concrete staircase leads up to glass front doors anchored with tiny Corinthian columns. The small mansion was one of the first projects to crop up in the area after the Chicago Fire of 1871 reduced the neighborhood to ashes. Completed in 1874, it was first the home of the wealthy William Waller. By 1921, it became home to Palette & Chisel, a non-profit fine arts organization that has occupied the building since.

The lavish interior of the first floor has been converted to an art gallery and includes new work from Palette & Chisel’s members and students every two weeks.

Up the dark wooden banisters and burgundy carpeting of the grand staircase is the second floor of the Academy, which houses art studios. Although the studios are normally private, several artists opened their doors for the Open House weekend. One studio was a chaotic collection of easels and gesture drawings; another a quaint bedroom with an easel overlooking the bay window; the third a composed office-like space with framed paintings on the walls. 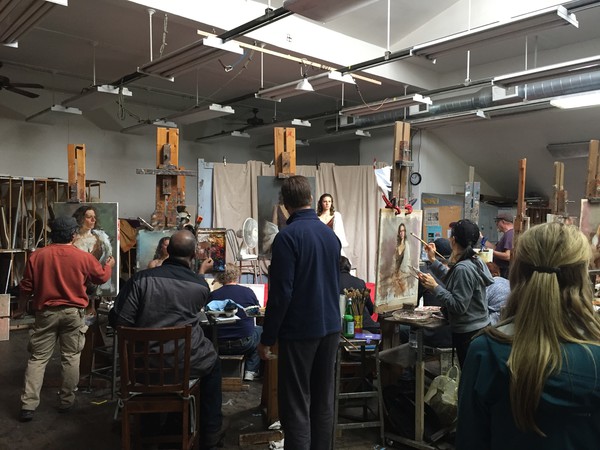 The Academy was first founded when a group of students taking night classes at the School of the Art Institute wanted to practice their figure drawing, and the top floor is dedicated to the painting and sketching of live models. On Sunday, a live model wearing a brown velvet dress and white fur coat gazed into the distance as over a dozen artists surrounded her in a semi-circle of easels. The visitors clustered behind, privy to the amazing diversity in painting styles, from photorealism to pointillism to complete abstraction. 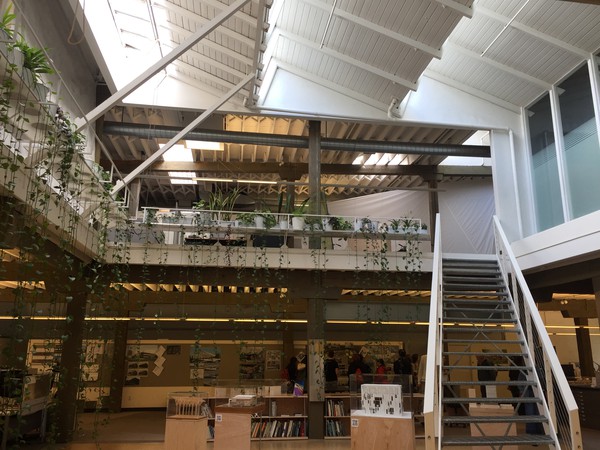 Walking down Hubbard Street in the Loop, it’s easy to miss the entrance to the white brick former-warehouse-turned-office of Chicago-based architecture firm Ross Barney. The ground floor of the former warehouse now has street-level access to bars, restaurants, and a colorful printer’s shop. Although the building’s exterior is cheery in its bright simplicity, it’s nowhere as monumental as the Gothic St. Alphonsus or as rich as Palette and Chisel’s brownstone. It does, however, participate in an architectural dialogue with past visions of grandeur: The brick pillar supporting the awning of the entrance incorporates a simple version of a classical capital, and the roof extends slightly over the street in a simplified allusion to any classical temple’s entablature.

A volunteer led visitors through a barren hallway to an elevator in the back. On the fourth floor, doors open to an unexpected vista: the open office space of Ross Barney Architects. Founded in 1981 by Carol Ross Barney, the firm has recently completed projects including the CTA’s Cermak–McCormack Station, the Fermilab Illinois Accelerator Research Center, and the South Campus Chiller Plant at Oklahoma State University.

The firm’s office now takes up the top two floors—the fourth and fifth—of the warehouse, which are united by a two-story atrium that filters in bright light from overhead. Compared with the chaos of the street and the claustrophobic nature of the dingy entryway and elevator, the layout of the office is open, energetic, and streamlined. The ceiling is supported by a series of rustic wooden pillars that imitate steel I-beams with a softer edge. Industrial track lights hang suspended from the ceiling over a village of cubicles with frosted glass walls.

The Open House allowed visitors to roam the office and view paper blueprints, digital renderings, and wood-and-cardstock mockups of the firm’s latest designs. Members of the Ross Barney team milled about explaining their projects, which included a renewal program for Chicago’s waterfront, a new architecture building for U of I, and an aesthetic overhaul of the Belmont Blue Line station in Avondale. 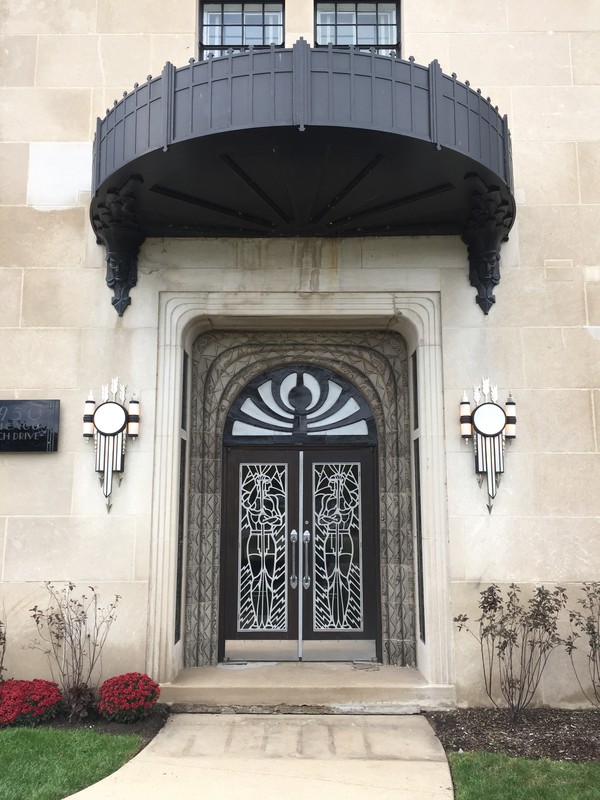 The Powhatan, one of Chicago’s most iconic Art Deco–inspired residences, towers over the eastern edge of historic Kenwood just north of Hyde Park. Constructed with a reinforced concrete frame and clad in Indiana limestone, the apartment tower was completed in 1929. Residents of the luxury co-op can boast not only of living in a designated Chicago Landmark, but in Chicago’s only building with 24-hour elevator operators.

At 22 stories, the Powhatan towers over neighboring Burnham Park, affording the east-facing windows a view over Lake Michigan. The proximity to the lake is alluded to in the wavy patterns at the bottom of the colorful terracotta mosaics that separate each of the top 18 stories from their vertical neighbors.

The double doors at the corner of the building depict two stylized human figures set in silver against a backdrop of dark glass, and the entryway is flanked by ostentatiously Art Deco–style sconces. Inside, an Open House volunteer welcomed the visitors into the outer lobby, a compact space encircled by metallic fluted pilasters and small, vibrant mosaics.

The inner lobby is long and spacious, anchored by a magnificent fireplace. Broad strips of colorful forest imagery on a background of dark wood paneling flank the pyramidal black fireplace, above which hangs an elegant mirror etched with geometric lines. A small crowd gathered around the fireplace as an Open House volunteer explained a mosaic set into the mantle—a humorous rebus whose encoded instruction to “put coal on” the fire was thwarted by generational changes in the way we talk about punctuation. 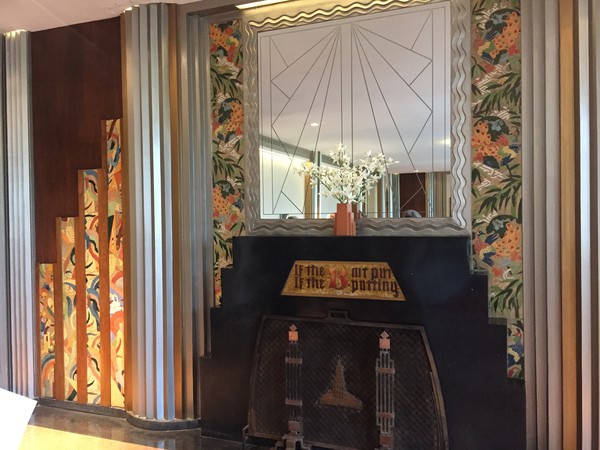 Although restored with the installation of new infrastructure, the building’s original elevators—characterized by etched mirrors and ornate silver finishes—remain in use to this day. Beside the north elevator lobby, two sets of gold-painted wooden doors carved with twin cranes lead to a balcony overlooking an indoor swimming pool. Although the room has yet to be refurbished fully to its original state, the team has successfully restored the walls and ceiling based on a photograph taken after the Powhatan’s completion.