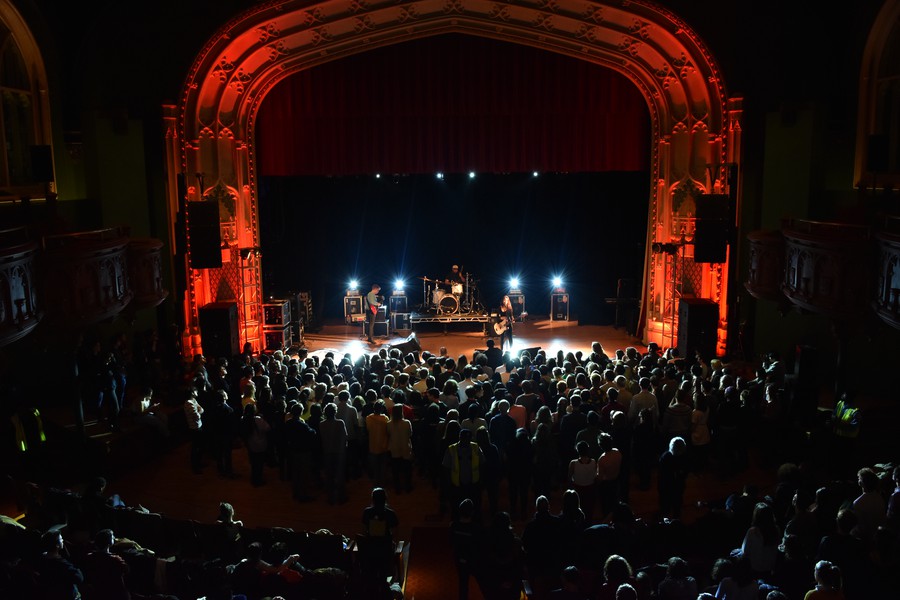 Long before the doors to Mandel Hall opened on November 11, a crowd was amassing behind the ticket stand and merch table. Eager fans were awaiting the indie rock star Mitski, opened by the R&B “pagan gospel” singer Serpentwithfeet, both of whom were being hosted by the Major Activities Board (MAB) for its Fall Show.

Moving fluidly across the stage, Serpentwithfeet exuded a commanding yet unassertive presence, raising a leg as if to stomp it to the ground only to gently alight onto the stage floor like a bird. His music, too, was sublime, orchestral and at times even tempestuous, underscored by a vulnerability and desperation that made it all the more harrowing. Throughout the performance, his past as a choirboy emerged through a miasma of trauma in grandiose falsettos that hung suspended in the air, paralyzing the astonished audience members before they broke free from the trance and erupted into cheers. With a pentagram on his temple and a doll in his pocket like a sacrificial effigy, Serpentwithfeet was creating a new gospel right before our eyes—not as a sanctimonious preacher but as a confused, damaged, but healing martyr.

Singing the title track of his EP Blisters, a delicate tremolo unfolded like gossamer over a chorus and ethereal string quartet, demanding, pleading, to a lover or to himself: “Where’s your concern?” In “four ethers,” he evoked the esotericism of a centuries-old phenomenology to lament the tensions within himself and in his relationship with a partner. Between songs, he would explain the impulses behind them, describing “language as a currency,” a concept that resurfaced in “penance.” During these reprises, Serpentwithfeet would banter with the audience, often in melody, making his songs blend with his audience interaction. At one point he introduced Muriel, his “newest lil' friend”—a stuffed leopard bag strapped to his shoulders. With a large nose ring glimmering in the flashing scarlet lights, a beige shirt torn at the sleeves and down the torso, and matching high heel boots, Serpentwithfeet’s animal companion was not the strangest part of his look.

After an explosively emotive performance, the show’s opener retreated to the darkness backstage, leaving the audience with an aftertaste at once dismal and exultant—the perfect precedent to the headliner: Mitski. Even as the band set up, the audience’s roar grew louder and louder, reaching a climax when Mitski herself ascended the stage. After some prefatory vocalizations, the drummer-bassist-guitarist trio opened the set with “Francis Forever,” a righteously melancholy track from the critically acclaimed album Bury Me at Makeout Creek. Throughout the show, Mitski performed an assortment of songs from the aforementioned album as well as her more recent one, Puberty 2, released in 2016.

Like a lo-fi snake charmer, Mitski coaxed out viewers’ deepest, most self-pitying selves with her cathartically raw lyrics, inviting them to revel with her in their collective misery and optimism, head-banging away to songs like “Dan the Dancer,” “Drunk Walk Home,” and “Townie.” The audience was especially eager when Mitski played “Your Best American Girl,” a biracial ballad about self-acceptance and rejection that reaches a climax with the too-relatable lines: “I think I’ll regret this.” However, she also paid tribute to the softer aspects of alt-rock with songs like “First Love/Late Spring” and “Thursday Girl,” which was recently featured in a surreal short film directed by Emily Yoshida. Between songs, Mitski graciously thanked the audience members for their attendance and support, saying, “This is what I’ve always wanted to do. This is what I meant to do, so thank you so much, so much, for letting me do this.”

Toward the end of the show, Mitski took to the stage alone with a guitar and played her final few songs for the evening, including the mournfully tranquil “Burning Hill” and the ragefully impassioned “My Body’s Made of Crushed Little Stars.” Although this was meant to conclude the event, the audience’s subsequent cheers prompted her return to the stage to play “Class of 2013,” a song her 2013 album, Retired from Sad, New Career in Business. In the powerful but fragile anthem, Mitski lifted her guitar and yelled desperately into the strings for her mother to wash her back “this once, and then we can forget.” If only we could.

Filing out of the hall, smiles pervaded the exiting masses. One viewer described how Mitski “has a great stage presence: powerful when the song calls for it but not too imposing or intense.” Throughout the coming months, she will be touring with Lorde, while Serpentwithfeet continues to tour independently and with Grizzly Bear. It was indeed a spectacular crossing of the two artists that MAB had facilitated that Saturday night, one that combined magic, teen angst, and emotional exorcism.