Tegan and Sara Consecrate "The Con" at Rockefeller Chapel 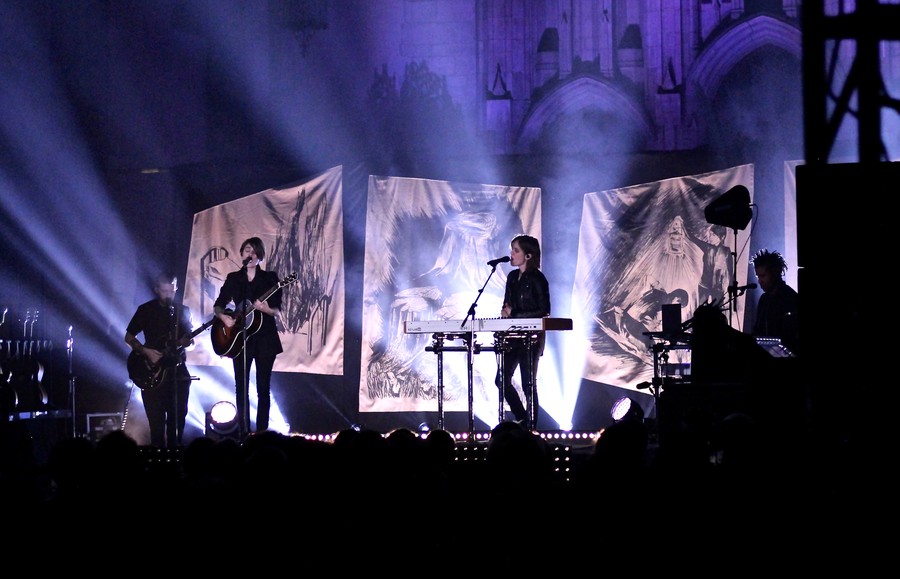 Rockefeller Chapel has been anointed, and not in the typical sense: There were no denominational ceremonies, no baptisms. No priest was present. Instead, what descended over the chapel was of a different profundity. On Saturday night, the music of two ethereal voices filled the depths of the space, echoes reverberating through its cavernous hall. The source of it all: the Canadian identical twin duo known as Tegan and Sara.

The concert, which sold out online within five minutes of the ticket release, was a stop on The Con X: Tour, a series marking the 10th anniversary of their album The Con. The duo commemorated the album by playing it in its entirety. Returning to older songs gave longtime fans a chance to reminisce about their first experiences with the album and to reflect on its newfound meaning a decade later. The remake gave Tegan and Sara a chance to look back on that time in their lives and observe how they have changed.

As they pointed out during the show, the album is mostly comprised of depressing songs with gloomy lyrics. “Are You Ten Years Ago,” for example, goes: “The pressure of this life is so/ You can't be held accountable/ If you go, you go.”

“I was so depressed that I did not have fun at any of the Con shows,” Sara said, reflecting on her emotional state during The Con album cycle. She compared her touring experience to exercise: “Sometimes during hot yoga I think, ‘this is so stupid,’ and, ‘there is no reason why a human being should subject themselves to this on purpose.’” But she also pointed to how there is always a moment when “you stop feeling cynical and self-loathing.” For the twins, recording the album this time around felt different. “It has actually been extremely cathartic and really fun,” Sara said.

Although the two seem to have moved on from that dark time in their lives, they were able to tap into songs with just as much emotion as they did on their original recordings. In fact, Tegan played “Are You Ten Years Ago” with such intensity that Sara was prompted to check in with her. But Tegan reassured her sister, “Oh god, I’m not back in that time at all.” Turns out, Tegan was actually thinking about two Siamese cats that have yet to be adopted (the twins are cat-obsessed, and their own cats are featured prominently on social media). Tegan’s comment lightened the mood, and the signature humor for which the two are known returned as they bantered in between songs.

This banter has become an anticipated component of their sets. When speaking to each other and the audience, they make the audience-performer dynamic more personal, bringing their personalities to the stage.

Tegan revealed that her song “Dark Come Soon” is not part of a depressive streak, as the title seems to suggest. Instead, she wrote it about her anticipation for the dark, as this was the only time in the day when she could talk to her new girlfriend.

Sara jumped in, noting that whether or not their songs are interpreted according to their original meaning is unimportant. “That’s what is so cool about music!” she said. “We can all hear the same thing and it might bring up memories and thoughts and feelings and emotions that are really unique and we can all come and sit in a place together and celebrate that.”

Tegan tried to bring this point one step further, relating differing interpretations of their music to the debate about the infamous dress (gold and white vs. black and blue) that went viral. But her comment, which prompted a back and forth discussion between the two about the topic and the relevance of the reference, brought the quirky banter to a new level. “You guys will be the show we acted really strange in front of,” Sara told the audience. 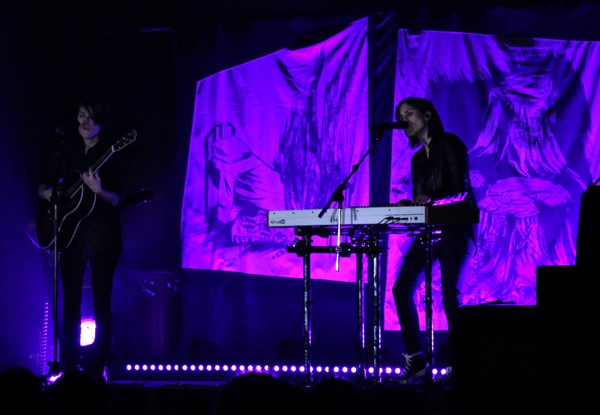 Aside from playing every track on The Con, Tegan and Sara also played seven other songs from various points in their career. There were deep cuts like “The Ocean,” off of their 2009 album Sainthood, as well as “White Knuckles” from their most recent album Love You To Death (2016). They played fan favorites as well, such as “Living Room” and “Closer.”

The tour not only marks the tenth anniversary of The Con, but also celebrates the release of their album The Con X: Covers, featuring covers from artists like Hayley Williams of Paramore, Sara Bareilles, Cyndi Lauper, and Ryan Adams. The creation and proceeds of the album will go directly to their new non-profit organization, The Tegan and Sara Foundation, which aims to raise money for established LGBTQ+ organizations that focus on those who identify as women.

“Sara and I obviously are queer and we have always been political and socially active,” explained Tegan. “But the last few years we have acknowledged that with an increase in popularity our platform is developing, so we decided to legitimize the things that matter to us.” Part of the proceeds from their tour tickets will also go to the foundation.

The band has always functioned as a resource for its queer fans, with countless people disclosing their queerness to the duo through letters and other means. The two are making a concerted effort through their foundation to, as Sara said, “spread gay stories” and help that same group that has been so impacted by their work.

The concert alone was evidence of their ability to offer help, for the performance was cathartic for the entire audience. With all songs played acoustically, the sound was truly ethereal, creating a different type of religious experience in the chapel. Although Rockefeller might not seem like a typical concert venue, with the audience seated throughout the show and the stage more makeshift than most, the music transcended its setting.