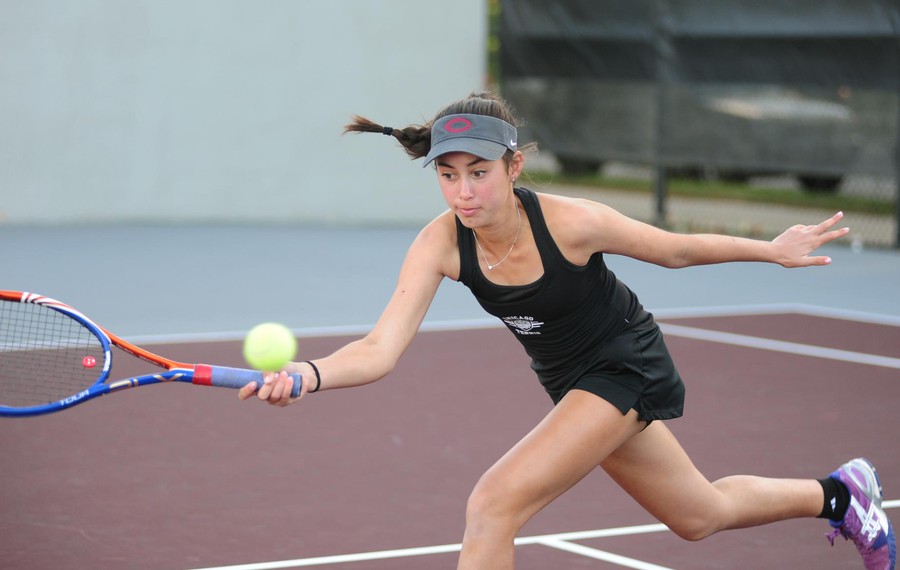 Second-year Kat Stevanovich chases after the ball with intense focus.

The University of Chicago No. 5 men’s team competed this weekend at the ITA National Men’s Team Indoor Championship, while the No. 10 women hosted Principia College and John Carroll University in a pair of matches on Saturday. The men advanced to the final match of the tournament with 7–2 wins over No. 9 Pomona-Pitzer and No. 7 Wash U. In a rematch of last year’s final, the Maroons ultimately fell again to No. 2 Emory University. On the women’s side, the squad dominated both matches, sweeping Principia 9–0 and knocking off John Carroll 8–1.

In the opening round of the ITA Indoor Nationals, the No. 3­ Maroons swept doubles play to take a 3–0 lead over Pomona-Pitzer. UChicago’s top four singles players—third-year David Liu, third-year Nick Chua, second-year Charlie Pei, and third-year Luke Tsai—won their matches in straight sets to clinch the victory for the Maroons. The squad dropped the No. 5 and No. 6 singles spots in super tiebreakers.

Saturday’s semifinal featured a conference matchup between the Maroons and the No. 4 Wash U Bears. UChicago took a 2–1 lead after wins from first-years Ninan Kumar and Erik Kerrigan at No. 1 doubles and third-year Bobby Bethke and Pei at the No. 3 spot. The Maroons then took five of six singles matches for a place in Sunday’s finals.

For the second straight year, the Maroons faced the Eagles in the championship round. After falling to 3–0 in doubles play, UChicago dropped matches at No. 1 and No. 3 singles to hand Emory the title. The lone victory of the day came from Chua at the No. 2 spot. Once Emory secured the 5–1 win, the final three matches were left unfinished.

Liu said of their performance, “I think our team took a step forward this weekend. We beat a Pomona-Pitzer team that we’ve never beaten, and a Wash U team that has historically given us a lot of trouble. It wasn’t the final result we were hoping for, but this tells us that there’s clearly work to do to be ready for the second half of the season. That said, we are excited to go into the outdoor season as the No. 2 team in the country.”

Back at home, the No. 10 UChicago women improved to 7–0 this season with dominating victories over Principia and John Carroll. In the first set of matches, the Maroons swept the Panthers 9–0, taking home 8-0 wins at the No. 2 and No. 3 double spots. Second-year Rachel Kim, fourth-year Tiffany Chen, and first-year Alyssa Rudin each picked up 6–0, 6–0 wins in singles play. The Maroons then went 3–0 in doubles matches against John Carroll, knocking off the No. 2 and No. 3 pairs 8–0. At the No. 2 singles spot, first-year Marjorie Antohi came away with a 6–0, 6–0 win.

This weekend, the undefeated women’s team has its chance at the ITA Indoor Team Championship when it travels to Murfreesboro, TN. The men’s team has a short break before returning to competition on March 10 as hosts to Niagara University.