"Watch Your Language, Cunt" Puts New Spin on Growing Up 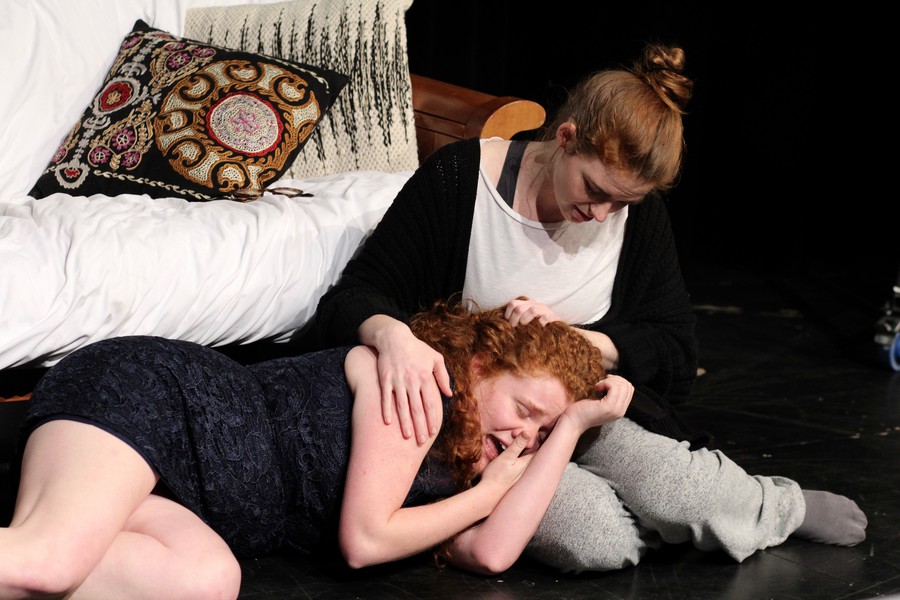 In the play, Kat (Emma Maltby) and Sam (Margaret Glazier) face the joys and pains of growing up.

With a sparse set featuring a white sofa and end-table, the play began with fourth-year Dee Nitz, who took the stage as the dramatic Duchess Jean von Franzia. The Duchess situates the plot in the present day, describing Billboard hits of 2017 and the eventful early days of the Trump presidency. The protagonists—sisters Sam and Kat (second-year Margaret Glazier and third-year Emma Maltby)—appeared and immediately began bickering, setting the tone for their relationship. Their arguing establishes the main themes that develop throughout the play: Kat’s queerness, her older sister’s nervous energy, and their complex relationship with their mother and grandmother.

This play is a set as a bildungsroman in reverse. As the scenes progress, the characters travel backward from the brink of real adulthood to the tribulations of childhood. They start out discussing the prospect marriage and children and ultimately end worrying about how to clean up a party before their parents find out.

Once more, Duchess Franzia sets the scene, this time in 2008, with news of Obama’s recent election and an excerpt from Flo Rida’s classic “Low.” Sam attempts to persuade a stubborn Kat to attend a Thanksgiving dinner at their grandmother’s house. The third scene rewinds to 2004, with Sam and Kat on summer break—from college and high school respectively—avoiding taking their ailing grandfather for a walk. The piece ends with unruly high school party and a heart-to-heart between the sisters, about teenage insecurities.

McLeod’s play hits all the right notes of a coming-of-age story: angst, tenderness, and a relationship rooted in tension. Witnessing these familiar elements unwind in reverse, accompanied by reminders of pop culture of the day, made the play feel like a nostalgic memory. To anyone growing up with a sister, a shouting match where Sam tells Kat to “watch her language, cunt,” rings hilariously true.

McLeod’s characters shone. The two main actresses inhabit their characters at four extremely different stages of their young adult lives, each portrayal building on the one before and exposing a new facet of the character’s personality. As the play progresses and Sam and Kat become younger, their different but overlapping stages of growth are tense, beautiful, and realistic.