Fourth-year Frankie Fung and third-year Mykhaylo Usatyuk managed to levitate objects up to one millimeter in size.

Two undergraduate physics students at the University of Chicago recently led the discovery of a new method for levitating objects using heat.

Fourth-year Frankie Fung and third-year Mykhaylo Usatyuk managed to levitate objects up to one millimeter in size in the Chin Ultracold Lab at the Gordon Center for Integrative Science, including small glass and ceramic spheres, lint, dust, and ice particles. 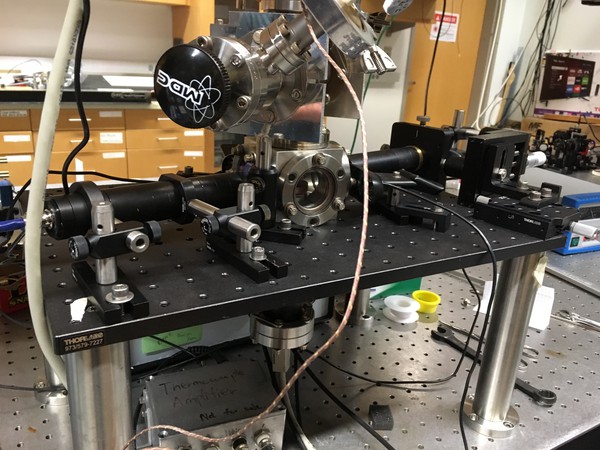 In this setup, the two plates form a temperature gradient, which creates a thermophoretic force upwards.

Their findings could help researchers interested in microgravity environments or multi-body interactions design new experimental setups. According to their paper on the method, “levitation of particles in ground-based experiments provides an ideal platform for the study of their dynamics and interactions in a pristine isolated environment and has broad applications in fundamental and applied sciences.”

The levitation relies on thermophoresis, a phenomenon describing the movement of particles in a temperature gradient. Because warmer air particles tend to have a greater velocity than colder air particles, they can sometimes “push” small objects away from a source of heat.

In Fung and Usatyuk’s setup, the two plates form a temperature gradient, which creates a thermophoretic force upwards.

Both Usatyuk and Fung learned of this opportunity by reaching out to professors they were interested in working with. Usatyuk was initially interested in ultracold atoms, so he applied for a position at Chin Lab, which specializes in ultracold physics. “It was sort of random,” said Usatyuk, who stressed that undergraduate opportunities typically depend on funding and the number of graduate students working on a particular field.