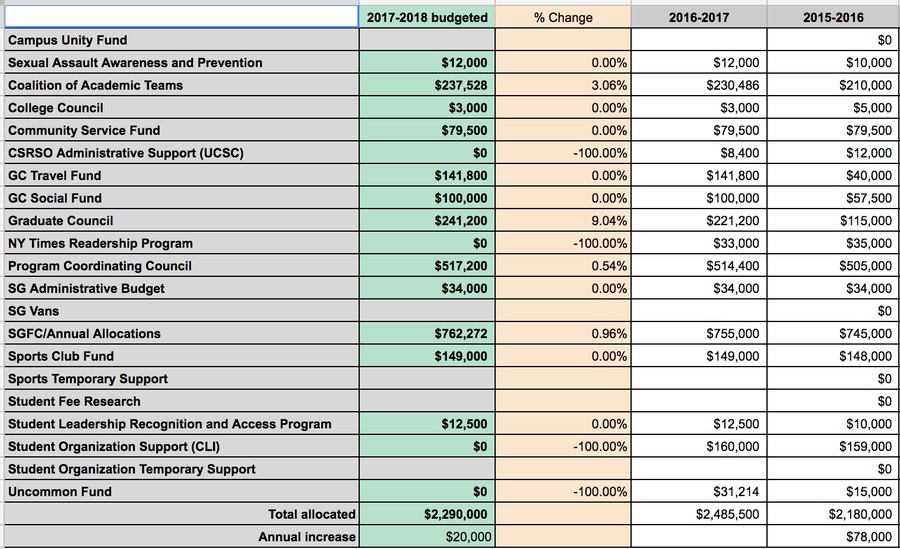 The proposed SG budget for next year.

By Rachana Muppa   and Jamie Ehrlich

On Monday, Student Government (SG) Assembly passed the proposed budget for the 2017–18 academic year. After 23 minutes of discussion between Graduate Council and College Council members, the budget passed with 24 in favor, four opposed, and two abstentions.

The SG budget is generated from a pot of money gathered from the Student Life Fee, a quarterly fee paid by undergraduate and graduate students on campus. Each year, the budget, which often totals over $2 million, is allocated to a number of funding committees supporting student groups, campus initiatives, and the College and Graduate SG Councils.

Prior to 2016, when funding committees didn’t spend their total allocated funds, the leftover money would lay dormant in individual accounts, slowly accumulating over time. In the budget for the 2016–17 year, Former SG President Tyler Kissinger swept up the layover funds in the various bank accounts and accounted for them in the allocated budget. SG was able to provide services beyond the amount provided by the SLF due to over $200,000 in rollover funds.

SG President Eric Holmberg said in an interview with The Maroon that SG is trying to establish a new system in order to prevent the accumulation of rollover funds year-to-year. The system includes spending rollover funds on the Summer Fund, which funds RSO projects, purchases, and activities during summer quarter. The proposal calls for all rollover funds to be expended by November 1.

Calvin Cottrell, the third-year expected to become SG President next academic year—barring disqualification or a write-in candidate—applauds the goal in this proposed system to protect RSO funds in light of the fact that the SG reserves are depleted, but opposes SG legislation to dictate the spending of rollover funds to the first few months of a year.

“By restricting the time frame for future slates to use rollover funds SG would be taking away the ability for slate to react to needs as they arise on campus. Several scenarios could require the spending of rollover funds: committees overspending, the need for campus wide events to respond to pressing issues, or the discovery of SG partnership opportunities unknown by November 1.” Cottrell said.

“The understanding should be that slates, along with the Assembly, find responsible ways to spend down reserves. There is no need to require that be done by November 1 every year.”

However, no extra funds exist this year. The new budget proposal attempts to “[maintain SG’s] current level of support for students with fewer dollars.” In trying to close the gap between last year’s funding and the lower amount available this year, the proposed budget states that “any reductions should first affect line items that do not fund student organizations directly.” Items that will face cuts are considered to be redundant or direct funds to administrators rather than students.

The proposed budget recommends a cut in $160,000 from the Center for Leadership and Involvement (CLI) and a $8,400 cut from the University Community Service Center (UCSC). The CLI provides administrative support within the RSO and Student Government community, and the UCSC is part of the Office of Civic Engagement (OCE), which supports the community service programming of student-run organizations. According to Holmberg, both of these cuts have been worked out with the administration, and both the CLI and UCSC have agreed to make up for the funds being lost in the budget through their other funding sources.

Holmberg argued that these costs should have been shouldered by the administration to begin with. “Why are Student Life Fee dollars paying for [the CLI and UCSC]? You would think the administration should be providing that so that they can lead student life. It’s kind of on them to have that. So we made a case to CLI that we shouldn’t be funding that… we worked it out so [the CLI and UCSC] are going to find the money from elsewhere,” Holmberg said.

The University confirmed on Friday that they were aware of the cuts, and that the CLI “will continue to serve and support the RSO and Student Government community at levels consistent with prior years.” University spokesperson Marielle Sainvilus also said that the UCSC and OCE just learned of the proposed cuts this week and have not yet determined any potential impact.

“It’s all money that was going to administrators before that is now going to students. So that’s good,” Holmberg later mentioned.

Another proposed cut is the New York Times Readership Program which was budgeted $33,000 last year. Due to a price increase per paper, SG has only been purchasing 150 copies each day— which, according to Holmberg, leads to papers being often all taken by 9:30 a.m. Holmberg also suspects that most of the papers are being taken by individuals not paying a student life fee, due to the high percentage of complaints SG receives about the program from non-students. Following the cut, access to this and other major newspaper will still be available through the UChicago Library, which SG would try to publicize. The University will still get the Times delivered through the end of the year.

The Uncommon Fund is also proposed to be dissolved in the budget for next year, which in the past has received approximately $31,000 dollars. The Uncommon Fund provides funding to “uncommon” and typically out-of-the-box project proposals. Holmberg called the fund “redundant,” saying there are many sources of funding if students have an idea for a project, citing both the Dean’s Fund and the funds allocated to both College Council and Graduate Council. He called the Uncommon Fund as is, a “bureaucratic mess,” due to the need to create separate financial accounts for each project, with an extreme lack of accountability. Last year, when the various accounts were emptied out, there was $70,000 just sitting in the dormant accounts.

“The decision to eliminate the Uncommon Fund was unnecessarily punitive and counterproductive. It is true that the Fund has seen a precipitous drop in funding and interest over the past few years. However, the way to save the Fund was not to eliminate it completely, especially when other budget line items are bloated. Truthfully, I think part of the lack of interest in the Uncommon Fund could be attributed to the lack of communication from this year’s Executive Slate. That can easily be remedied in the coming year,” third-year CC representative Chase Harrison said.

Alongside the budget cuts also come budget increases. CAT is receiving an increase of $7,000, which will help accommodate the addition of a sixth team on CAT, Moot Court. With the increase in funding, along with the addition of a new team to CAT, funding amounts to the individual teams should remain similar to last year’s budget.

The Program Coordinating Council is also receiving a small increase. According to Holmberg, the small increase will make a large difference for student organizations like Fire Escape Films.

SGFC and Annual Allocations will also be both receiving an increase. Holmberg plans to propose that SGFC funds become available to organizations recognized by graduate divisions. They expect to see an increase in demand due to this proposal, and SGFC is proposed to receive an increase in their budget.