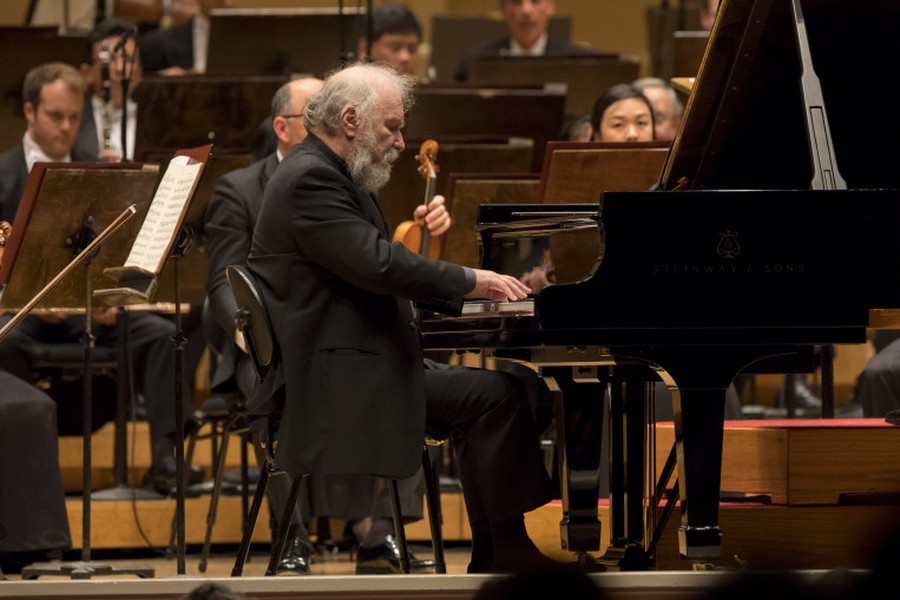 I have to admit that my expectations going into Thursday night’s concert at the Chicago Symphony Orchestra (CSO) were extremely high. Radu Lupu has been a hero of mine for a long time, particularly on account of his legendary 1987 Decca recording of Brahms’s Op. 79 Rhapsodies and late piano pieces, Op. 117–119. His is known to be gold standard piano playing: poetic, intelligent, and thoughtful.

This weekend’s program gave him every opportunity to showcase these qualities. Beethoven’s fifth piano concerto (aptly subtitled “The Emperor”) is a masterwork of the genre with extraordinary emotional range, from its declamatory opening to its heartbreakingly beautiful slow movement to its ecstatic rondo in the finale. Typical of Beethoven’s heroic middle period, the concerto draws inspiration from Napoleon (specifically, his invasion of Vienna), contrasting military rhythms with spiritual intimacy.

I was similarly excited to hear Franz Liszt’s Dante Symphony for the first time. In general, I love the music of Liszt: Contrary to the stereotype that his music is one of empty virtuosity, it embodies to my ear the Romantic spirit with its power and expressivity.

It pains me to write this, but Radu Lupu’s performance on Thursday felt lazy. I have great respect for his past work; however, what I heard at Symphony Center was an exception to this rule. I caught some buzz in the lobby after the performance about missed notes. Honestly, that doesn’t bother me: Some of the greatest recordings of all time have technical errors, including those by pianists from Kempff to Schnabel to Rachmaninoff himself. Mistakes don’t matter if the playing itself has integrity, depth, and consideration. I wouldn’t describe what I heard on Thursday with any of these words. The opening cadenzas were lethargic, and the entire first movement lacked the faintest energy—let alone grandeur or passion. Lupu’s sound in the middle movement was inappropriately fuzzy, and the melodic arc was all but nonexistent.

Perhaps the most offensive moment was at the very end of the piece. Lupu again flubbed the final run (a point which would not necessarily ruin a performance for me) and excused himself with a wave of his hand at the keyboard and audience—as if to say, “Who cares?” It brings me no pleasure to write such things about a musician of the highest caliber (and in every aspect, a better pianist than I), but this apparent disregard in front of a great orchestra is a real shame.

Yet under music director Riccardo Muti, the CSO delivered stellar performances of both pieces. Often criticized for his interpretations of core German masterworks, Muti’s success with the Emperor concerto was especially noteworthy. On Thursday, the maestro brought subtlety to a piece that risks a rash performance: His direction was considered, drawing vitality and nuance from the orchestra in certain passages and sensuous beauty in others. The second and third movements were nothing short of exceptional. In particular, the strings’ full, luscious sound owes much to Muti’s direction: The violins sang with elegance in the slow movement and played with engaging bite in the finale. Likewise for the winds, who played with sweep and exuberance. Even the timpanist distinguished himself in a normally nondescript part.

Liszt’s Dante Symphony was also played with gripping conviction, despite the piece’s problems. A musical representation of Dante’s Divine Comedy, the work itself was kitsch at its most tedious, dragging on for nearly an hour. Worst of all, it ended with a truly vomit-inducing Magnificat appropriate for the soundtrack of a C-list, direct-to-VHS Christian flick.

None of this is to say that the concert was entirely without merit. The CSO played convincingly and beautifully, and Riccardo Muti showed Chicago how lucky we are to have him. But for all my expectations entering the hall, I left it disappointed.

In the original version of this article, Decca Records was misspelled. The Maroon regrets the error.