Memes might not be the best way to address FIJI’s racism. 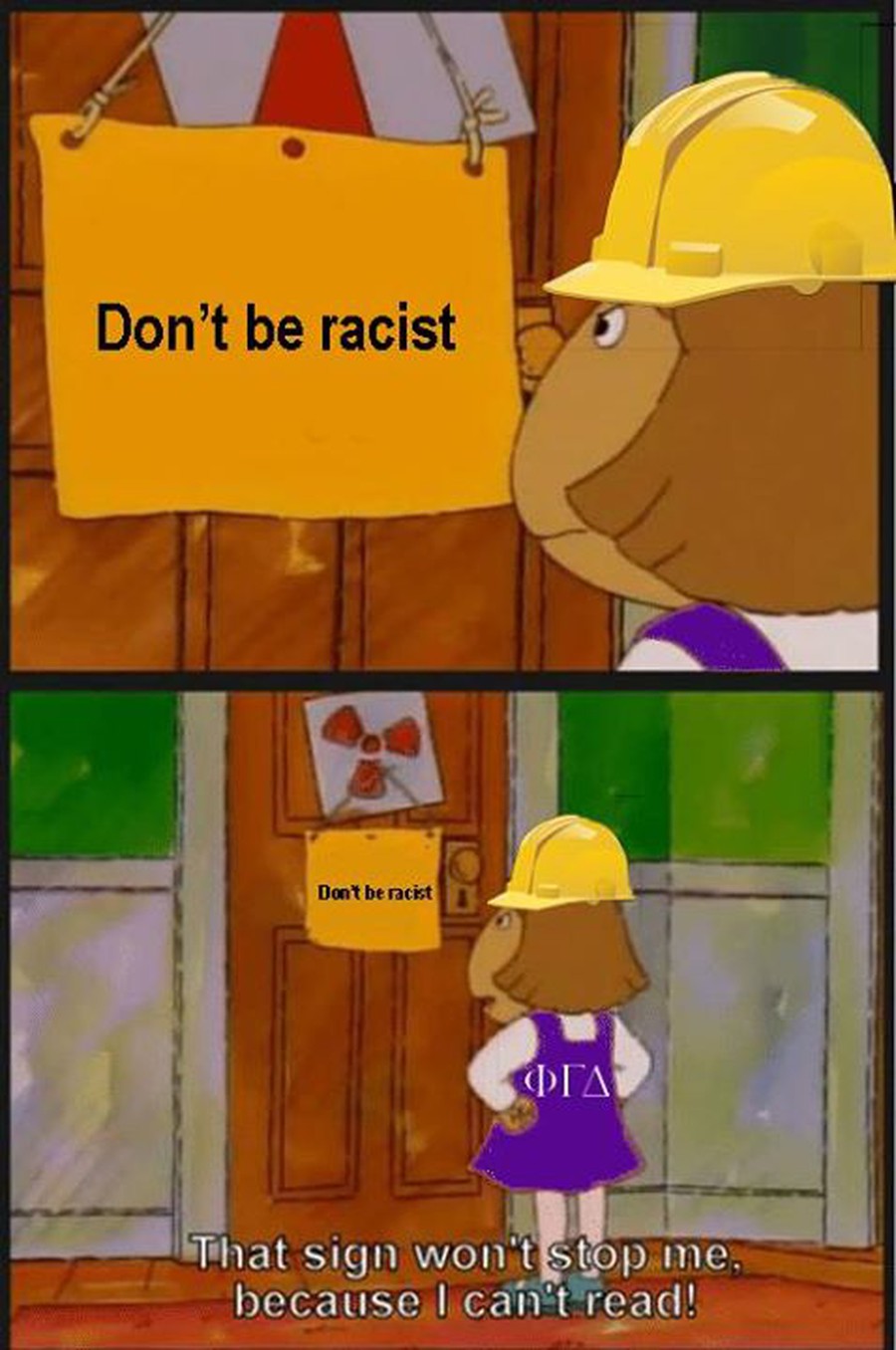 However obvious it might be, it is important to confront just how increasingly dependent political expression is on social media’s empire. We all know what the potential problems are—self-selected audiences and suspect simplifications of larger, more nuanced issues. In particular, the ascension of the “meme” as a vehicle for almost all forms of expression should trouble us because complex social thought is being reduced to witticisms plastered over strange images for popular consumption. (Yes, this is an implicit jab at the explosion of “meme” pages serving particular, usually elite, college communities.)

I am constantly reminded of how effortless undergraduate punditry truly is. When it comes to criticism, we students are incredibly generous. To scorn, to lecture, to engage in that storied practice of  “virtue signaling” is incredibly easy. (My writing this article serves as a perfect example.)

Phi Gamma Delta (FIJI)’s construction-themed party on Cinco de Mayo is only our university’s latest confrontation with its privilege. But it is astonishing just how warped and regressive certain dimensions of our reaction and discontent have been.

Before I move further, it is no unimportant task to keep perspective. Politics during dark times compel us to resurrect, remember, and emulate basic moral premises. Racial insensitivity is terrible, and this party only served to perpetuate certain stereotypes specifically about the Mexican community. It is particularly heinous that this was propagated by a social institution defined by its inherent exclusivity. Critiques of the “fraternity” model are very much an implicit discourse on the problems of class, elitism, exclusivity, and groupthink. It is no surprise that the most heinous ideological aspects of the fraternity are magnified at universities already facing these issues independent of Greek life.

FIJI’s actions should trouble us all. They are deplorable. They should not be tolerated. They deserve our censure.

But are we responding to this episode of insensitivity and racism, whether unconscious or intentional, properly?

Consult our university’s de facto meme page. (I’m reluctant even making reference to this platform, let alone the name of the group itself.) In response to the FIJI incident, we’ve seen a welter of images that invokes the same ideology of “otherization” that our mobilized campus is so passionately against. Should we be comfortable reducing a particular fraternity (and student-athletes generally) into acerbic memetic tropes? Is this the best way to combat the very marginalization of the Other that FIJI has chosen to engage in? Now, of course, not all stereotypes carry the same gravity. One case of insensitivity reinforces and perpetuates reprehensible attitudes that are actively weaponized by power structures in defense of oppressive political programs. Another case is borne from compelling yet haphazardly expressed solidarity.

Nevertheless, there is merit in evaluating what inadvertent insensitivity reveals about otherwise admirable student discourse (something an otherwise uninteresting Facebook meme page has put on full display). I do not intend the grand takeaway to be resisting insensitive attitudes toward “fraternity x,” or football players, or what-have-you. That would be shameful, tone-deaf, and foolish of me. The larger issue at stake here is how the platforms of our expression represent and perpetuate the increasingly unreflecting nature of college political discourse.

What I am troubled by is the reliance on the “meme” as a way for our college peers to express their otherwise valid and meaningful resentment of this situation. I am under no illusions here. Writing this article won’t resurrect the Habermasian ideal of the public sphere. I am not intent on recreating the democratic accountability found in the Athenian demos. Articulating my beliefs through this article won’t inspire a generation of dissident pamphleteers or nation-wide campus protests. Much more will have to happen to occasion the resurgence of political praxis, dialogue, and social thought.

I simply want to bring our collective attention to an oft-mentioned problem—which is to say, our immediate reliance on easy answers and, more importantly, lazy platforms for expressing our political beliefs. Practically speaking, I’m asking us to confront why we have resorted to the creation of trite memes in confronting an episode of racism on our campus.

Now, I am, in theory, sympathetic to some potential justifications, like increased outreach and awareness. I am sure there is some social theorist out there who argues the emancipatory potential of political memes. And indeed, there is a lot to be said about uniting both low and high culture in generating viable political movements. One can only hope this leads to genuine solidarity for those marginalized by the decision of this fraternity’s members. Alas, I am skeptical.

Will “meme culture” demand us to recognize our own prejudices and insensitivities and those of our beloved university? Will it force us to recognize how instances of racism and bigotry have generally been longstanding staples of Greek life not just at the University of Chicago but across the country? Will it inspire us to physically unite in a common space in support for those implicitly targeted and belittled by this fraternity’s act? Or rather, does “meme culture” provide us a problematic failsafe to purge our own guilt and frustration toward this incident, freeing us of the responsibility we have to repudiate and combat racism at the University of Chicago?

During a time in America where the insidious forces of fear and hatred have been rendered clear and potent once more, shouldn’t we hold more hard and fast to actually taking action? These are questions for all of us to consider. I don’t offer a grand theory of how to reconcile this incident, let alone problems of race and class in the American meritocracy. Rather, I am asking us to simply stop and think about what it is that we are doing and whether this is the best way to effect change.

This is not to say that there is no serious work being done and planned by campus activists in response to this incident. There is. This is not to say that we shouldn’t demand administrative support. We should be, and we rightfully are. But nonetheless, we, as concerned students, need to be conscious of our reasons for outrage, the best platform of expressing our outrage, and what will be wrought by the means we seek.

Henry Saroyan is a first-year in the College majoring in political science.

FIJI Responds to Allegations of Racism at Construction-themed Party

Several organizations released an open letter detailing their concerns on May 8. The campus chapter of FIJI responded to the allegations raised by MEChA and other groups in an open letter shared online on May 9.