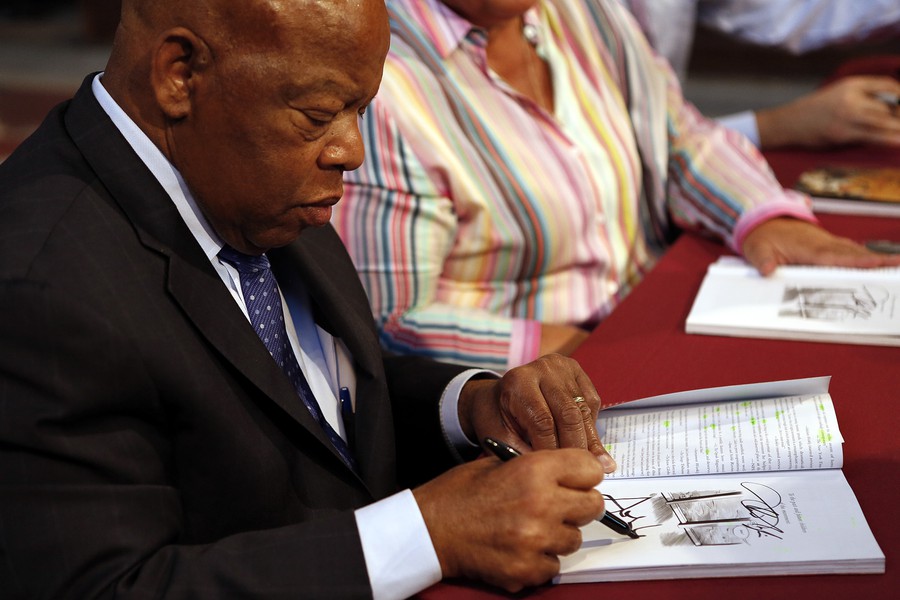 Representative Lewis signing a copy of his new graphic novel.

Hundreds of Chicago Public School students gathered in Rockefeller Chapel on Wednesday morning to listen to civil rights activist and Representative John Lewis (D-GA) and one of his aides, Andrew Aydin, discuss the civil rights movement and their new graphic novel March.

Lewis began by describing his path from growing up as the son of sharecroppers in rural Alabama to becoming one of the most prominent student leaders of the Civil Rights Movement. Lewis recalled asking his family during his teenage years about signs that designated areas for “white men, colored men, white women, colored women.”

Throughout the talk, Lewis rejected this complacency.

“When you see something that’s not right, not just, you have to do something about it. You have to get in the way, get in trouble, good trouble, necessary trouble,” he said.

Lewis then told a story from a stop he made with a friend on the famous Freedom Rides, when students rode buses to the South to challenge segregation.

“Along the way we were beaten, left bloody, unconscious…. The two of us tried to enter the so-called white men’s room…. We were left behind in a pool of blood,” Lewis recounted.

Decades later, one of the attackers, then about 70 years old, brought his son with him to see Lewis at his office in D.C. The man apologized to Lewis and asked for forgiveness. Lewis held up this story as an example of the power of nonviolence and love in social justice.

“I forgive you, I accept your apology, and the three of us cried together. It says something about the power of the way of peace, the power of love.”

Lewis finished his talk with a determined call to action.

“We’ve made a lot of progress, we’ve come a distance, but we’ve still got a distance to go,” Lewis said. “There are forces in high places in America today that are trying to take us back…. We’re not going back…. So be kind. Be bold. Be courageous. Be brave. Do your part.”

Aydin discussed March’s purpose as expanding the story of the Civil Rights Movement, especially for those who know little of the Movement beyond the names of Dr. King and Rosa Parks.

“I never heard the stories of SNCC [Student Nonviolent Coordinating Committee],” Aydin said. “No one told me the power that young people had in this process…. We have to show them how another generation used nonviolence, what the principles of nonviolence are, because we need them now.”