LEAR: A Perfect Storm of Tragedy and Deceit 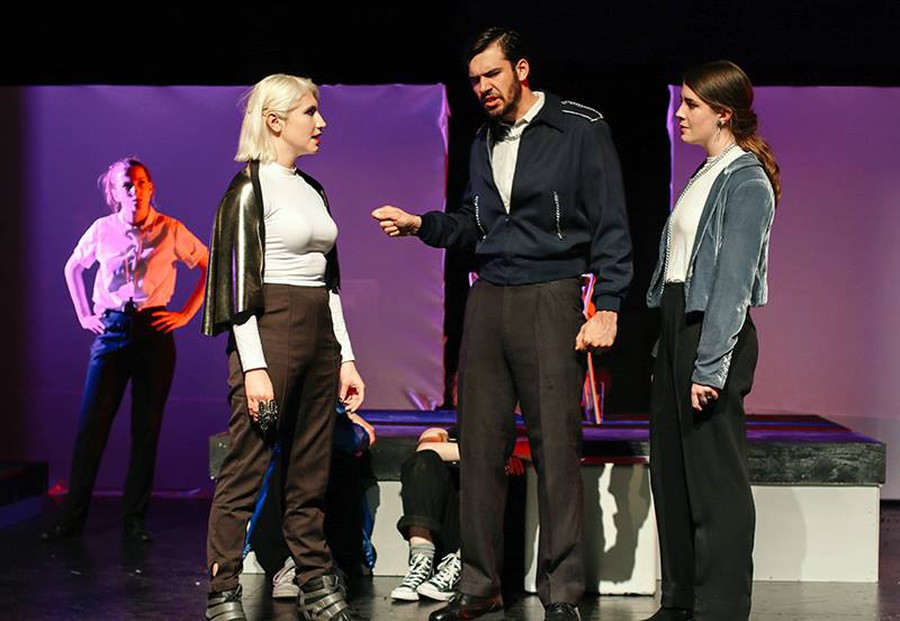 Springtime in Chicago isn’t all flowers and greenery. Even in these late days of May there have been terrible winds ripping through the trees on the Midway and huge puddles flooding the quad. In fact, it's just the right atmosphere for a production of Shakespeare's King Lear, a tale of deep familial violence and betrayal set in the midst of a raging storm.

By tradition, The Dean’s Men’s spring show is staged in various locations around campus. Unfortunately for this year’s production of LEAR, directed by third-year Remy Solomon and first-year Ian Grant-Funck, the overzealous weather moved the show inside on some nights. I, however, was lucky enough to catch the production outside in Logan Courtyard this past Thursday. A fairly traditional stage set with minimal screens and platforms was nestled in the space between Midway Studios and the glass walls of Logan. The space was the opposite of intimate; the encroaching coldness and darkness of the location lent an added eeriness to the sinister tone of the production.

King Lear is a challenging play to perform and a particular favorite of mine, so I wasn’t sure what to expect. Under Solomon’s direction, the company made several bold choices. They demonstrated an unwavering commitment to their chosen aesthetic, which I’ll call dystopian chic. Set in the “near future” of 2037, LEAR’s world is populated by characters wearing shiny fabrics, strappy boots, and deadly hand accessories without irony. Sisters Regan (third-year Peyton Walker) and Goneril (fourth-year Michaela Voit) stood poised on either side of the stage for most of the production, their accessorized apparel dripping villainy as they planned to disempower their father, the aging Lear (first-year Thomas Noriega).

An undercurrent of creepy, bass-backed sounds reverberated through the space during the performance, adding to the futuristic feel. Did this theme fit the production? Unclear—I did find myself craving some further connection between concept and Shakespeare’s original content. Was it pretty badass? Yes.

In a memorable moment during the show’s climax, an enraged Regan blinds the Earl of Gloucester (first-year Faith Shepherd). This production made sure the visual was visceral and stomach-churning. Walker’s bad-to-the-bone Regan, literally dressed to kill, lifted a black pump and impaled Gloucester’s first eye, then plucked out the other with her deadly metal finger accessories. Fake blood spurted everywhere, heavy bass blasted in the background, and the whole scene really tapped into the brutality at the core of the show. Once more, I found myself curious about the sexed-up, violent aesthetic choices that seemed to stray from the tragedy of the show. These decisions, however, were remarkably consistent throughout the production, an important and difficult task for any adaptation.

The choice of aesthetic wasn’t the only bold move of the show; LEAR made several interpretive decisions that deviated from the strict text of the play. My favorite, and the most effective, involved Cordelia (second-year Margaret Glazier). Due to a long period of estrangement from her family, Cordelia normally only appears at the beginning and end of the play. Some productions have the actor portraying Cordelia assume the role of the Fool, as the two characters never appear on stage at the same time. LEAR took this one step further: It established the Fool as Cordelia caring for and chiding her father while in disguise. The union of these two characters was a clear, effective artistic choice that brought Cordelia’s role to the forefront of the show.

Some of LEAR’s other modifications were more mystifying. Oswald (fourth-year Emma Glass), Goneril’s servant, was depicted as mute for the majority of the show, communicating only with gestures and a bell tied around his neck. Before his death, he suddenly spoke for the first time, to the audible confusion of the audience. In addition, LEAR brought the total death count of the tragedy down by two, ending with Regan and Goneril still standing and forming an alliance as the lights dim to blackness. I really didn’t know what to make of this change. Poor acoustics in the space and soft-spoken actors often made it difficult to catch some of the nuances of the plot.

That said, The Dean’s Men’s ingenuity is remarkable as they continue to produce a new Shakespeare adaptation every quarter. LEAR embraced the brutal emotions of its source material with an admirable fearlessness. Outside on that unforgettable, chilly spring evening, I felt I was navigating a complicated web of deceit and a brewing storm right along with the players on the stage.