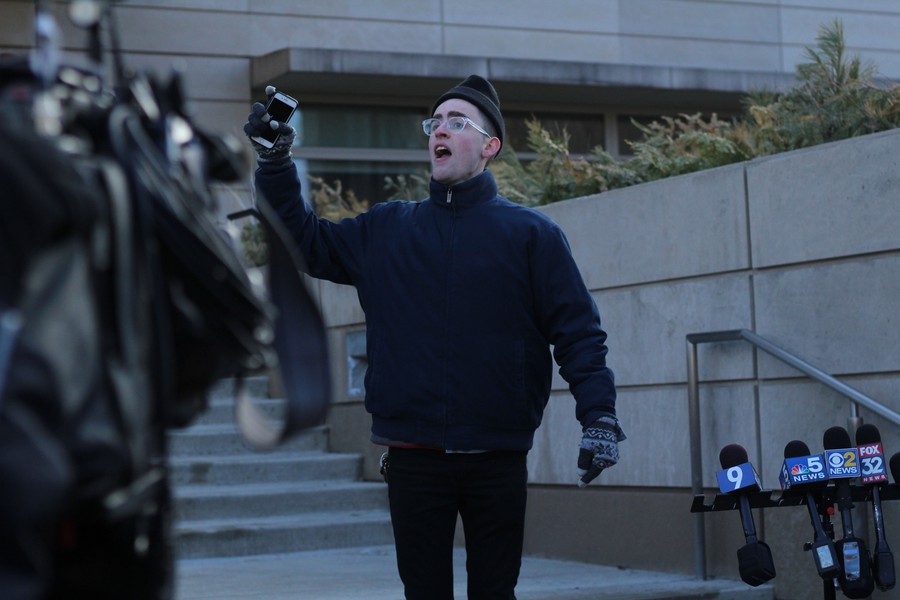 A mere 15 hours after The Maroon reported that alt-right strategist Steve Bannon had been invited by a Booth professor to speak on campus, approximately 100 protesters gathered outside the Booth School of Business, holding signs and chanting: “Say it loud and say it clear, stop inviting fascists here” and “Disinvite! Disinvite!”

Sam Joyce, a Young Democratic Socialists of America organizer, addressed the crowd. “[The administration is] saying that they value whatever it is that Steve Bannon is supposed to contribute over the values of inclusion, diversity, and making sure that everyone in the campus community feels like they have a place here.”

Bannon was invited to campus by Professor Luigi Zingales to take part in a debate on globalization and immigration. The date for the debate has not yet been announced, but according to Zingales, Bannon has confirmed his attendance.

The protest was organized by 11 student activist groups, including the Young Democratic Socialists of America (YDSA), UChicago Socialists, UChicago Student Action, and UChicago United. Protesters from community groups were also present, including a speaker from the local chapter of Veterans for Peace.

as a uchicago student, the planning started tonight

The News Office released a statement this morning reaffirming the University’s commitment to “the values of academic freedom, the free expression of ideas, and the ability of faculty and students to invite the speakers of their choice.”

Under current University policy, any recognized student group, department, or faculty member can invite speakers to campus without seeking approval from the administration. According to University News Office spokesperson Jeremy Manier, the administration had not been informed that Professor Zingales had been in contact with Bannon.

I believe in free speech, but I'm disappointed in my alma mater @UChicago for giving Steve Bannon a platform to spread his views. His promotion of white supremacy spread hate and intolerance across the country. We should not amplify his message. #twill https://t.co/Q5kSwAceGo

In a statement posted to Facebook, Zingales wrote that it is a “civic duty” to examine and engage with reactionary movements like Bannon’s, which have been spurred by an increase in globalization and immigration. “Whether you agree with him or not (and I personally do not), Mr. Bannon has come to interpret and represent this backlash in America,” he wrote. “I firmly believe that the current problems in America cannot be solved by demonizing [those] who think differently, but by addressing the causes of their dissatisfaction.”

A group of University professors has also released a statement condemning Bannon’s invitation. Their letter acknowledges the importance of freedom of expression in intellectual pursuits, but argues that “this cannot be taken to mean that white supremacy, anti-semitism, misogyny, homophobia, anti-Catholicism, and islamophobia must be afforded the rights and opportunity to be aired on a university campus.”

At press time, 44 professors have signed the letter.

I cannot begin to express how sickening this is. As a black person working at this university it feels like a punch in the gut. https://t.co/jfTWiHmr6y

The University of Chicago Democrats (UC Dems) Executive Board released a statement expressing their anger at the invitation: “Zingales’s decision to invite Bannon to speak forces [marginalized students] to be linked to and to implicitly support a man who considers them less than human, and whose thoughts on populism are little more than thinly-veiled white supremacism.

The UC Dems board statement acknowledges that Bannon has a right to speak, but that his ideas “contribute nothing to our intellectual life” and threatens many individuals on campus.

A statement by the Student Government Executive Slate echoes the sentiment: Zingales had the right to invite Bannon, it says, but he has "grossly misstepped" by doing so.

"We will soon announce resources and funding that students can leverage to send a strong and clear message to Bannon and the entire country," the statement read. "The invitation of one man should not implicate our entire institution in actively elevating a white supremacist, anti-Semitic, misogynistic, homophobic, anti-Catholic, and Islamophobic agitator."

The College Council has also drafted a resolution, which will likely be voted on next Tuesday.

President of the University of Chicago College Republicans (CR), Matthew Foldi, said in an e-mail to The Maroon that CR supports Bannon’s right to speak, though the organization never had an intent to contact Bannon and had nothing to do with Professor Zingales’s invitation.

“We support Zingales's right to invite him, just as we support the right of others to protest,” Foldi wrote. He also observed that this may be the first public chance for Bannon to be questioned about his involvement on the Trump campaign and his upcoming testimony in the Russia investigation, since he left Breitbart earlier this month.

At press time, the deans of the Booth School could not be reached for comment.

For UChicago Socialists organizer Everett Pelzman, the next step for activists is to begin planning for the future. He ended his speech by advertising a public organizing meeting—scheduled tomorrow at 3 p.m. at the University Church—to discuss how protests should continue.

In a statement to The Maroon, Pelzman said: “I hope the turnout is even greater when Bannon—or if Bannon—shows up.”

"I can hardly think of a more important issue for new citizens and business leaders of the world than the backlash against globalization and immigration..."