11 Grammy-Nominated Songs You Should Listen To 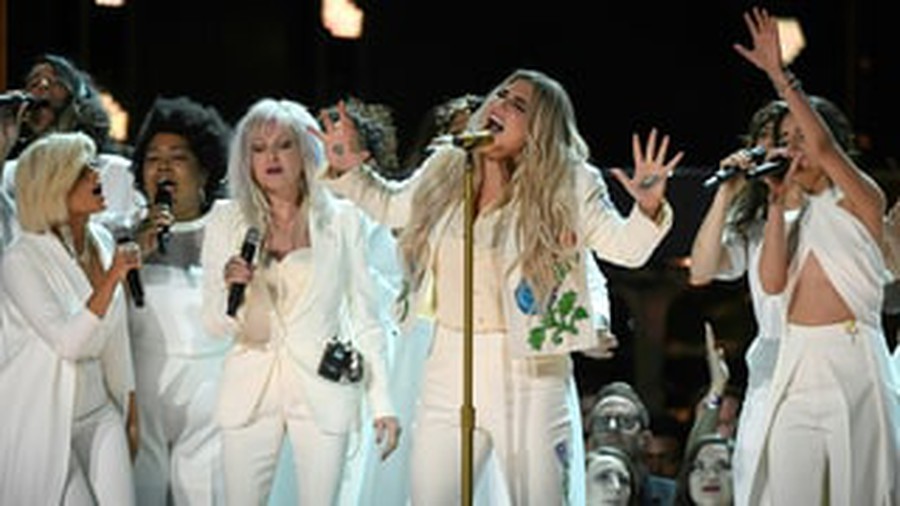 Kesha performed her Grammy-nominated single "Praying" wearing all white as part of the evening's stand in solidarity with the #MeToo movement.

The results are in and whether or not you think Jay-Z was slighted or Ed Sheeran is overblown, we've asked Maroon staffers to recommend their favorite songs from this year's Grammy-nominated albums.

Lorde’s "Melodrama" is the sweet spot of wallowing in nostalgia and wanting to dance my heart out. She’s incredible! —Giovanna DeCastro (Photographer)

I purchased Tyler, the Creator's "Flower Boy" in a bundle with a pair of socks. The socks are hot pink and super comfy. The album is pretty good too. —Patrick Lou (Copy Chief)

For an introduction to SZA’s luminous vocals, and how deftly she plays samples, melodies, and beats off against one another to create perfectly constructed songs, listen to “Broken Clocks.” Then listen to Ctrl. You'll thank me later. —Rosemarie Ho (Maroon Contributor)

Kendrick Lamar’s song “Humble” is a masterpiece; filled with double meanings that make statements about his personal life and the political context, this song ties his own relationship with humility together with the standards and ideals to which we are taught to aspire. —Brooke Nagler (Photo Editor and Deputy Arts Editor)

Even as a longtime fan of P!nk, I was amazed by her new song “What About Us”, a stunning recollection of her history with a loved one. What an icon. —Brooke Nagler (Photo Editor and Deputy Arts Editor)

Maybe it is Hannah Williams’s vocals transposed up an octave to echo the rhyme scheme and screams of the lyrics, or Jay admitting his emotional immaturity (despite being a decade older than his wife), but “4:44”—ice cold and brutal—reaches a reality that would not have been possible in an earlier album. —Andrew Harrington (Maroon Contributor)

“Feel It Still” has just the right amount of funky shimmer that gets under your skin and makes you tap your foot and bop your head along as you mouth: “I'm a rebel just for kicks, now/ I been feeling it since 1966, now” —Alexia Bacigalupi (Arts Editor)

“Radio” off of Sylvan Esso's Grammy-nominated album What Now is a send-up of the all the commercially viable boxes music executives have tried to force the band into, a screed against writing something catchy and empty for the radio. (But it's also still really catchy.) —Annie Nazzaro (Deputy News Editor)

Stile Antico's characteristically masterful performance of "Vox in Rama audita est" captures the very individual style of de Wert, a Franco-Flemish composer working in sixteenth-century Italy, who infused his liturgical music with dramatic use of dissonance and elements of secular genres to great expressive effect: here, depicting the anguish of a mother mourning her dead children. While the St. Paul Chamber Orchestra took the award this year in this category, Stile Antico was the only "classical" ensemble selected to perform at this year's ceremony. —Philip McGrath (Maroon Contributor)

There’s a reason Lorde dominated my Spotify “2017 Year In Review” playlist. “Green Light” is equal parts wounded betrayal and upbeat “dance it off” that makes it the perfect soundtrack for just about every mood. —Alexia Bacigalupi (Arts Editor)