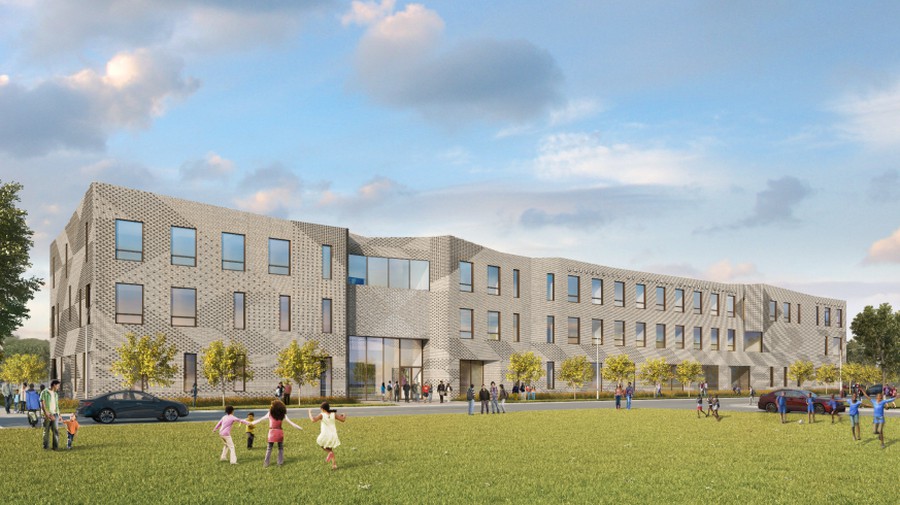 Rendering of the new Woodlawn campus of the University of Chicago Charter Schools.

On January 11, University of Chicago Charter Schools opened its new location at 63rd Street, the first development south of 61st street since a decades-old agreement not to extend further into Woodlawn.

Although the University never formally issued a statement revoking its 1964 agreement not to develop new property in Woodlawn beyond the 61st Street boundary, in 2016 the city provided a land grant for the high school (for the nominal cost of one dollar).

Kieran Palmer-Klein, director of the middle school and high school, pointed out that despite the historical importance of building beyond the 61st Street line, the new location is only blocks away from the original campus at 6420 South University Avenue.

“We’ve had a long history of operating in Woodlawn, and the new building is steps away from the building we left. So really, we look at it more as just the University supporting an upgraded facility for students and families, primarily from the Woodlawn community,” Palmer-Klein told The Maroon.

The school’s press release also frames the new location as part of its mission to “support key goals outlined in the Woodlawn Quality of Life Plan, including the revitalization of the 63rd Street corridor.”

Associate Director of Communications for Civic Engagement Kim Grimshaw Bolton told The Maroon that the decision to lift the development ban made sense in light of the University’s “strong presence” in Woodlawn, citing “quality of life initiatives” and the “community policing provided by the University of Chicago Police Department.”

“As a result of a more active institutional presence in Woodlawn, some community leaders have encouraged the University to identify projects (south of 61st Street) that could create mutual benefit for the University and the neighborhood,” Grimshaw Bolton said.

The relocation comes amid a wave of new development on the south side of campus, including the recently announced “Woodlawn Commons” residence hall just north of 61st Street, where the University intends to accommodate expansion by housing 1,200 students.

The $27.5 million new charter school development offers critical upgrades from the previous building. At the old location, the science labs had no electricity or working gas, and the school lacked a regulation-size gymnasium, so athletic teams practiced at the YMCA.

Todd Barnett, director of partnerships for the charter school, stressed the importance of having a home court for athletic events, noting that the boys basketball team held their first-ever home basketball game last month.

“Varsity players who’ve been playing on the team for four years have never had the opportunity to have a home opener,” he said. “For them, this was tremendous.”

The new building will serve approximately 650 students, in grades six through 12, primarily from Woodlawn and surrounding South Side neighborhoods. The population is 100 percent black students.

Barnett estimates that a student is admitted to the College from the charter school approximately every other year, a number strikingly at odds with the outcomes report of the other University-affiliated high school: the University of Chicago Lab School. Just blocks away, Lab has over 15 students matriculate to the College every year.

“Right now we do have two former students attending the University, but we obviously hope that number goes up,” Barnett said.

This article has been updated to clarify the nature of the agreement to depart from the 1964 ban on development.