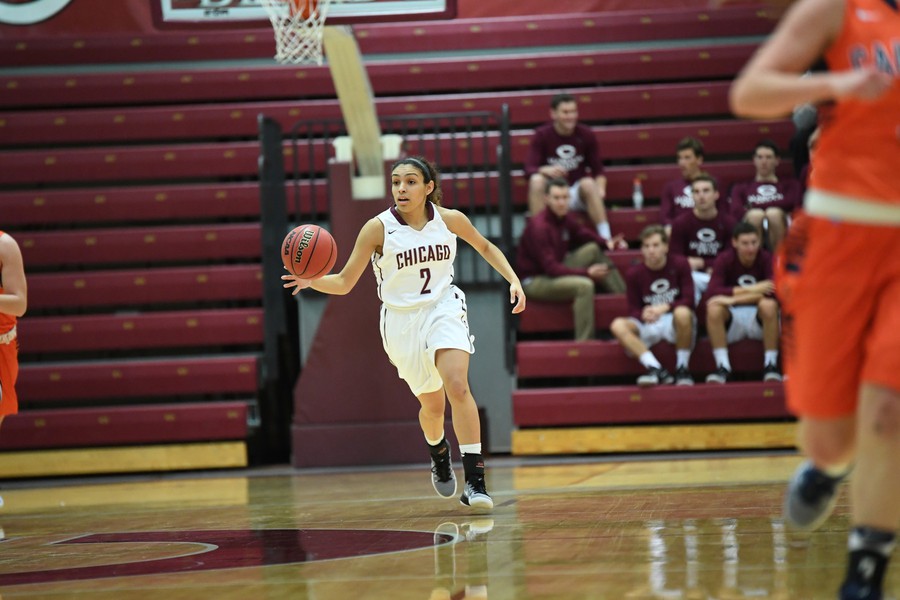 Second-year Mia Farrell brings the ball up the court.

The Maroon women’s basketball team sacrificed their winter breaks to train and play, and their hard work has really paid off. The Maroons improved to 9–2 heading into conference play.

Highlights from winter break include Chicago thrashing North Park and Earlham 78–36 and 93–64, respectively. In the first half against Earlham, the score remained close, but the Maroons absolutely ran away with the game in the second half, scoring 26 points in the third quarter and 25 in the fourth. Multiple players contributed to these high numbers. Second-year Mia Farrell led the team with 16 points, followed closely by first-year Meaghan O’Hara at 14 points and second-year Miranda Burt at 13 points. Against North Park, Burt led the offense with 21 points and first-year Marissa Igunbor earned 15 points. Second-year Taylor Lake led the team with 13 rebounds and fourth-year Elizabeth Nye chipped in with three assists.

The Maroons faced their fair share of close games, however. They defeated Elmhurst College 74–70 in an absolute thriller. At the half, Chicago was down by just a point, 29–28. After the half, the Maroons were boosted briefly to a lead by scoring sprees by Farrell and Burt. Elmhurst leveled the score again, however, at 65–65. It didn’t matter, as Farrell proved to be very effective and made four free throws to give the Maroons the win. Third-year Olariche Obi had a fantastic game with 21 points, 15 rebounds, four steals, and three blocks. This was Obi’s third double-double of the season. The University Athletic Association (UAA) awarded her with Athlete of the Week honors for her effort. In another tight game, the Maroons earned their seventh straight victory, defeating Wilmington 71–55 and winning the Fred Raizk Memorial Classic in the process. The first half was quite close, with Chicago barely holding onto a lead at 23–21 before points from O’Hara, third-year Jamie Kockenmeister, and Nye put the Maroons up 34–27 at the half. With the momentum in their favor, the Maroons put the pedal to the metal in the second half, building a big lead with a 22-point scoring spree in part thanks to 12 combined points by Lake and Nye. Farrell once again led the team in points with 16, earning the Most Valuable Player award of the tournament.

After a very successful run, the Maroons now head into conference play. According to Burt, the team has really built up their confidence pre-conference thanks to the strength of their schedule. “We have played a very tough non-conference schedule up to this point, and that gives our team a lot of confidence heading into UAA play as the teams we beat are very successful. We believe the UAA is the toughest conference in the country, so our non-conference schedule adds to our sense of preparation.” After a bit of a slow start to the season, “the team has learned that we need to focus on every single possession as well as finishing games. Once we realized this, we were able to turn close games into comfortable wins.” The Maroons will face Wash U this Saturday.