Peach Pit Turn on the Charm at Schubas Tavern 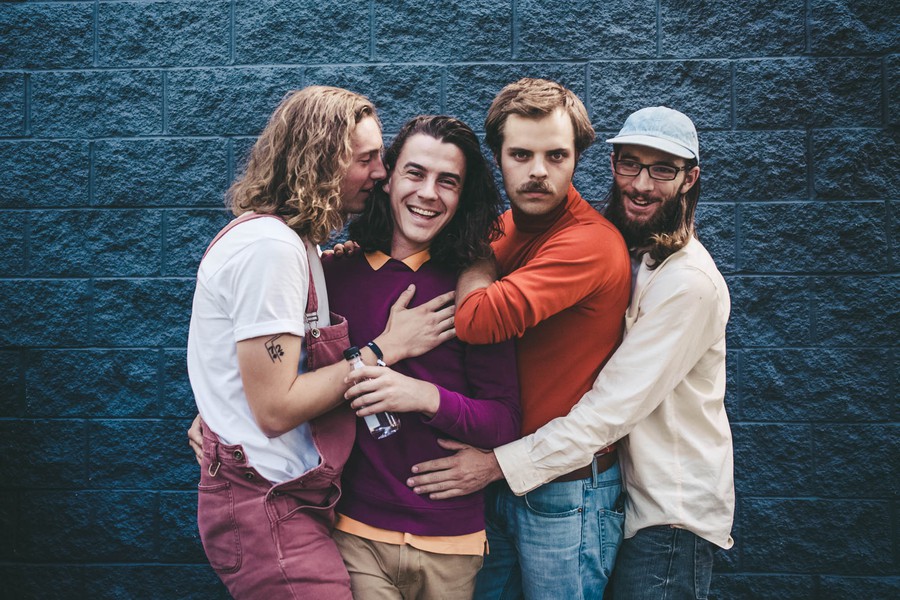 Anybody who attends a Peach Pit concert will know that they just want to be normal and to have fun playing music. And that is exactly what they did last Wednesday at Schubas Tavern, where they played a lively set to a sold-out crowd. The Vancouver-based indie pop band has seen their stock rise dramatically since the release of their 2016 EP, Sweet FA, and their much-welcomed return to Chicago has no doubt bolstered their tag as the indie scene’s worst-kept secret.

Schubas Tavern was already packed to the rafters by the time the opening act, Tennessee-based indie group Sun Seeker, took the stage. The quartet set the tone for the rest of the evening, rocking the crowd with their eclectic mix of psychedelic folk and bluegrass-influenced rock. Drummer Ben Parks was in particularly inspired form, drumming with a vigor that made it seem like he was center stage at the United Center, instead of in a tavern in Belmont. Together with bassist Asher Horton, Parks managed to keep Sun Seeker’s songs tight and focused. However, the set sagged at times in between songs, making it seem longer than it actually was. Although front man Alex Benick confidently regaled the audience with back-stories about their songs during these transitions, there was an overwhelming sense of expectation among many in the audience for the headline act of the night.

If Sun Seeker received lukewarm rapport at best from the crowd, Peach Pit received a far more rousing ovation when they appeared onstage, around 15 minutes later than anticipated. The wait proved to be worth its while, though, as Peach Pit went through their entire discography with considerable polish. They were consistently solid throughout their 45-minute set, hardly deviating from the studio versions of their songs. For some bands, this may belie a lack of originality. However, in this case, Peach Pit impressed by faithfully replicating the compressed, lo-fi sound that made “Sweet FA” and 2017’s Being So Normal so likeable. Chris Vanderkooy’s sparkly guitar riffs sounded as fresh as they did in the studio, counterbalancing Neil Smith’s vocal delivery, which oscillated effortlessly between deadpan and highly emotional. Peach Pit also debuted some new songs that demonstrated an evolution of their sound—in particular, “I’m Not Your Man” revealed a more wistful edge to their sunshine-pop sensibilities.

While all-time favorites like “Seventeen” and “Drop the Guillotine” predictably drew the greatest response from the audience, the gig truly shone during moments of improvisation. Some of the loudest cheers of the night were reserved for drummer Mikey Pascuzzi as he emerged from his drumkit at the end of “Hot Knifer” to play a harmonica solo (and for the first time ever on tour, according to Smith: “We had to do that in Chicago!”). And when Vanderkooy, who was brimming with charisma and stage presence throughout the set, clambered down from the stage to play the guitar solo on “Chagu’s Sideturn,” the roof must have come down at least a bit.

Improvised moments like these highlighted Peach Pit’s propensity for fun—there were many goofy stage moves and bad dance moves, and there were moments of levity between band members and the audience. Midway through the set, Smith gleefully remarked that Canada had legalized recreational marijuana earlier that very day, much to the joy of many of the audience members. In a rather amusing moment, members of the crowd started shouting suggestions for places to get the best Italian beef after Smith made an offhand remark about how they had nothing to do the next day. Clearly, the success of groups like Peach Pit, part of a new wave of indie bands amassing clout on digital platforms like YouTube and SoundCloud, is highly dependent on their symbiotic relationship with their fans.

Above all, in an era of popular music where “authenticity” itself has perhaps become a brand of its own, Peach Pit’s gig reflected how organic and genuine their music already is. At the end of the day, the concert felt like a group of friends playing music for their other friends. It remains to be seen whether this will be the case going into the future, when (not if—these guys really are that good) they eventually make it big and foray into the mainstream.