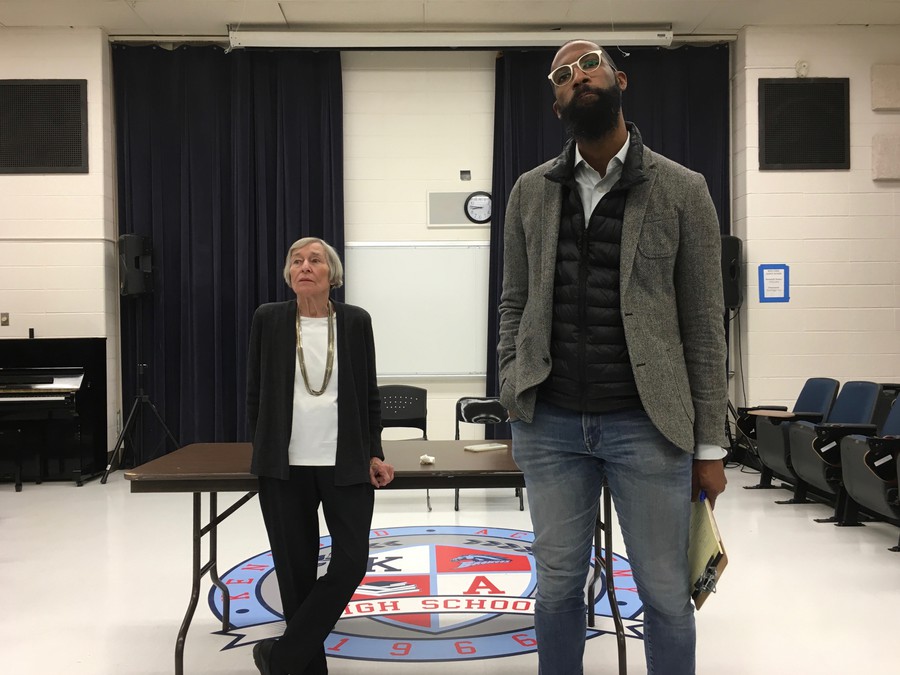 Retiring Illinois 25th District State Representative Barbara Flynn Currie has begun passing the reins to Curtis Tarver, who will succeed her this November.

On Tuesday, the two held a town hall in the Little Theater at Kenwood Academy, touching on education funding, gerrymandering, and other policy issues. More than 20 Hyde Park residents attended.

Currie has been the voice of the 25th District, which includes the eastern part of Hyde Park, for 40 years, and is the longest serving woman in Illinois legislature. Currie announced her decision to retire last September, kicking off a hotly contested primary race for the Democratic nomination.

Tarver, an attorney and small business owner, won the primaries with slightly over 25 percent of the vote and is now running unopposed, gaining a guaranteed the spot as Currie’s successor.

“He will be on the right side, or perhaps the left side,” she said, referring to Tarver’s strongly left-leaning policies, including ones concerning early childhood education and criminal justice reform.

Tarver elaborated on these policies as the attendees began asking questions.

One attendee asked how Tarver plans on funding pensions, an issue state policymakers have been struggling with for years, as allocating money toward pensions takes away funding from other programs, particularly public education.

Tarver discussed several different avenues of tackling the issue, but said that he would not have enough information to develop his own strategy until he entered office.

The attendees continued to press Currie and Tarver on budget and pension issues. When asked whether there was a conflict between education funding and pensions, Currie could not help but let out a small resigned laugh as she answered yes. Speaking to how there wasn’t enough money to go around, she said that “these two priorities are hard to prioritize.”

Yet, Tarver did have a few ideas about specifically improving funding for early childhood education programs, referencing ideas like the legalization of marijuana and institution of a progressive state income tax.

“It’s really about how we allocate it,” Tarver said, referring to the money that would be generated from the two measures. While the idea of allocation might seem obvious, he added, he believes it is a legitimate solution given Illinois’s previous budgetary issues.

Members of the community brought other issues to the table as well. A representative from a group named Ethos, a Presbyterian community group, brought up important concerns regarding brownfields and the development of the Tiger Woods–designed golf course that was being proposed for South Shore Nature Sanctuary.

When asked about gerrymandering of state districts and whether the process of drawing district boundaries should change, Tarver responded with, “I’m going to give the shortest answer I’ve given: No.”

Discussion about bipartisanship on criminal justice reform led Currie to say, “It’s a better environment than it was 10 years ago”—in stark contrast to the sharply polarized political divide that currently exists within other Illinois policy areas.

Overcoming that polarization was a concern for another young woman in the audience, who asked Tarver what he thought about the common threads and issues that could bring the district together. Tarver responded that the issues themselves are not drastically different, but the immediacy needed to tackle each one was different for every constituent.

“There are issues that unify all of us,” he said, “but it’s about prioritizing the issues.”

Tarver did not elaborate further, but he will come face-to-face with these issues once he takes office in January. Currie maintains confidence in her successor: “Curtis Tarver is going to go to Springfield and make a good difference.”

Curtis Tarver has emphasized education in his race for the open 25th district house seat.